Did you hear about the new Microsoft Surface Laptop? The usual suspects are claiming it’s a MacBook competitor, which is true insomuch as it is a laptop. In truth, though, the Surface Laptop isn’t a MacBook competitor at all for the rather obvious reason that it runs Windows, while the MacBook runs MacOS. This has always been the foundation of Apple’s business model: hardware differentiated by software such that said hardware can be sold with a margin much greater than nominal competitors running a commodity operating system.

Moreover, the advantages go beyond margins: the best way to understand both Apple’s profits and many of its choices is to understand that the company has a monopoly on not just MacOS but even more importantly iOS. That means Apple can not only capture consumer surplus on hardware, but developer surplus when it comes to app sales; that some apps are not made is deadweight loss that Apple has chosen to bear to ensure total control.

And yet, as far as regulators are concerned (and rightly so), the iPhone is simply another smartphone, and the MacBook really is competing with the Surface Laptop. The functionality is mostly the same, and if users value a sustainable advantage in the user experience Apple deserves the profits — and power — that follow.

Apple Inc. reported falling iPhone sales, highlighting the need to deliver blockbuster new features in the next edition of the flagship device if the company is to fend off rivals like Samsung Electronics Co. Investor confidence has been mounting ahead of a major iPhone revamp due later this year. Yet competitors released new high-end smartphones recently, putting pressure on Apple to deliver a device that’s advanced enough to entice existing users to upgrade and lure new customers.

Oh look! It’s an example of what I was just complaining about: yes, Samsung makes smartphones, and yes, they have high-end features. But — and this is the point that was forgotten the last time Samsung was held up as an iPhone threat — a Samsung smartphone does not run iOS. That has always been Apple’s trump card, and it was once again this past quarter. On the earnings call CFO Luca Maestri stated in his prepared remarks:

Revenue for the March quarter was $52.9 billion, and we achieved double-digit growth in the U.S., Canada, Australia, Germany, the Netherlands, Turkey, Russia and Mexico. Our growth rates were even higher, over 20% in many other markets, including Brazil, Scandinavia, the Middle East, Central and Eastern Europe, India, Korea and Thailand.

The numbers back that up:

To be clear, these numbers reflect more than just the iPhone; in the most recent quarter Apple’s most important product contributed 63% of revenue, which means some of the change in overall revenue was due to Mac (mostly thanks to increased ASP), Services, and Other Products (primarily Apple Watch and AirPods) growth, counterbalanced by the iPad’s continued slippage. Still, the iPhone is the most important factor, and while it seems quite clear that the iPhone 6 did pull forward upgrades from the iPhone 6S, the iPhone 7 is growing quite nicely.

Moreover, this sort of growth is exactly what you would expect given Apple’s iOS monopoly: iPhone users very rarely switch to Android, while a fair number of Android users switch to iPhone, which means that even in a saturated market Apple’s share should grow over time. Plus, that share increase will result in not only increased iPhones sales but ever-growing Services revenue, and, in the long run, increased sales of other Apple products as well.

This picture, though, is incomplete: it doesn’t include China.

Here are those revenue numbers once again, this time with the Greater China region:

I was from the very beginning of Stratechery both a big advocate of large-screen iPhones and a big bull on Apple’s prospects in China. I wrote after the launch of the iPhone 5C:

Is [the iPhone] out-of-reach for the vast majority of consumers? Yep. But it will be aspirational, something you put on the table to show others you can afford it. And, to be clear, there are a lot of people that can afford it. Saying stupid things like “the iPhone 5C is equivalent to the average monthly salary in China” belies a fundamental misunderstanding of China, its inequality, and its sheer size specifically, and all of Asia broadly. Moreover, when you consider a Mercedes is tens of thousands of dollars more than a Toyota (and on down the line in luxury goods, for whom Asia generally and China specifically is the largest market by far), $300 more isn’t that much.

Moreover, in China it’s Apple’s brand that is, by far, the biggest allure of the iPhone. Apps are free (piracy is mainstream), larger screens are preferred, and specs and customization move the needle with the mainstream far more than they do in the US. But no one else is Apple.

Of course those large screens did eventually arrive in the same timeframe that Apple launched on China Mobile: that is why those Q2 2015 numbers are so eye-popping (71% growth!). And you could certainly argue last year that, much like the rest of the world, Apple had pulled forward a huge number of would-be buyers (China was down more than the rest of the world, but about the same as the rest of Asia).1 However, that does not explain the weak results this year: every region in the world — especially the rest of Asia — is up, except for China, which is down 14%. Apple has a China problem.

In rather stark contrast to just a couple of years ago, when, in the midst of the iPhone 6 boom, Tim Cook was eager to sell the story of how many iPhone customers had not yet upgraded, this quarter the Apple CEO preferred to move the goalposts, telling analysts to wait for the next iPhone:

We’re seeing what we believe to be a pause in purchases on iPhone, which we believe are due to the earlier and much more frequent reports about future iPhones. And so that part is clearly going on, and it could be what’s behind the data.

But that is not what is going on in most of the world: plenty of folks — more than last year — are happy to buy the iPhone 7, even though it doesn’t look much different than the iPhone 6. After all, if you need a new phone, and you want iOS, you don’t have much choice! Except, again, for China: that is the country where the appearance of the iPhone matters most; Apple’s problem, though, is that in China that is the only thing that matters at all.

The fundamental issue is this: unlike the rest of the world, in China the most important layer of the smartphone stack is not the phone’s operating system. Rather, it is WeChat.2 Connie Chan of Andreessen Horowitz tried to explain in 2015 just how integrated WeChat is into the daily lives of nearly 900 million Chinese, and that integration has only grown since then: every aspect of a typical Chinese person’s life, not just online but also off is conducted through a single app (and, to the extent other apps are used, they are often games promoted through WeChat).

There is nothing in any other country that is comparable, particularly the Facebook properties (Facebook, Messenger, and WhatsApp) to which WeChat is commonly compared. All of those are about communication or wasting time: WeChat is that, but it is also for reading news, for hailing taxis, for paying for lunch (try and pay with cash for lunch, and you’ll look like a luddite), for accessing government resources, for business. For all intents and purposes WeChat is your phone, and to a far greater extent in China than anywhere else, your phone is everything.

Naturally, WeChat works the same on iOS as it does on Android.3 That, by extension, means that for the day-to-day lives of Chinese there is no penalty to switching away from an iPhone. Unsurprisingly, in stark contrast to the rest of the world, according to a report earlier this year only 50% of iPhone users who bought another phone in 2016 stayed with Apple: 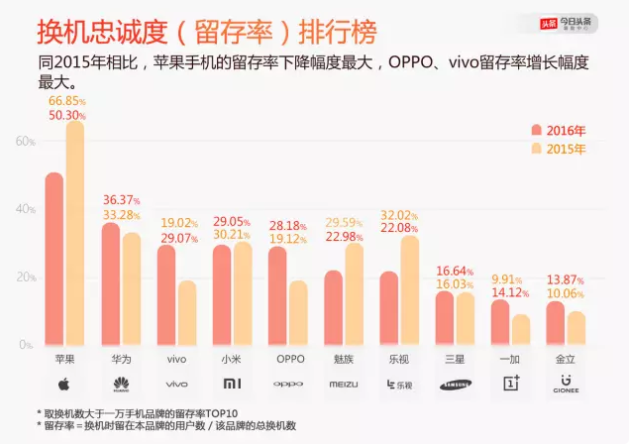 This is still better than the competition, but compared to the 80%+ retention rate Apple enjoys in the rest of the world,4 it is shockingly low, and the result is that the iPhone has slid down China’s sales rankings: iPhone sales were only 9.6% of the market last year, behind local Chinese brands like Oppo, Huawei and Vivo. All of those companies sold high-end phones of their own; the issue isn’t that Apple was too expensive, it’s that the iPhone 6S and 7 were simply too boring.

Perhaps the most surprising takeaway from this analysis is that Cook is right: there is reason to be optimistic about the iPhone 8. Rumors are that there will be an all-new edge-to-edge design that will stand out in the hand, or on the coffee shop table. And, of course, like any modern smartphone, it will run WeChat. And to be sure, an iPhone is still status-conferring: Apple is by no means doomed, and it’s possible if not probable that those China numbers will turn positive this fall.

That, though, is a long-term problem for Apple: what makes the iPhone franchise so valuable — and, I’d add, the fundamental factor that was missed by so many for so long — is that monopoly on iOS. For most of the world it is unimaginable for an iPhone user to upgrade to anything but another iPhone: there is too much of the user experience, too many of the apps, and, in some countries like the U.S., too many contacts on iMessage to even countenance another phone.

None of that lock-in exists in China: Apple may be a de facto monopolist for most of the world, but in China the company is simply another smartphone vendor, and being simply another smartphone vendor is a hazardous place to be. To be clear, it’s not all bad: in China Apple still trades on status and luxury; unlike the rest of the world, though, the company has to earn it with every release, and that’s a bar both difficult to clear in the abstract and, given the last two iPhones, difficult to clear in reality.