Jeff Bezos opened his 2016 letter to Amazon shareholders like this:

That’s a question I just got at our most recent all-hands meeting. I’ve been reminding people that it’s Day 1 for a couple of decades. I work in an Amazon building named Day 1, and when I moved buildings, I took the name with me. I spend time thinking about this topic.

To be sure, this kind of decline would happen in extreme slow motion. An established company might harvest Day 2 for decades, but the final result would still come.

Bezos went on to give advice about how to avoid Day 2, including “True Customer Obsession”, “Resist Proxies”, “Embrace External Trends”, and “High-Velocity Decision Making”. The company he manages then spent the next several years looking like it was in fact Day 2.

Consider this story in the Wall Street Journal about how Amazon reportedly adjusted its search algorithm to favor its own products:

Amazon.com Inc. has adjusted its product-search system to more prominently feature listings that are more profitable for the company, said people who worked on the project—a move, contested internally, that could favor Amazon’s own brands…The adjustment, which the world’s biggest online retailer hasn’t publicized, followed a yearslong battle between executives who run Amazon’s retail businesses in Seattle and the company’s search team, dubbed A9, in Palo Alto, Calif., which opposed the move, the people said.

Note how badly this decision fares relative to Bezos’ advice:

To be fair, Amazon is embracing the external trend of raising antitrust concerns, which are probably overblown given the company’s single-digit share of retail in the United States. There are no objections to Walmart, for example, having store brands or pay-for-placement programs, despite the fact that Walmart’s share of retail is about 33% larger than Amazon’s (8.9% of consumer retail spending in the U.S. versus 6.4 percent), so it’s not clear on what basis the digital equivalents of these programs would be prosecuted.

With regards to Bezos’ warning, though, the antitrust discussion is a moot point: companies that spend months or years arguing about the legality and customer friendliness of tilting the scales are usually well into Day Two.

This is hardly the only example of Amazon becoming obsessed with profitability on the margins in its retail operation over the last few years. For example, from Recode last November:

Over the past few months, Amazon has applied intense pressure to consumer brands across different product categories — seizing more control over what, where and how they can sell their goods on the so-called everything store, these people say. One apparent goal: To take more control over the price of goods on Amazon so the company can better compete with retailers. The power moves are also believed to be a prelude to a new internal system that Amazon has yet to launch called One Vendor. The new initiative will essentially funnel big brands and independent sellers alike through the same back-end system in a supposed effort to improve the uniformity of the shopping experience across Amazon on the public-facing side.

From the Wall Street Journal in December:

As Amazon focuses more on its bottom line in addition to its rapid growth, it is increasingly taking aim at CRaP products [“Can’t Realize a Profit”], according to major brand executives and people familiar with the company’s thinking. In recent months, it has been eliminating unprofitable items and pressing manufacturers to change their packaging to better sell online, according to brands that sell on Amazon and consultants who work with them.

From CNBC in March:

In recent months, Amazon has been telling more vendors, or brand owners who sell their goods wholesale, that if Amazon can’t sell those products to consumers at a profit, it won’t let them pay to promote the items. For example, if a $5 water bottle costs Amazon that amount to store, pack and ship, the maker of the water bottle won’t be allowed to advertise it.

From Bloomberg, also in March:

Amazon.com Inc. has abruptly stopped buying products from many of its wholesalers, sowing panic. The company is encouraging vendors to instead sell directly to consumers on its marketplace. Amazon makes more money that way by offloading the cost of purchasing, storing and shipping products. Meanwhile, Amazon can charge suppliers for these services and take a commission on each transaction, which is much less risky than buying goods outright.

From Bloomberg in May:

In the next few months, bulk orders will dry up for thousands of mostly smaller suppliers, according to three people familiar with the plan. Amazon’s aim is to cut costs and focus wholesale purchasing on major brands like Procter & Gamble, Sony and Lego, the people said. That will ensure the company has adequate supplies of must-have merchandise and help it compete with the likes of Walmart, Target and Best Buy.

The vendor purge is the latest step in Amazon’s “hands off the wheel” initiative, an effort to keep expanding product selection on its website without spending more money on managers to oversee it all. The project entails automating tasks like forecasting demand and negotiating prices which were predominantly done by Amazon employees. It also involves pushing more Amazon suppliers to sell goods themselves so Amazon doesn’t have to pay people to do it for them.

None of these decisions are necessarily wrong in a vacuum; what has been striking, though, is the drumbeat of Amazon Retail changes that seem primarily concerned about Amazon’s profitability. And, for the record, it has worked: 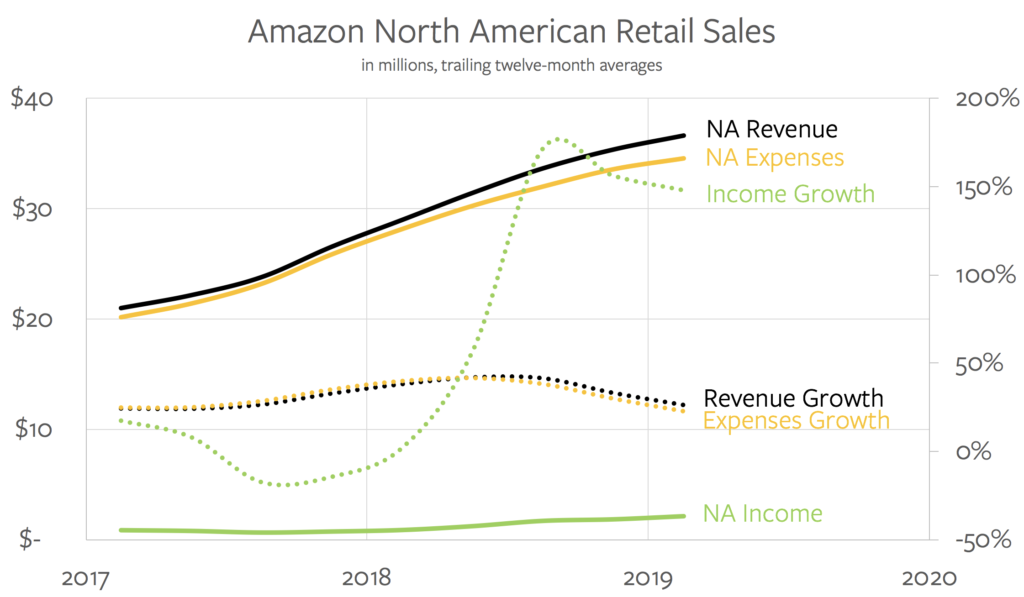 Throughout the second half of 2018 and the first part of 2019, Amazon flipped revenue and expense growth by just a smidge, which caused income to skyrocket on a year-over-year basis. It may have been Day 2 as far as Amazon’s prioritization of profitability above everything was concerned, but at least the company was, in Bezos’ words, “harvesting”.

Note, though, that the chart above is missing last quarter’s results, and for good reason: 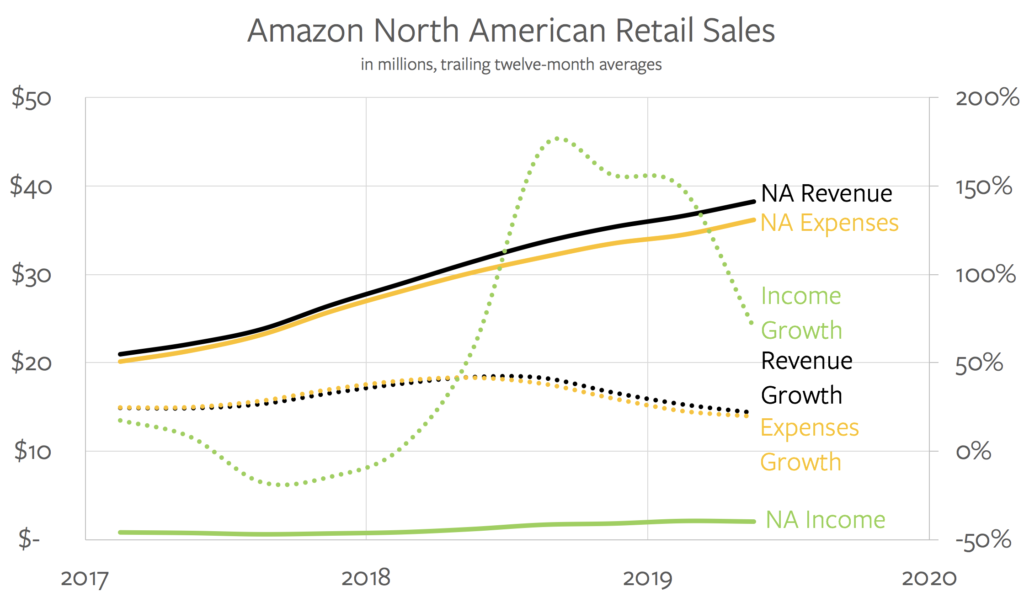 It’s a bit hard to make out, particularly because I am using trailing twelve-month averages (because of Amazon’s high seasonality), but expenses increased a lot more than revenue last quarter; in fact year-over-year income growth on a quarterly basis was actually -15%.

What changed is that Amazon decided to travel back in time — to Day One — and invest in what the company does best: massively difficult logistical problems that customers love having solved. Originally that was access to any book, then access to anything period, then access in two days, and now Amazon is committed to one.

We’re currently working on evolving our Prime free Two-Day Shipping program to be a free One-Day Shipping program. We’re able to do this, because we spent 20 plus years expanding our fulfillment and logistics network, but this is still a big investment and a lot of work to do ahead of us.

For Q2 guidance, we’ve included approximately $800 million of incremental spend related to this investment. And just to clarify, to give a little more information, we have been offering, obviously, faster than Two-Day Shipping for Prime members for years, one day, same day, even down to one to two hour delivery for Prime Now. So we’re going to continue to offer same day and Prime Now selection in an accelerated basis.

But this is all about the core free Two-Day offer evolving into a free One-Day offer. We’ve already started down this path. We’ve in the past months significantly expanded our one-day eligible selection and also expanded the number of zip codes eligible for one-day shipping.

The costs started to show up last quarter. From the company’s Q2 2019 earnings call, a quarter where Amazon missed on profits for the first time in several years:

In Q2, we had a meaningful step up in the one-day shipments, primarily in North America, and one-day volume was accelerating throughout the quarter…On the cost side, we talked last time about $800 million estimate of transportation cost to supply one day, the additional one day in Q2. We were a little bit higher than that number in total cost.

We saw some additional transition costs in our warehouses. We saw some lower productivity as we were expanding rather quickly, both local capacity in the off-season also in our delivery networks. We also saw some costs were moving: buying more inventory and moving inventory around in our network to have it be closer to customers. And we built not only that cost structure, but an accelerating cost penalty into our Q3 guidance that was released with our earnings today.

This is an initiative that clearly passes Bezos’ test:

It is also the opposite of harvesting: it is investing, and it seems more likely than not that Amazon’s upcoming results will look much more like the “Day One” company it was for years, with rapidly growing revenue and costs to match.

This Article comes at a bit of a weird time: in truth I had been considering writing a bearish Amazon article for several months as the penny-pinching anecdotes started to pile up. Tech companies rarely find sustainable growth by focusing on costs; if anything they find antitrust violations.

That announcement about one-day shipping, though, made me hold my fire. Spending a lot of resources on incredibly difficult logistical problems is precisely what makes Amazon so valuable, which means that the commitment to do just that — even with higher costs — is a reason to be bullish. The only problem is that the revenues I anticipate have not yet appeared in the quarterly results.

Still, this search news made me revisit the issue a bit early: tilting the field to favor the bottom line instead of doing what is best for customers is the surest sign of harvesting instead of investing, and it reminded me of my bearish thesis. I wonder if Amazon might not reconsider their approach to search now that the company is demonstrating a recommitment to growing the top line instead of the bottom.

That’s also why last week’s Apple event was encouraging: Apple may have its work cut out to be an effective services company, but by cutting iPhone prices and pricing its services offerings aggressively it is making its own moves towards investing, not simply harvesting. This is also why Facebook’s commitment to Stories was a good sign even if it entailed an earnings hit; its various attempts to wring engagement out of its core app through things like forced Instagram integrations and dating services run in the opposite direction. For Microsoft, meanwhile, The End of Windows meant the end of harvesting and a return to investing, much to investors’ benefit.

Perhaps the biggest question mark, though, is around Google: the company has gotten far more mileage than I ever expected out of mobile generally and cramming more ads into mobile search results specifically; both, though, particularly the latter, seem more like harvesting than investing. And, even when Google does invest, it is too often in projects far removed from customers and the forcing function that going to market entails.

This also may be why Google is the most susceptible to antitrust action of all the major consumer tech companies; the question as to what comes first, harvesting instead of investing or behaving anticompetitively, ceases to matter when you are operating at the scale of any of these companies. And, on the flipside, it strongly suggests that antitrust actions are a trailing indicator of a company that has peaked,1 not a causal force of decline.