Before the Internet, the nodes of communication were houses, and the killer app was the telephone. Presuming both you and I were in our respective houses, I could dial a number, and we could talk. It was marvelous, and in retrospect, primitive; real-time is much less interesting, and much more limiting, when it’s the only means of communication.

In the late 1970s, the computer came along, and while it made us incredibly more efficient, it didn’t truly alter the definition of communication. That took the world wide web, and its killer app: the browser.

Now the nodes of communication were computers, and while real-time was still a possibility, it was passive communication that defined the web. I, along with every individual and organization on earth, could create a web page, and you could view it, at a time convenient to you. The place, though, was only at the computer.

Seven years ago, the computer became pocketable, but the original use cases were about making the passive presentation of information accessible not just at a time convenient to the viewer, but also at any place: the web was now everywhere.

Still, it’s only recently that the killer app for this era, when the nodes of communication are smartphones, has become apparent, and it is messaging. While the home telephone enabled real-time communication, and the web passive communication, messaging enables constant communication. Conversations are never ending, and friends come and go at a pace dictated not by physicality, but rather by attention. And, given that we are all humans and crave human interaction and affection, we are more than happy to give massive amounts of attention to messaging, to those who matter most to us, and who are always there in our pockets and purses.

It is only in this context – that mobile dominates because our phones are always with us, and that messaging is its killer app – that you can make sense of Rakuten’s $900 million acquisition of Viber. Or, for that matter, understand why LINE is gearing up for a $10 billion IPO, or why WeChat has helped double Tencent’s stock price in the last year, or why both Twitter and Facebook/Instagram launched enhanced messaging products last fall.

The demand for attention, though, is only part of what is happening. After all, while capturing attention is critical for advertising-based companies like Twitter and Facebook, it would seem like it’s of lesser importance to an e-commerce giant like Rakuten. To that end, Hiroshi Mikitani, the co-founder and CEO of Rakuten, was remarkably concise about his motivation in an interview with Re/code:

“Messaging apps are taking over the world and, while search is one of the strongest platforms, what is happening in communications is very, very important…”

“We have content and games and commerce and markets and services, but they need the ability to reach out and talk to customers wherever they are,” said Mikitani. “With this, we can make buying more secure, but also more human.”

Think about commerce in the same time periods and contexts I recounted above: in the time of addresses and telephones, most commerce involved driving to the store. It was a purposeful and burdensome activity, rather like a scheduled phone call. In the era of the web, ecommerce became a word, but it still entailed going to a computer, a journey that seems simple, but in reality is often far removed from the motivation to buy, which may arise from an ad seen on TV, or a dress in a windows, or the recommendation of a friend. With mobile though, and particularly with messaging, the omnipresence of both a communications channel as well as a purchasing channel means the separation between the thought of buying and actually making a purchase is very small indeed.

The path to purchase is usually presented as a funnel, and looks something like this: 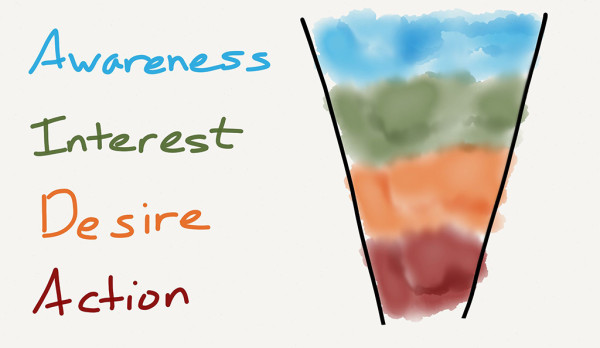 Google has made its fortune by living near the bottom of that funnel: people search for items they already desire. Reaching them at that moment means a much shorter and obvious path to action, i.e. purchase, and it’s is worth an incredible amount to advertisers on a per-user basis.

In absolute volume, though, awareness and interest make up the largest portion of advertising spending. This isn’t a surprise; the very concept of a funnel is that the top must be much wider than the bottom. This has also been the most difficult part of the funnel for technology companies to break into in a meaningful way; up till now the primary means of demand generation has been display advertising, and it hasn’t been very good. Facebook, though, is making massive strides here, particularly in mobile (I detailed why in an article last summer called Mobile Makes Facebook Just an App; That’s Great News).

Where messaging has a potential to make a mark is in the middle: moving customers from interest to desire and on to action, through one of the oldest and most reliable forms of advertising – direct contact.

In the house context, direct contact took the form of postal mail, and in the computer context, email. Both certainly became huge targets for abuse in the form of spam, but that’s because direct marketing works. Consider a legitimate marketing mail you might receive (analog or digital):

All of these positive factors apply to messaging. Here is one way it works (all of the examples I’m going to use are from LINE, but they almost all apply to WeChat as well): 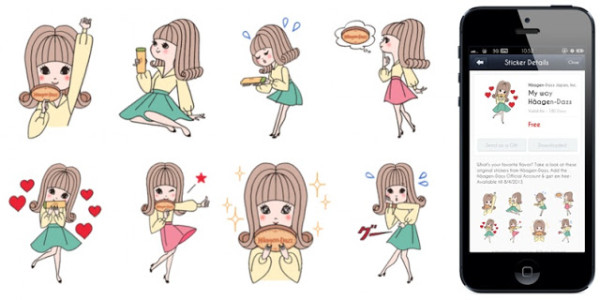 Perhaps this summer, when it’s particularly hot, Häagen-Dazs will send out a coupon to all those users for a discounted cup of ice cream. Many of those users will be out-and-about, likely in the vicinity of a Häagen-Dazs retail shop (they’re all over the place in Asia). And just like that customers have been moved to action.

This is an example using physical retail, but the effect is even more powerful with e-commerce: simply click a link wherever you are and you’re on the verge of action. To that end, LINE has been experimenting in Thailand with flash sales, and the results were pretty incredible: of the 22 million Line users in Thailand, 5.5 million users participated.

My wife has sent me a notification from a LINE game; to open it I need to download the app, which authenticates with my LINE chat app, and I’m good to go. The game, as you might expect, is simple, fun, and laced with in-app purchases. It’s why gaming revenue made up 60% of the company’s $120 million in revenue in 4Q 2013, which was a 450 percent increase year-over-year (20% was from for-pay sticker packs, and the rest from sponsorships like Häagen-Dazs and merchandise – LINE characters are the next Hello Kitty).

Revenue and growth numbers like these, along with the potential for mobile commerce, in some sense make $900 million for Viber seem cheap. But I’m not convinced that this purchase is going to turn out for Rakuten any better than Kobo or Buy.com, other 2nd-tier assets the company has acquired over the years. Viber does have strong user numbers, claiming 280 million registered users and 100 million monthly active users, and that is certainly a big part of the battle, but the creation of a meaningful platform is a significant next step that Viber (and WhatsApp) has not taken. A platform is about multi-sided markets; LINE and WeChat are so valuable because they not only have the users, but also advertisers, commerce sites, and developers.

Thus, while I’m skeptical of Rakuten and Viber, for LINE and WeChat the sky is the limit. Both have effectively built platforms on top of iOS and Android and smack dab in the middle of the most meaningful, and thus most-used, part of our lives: our communication and interaction with those we know and care about.

Facebook will continue to own people’s public representation of themselves, and the sort of voyeurism that entails is a good match for their display advertising. LINE and WeChat are similarly aligned with their monetization models: just as their interactions are more intimate, the connections between marketers and users are much more direct. They are perhaps the most important companies to come of age in the mobile era.