In his, to my mind, fair defense of Uber, Mark Suster made a very important observation about the reality of business:

Let’s put this into perspective. As somebody who has to rub shoulders with big tech companies often I can tell you that there is much blood spilled in the competitive trenches of Apple, Twitter, Facebook, Google and so on. Changes to algorithms. Clamping down on app ecosystems. Changing how third-parties monetize. Kicking ecosystem partners in the nuts.

It’s a brutally competitive world out there because there are extreme amounts of money at stake. I’ve been on the sharp end of it and it doesn’t feel nice. And I pick myself back up, dust off and think to myself that I need to think through the realpolitik of power and money and competition and no matter how unpleasant it is – it’s a Hobbesian world out there. It ain’t pretty – but it’s all around us.

This is particularly relevant to Uber: the company is looking to raise another $1 billion at a valuation of over $30 billion, and, as I wrote when the company raised its last billion, they are likely worth far more than that. Still, though, skeptics about both the size of the potential market and the prospects of Uber in particular are widespread, so consider this post my stake in the ground1 for why Uber – and their market – is worthy of so many sharp elbows. I expect to link to it often!

There are three perspectives with which to examine the competitive dynamics of ride-sharing:

I will build up the model that I believe governs this market in this order; ultimately, though, they all interact extensively. In addition, for these models I am going to act as if there are only two players: Uber and Lyft. However, the same principles apply no matter how many competitors are in a given market.

Ride Sharing in a Single City

Consider a single market: Riderville. Uber and Lyft are competing for two markets: drivers and riders. 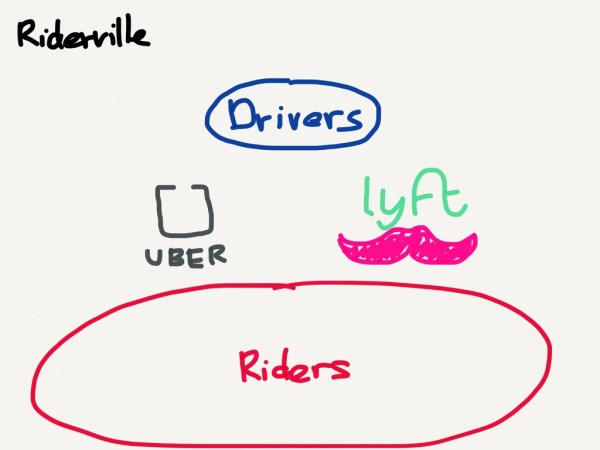 There are a few immediate takeaways here:

However, the driver and rider markets do interact, and it’s that interaction that creates a winner-take-all dynamic. Consider the case in which one of the two services – let’s say Uber – gains a majority share of riders (we’ll talk about how that might occur in the next section):

In this scenario Lyft by necessity moves in the opposite direction:

The end result of this cycle, repeated over months, looks something like this: 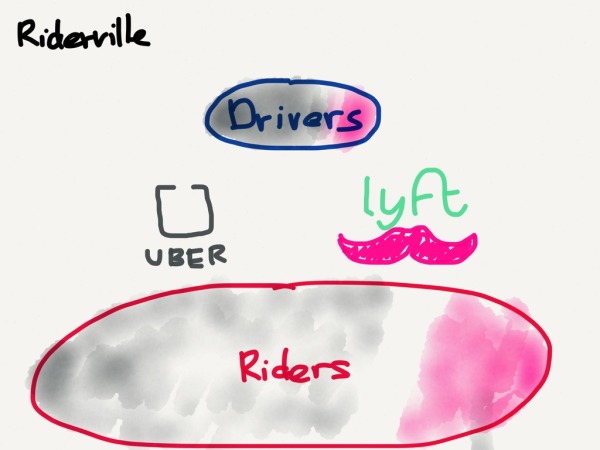 There are three additional points to make:

In summary, these are the key takeaways when it comes to competition for a single-city:

Ride Sharing in a Multiple Cities

It is absolutely true that all of the market dynamics I described in the previous section don’t have a direct impact on geographically disperse cities, which is another common objection to Uber’s potential. What good is a network effect between drivers and riders if it doesn’t travel?

There is, however, a relationship between geographically disperse cities, and it occurs in the rider market, which, as I noted in the previous section, is the market where the divergence between the dominant and secondary services takes root. Specifically:

Most important of all, though, is the first-mover effect. In any commodity-type market where it is difficult to change consumer preference there is a big advantage to being first. This means that when your competitor arrives, they are already in a minority position and working against all of the “rich get richer” effects I detailed above. 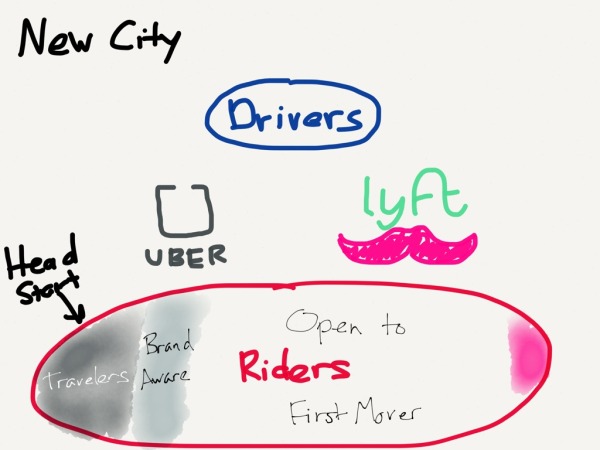 This explains Uber and Lyft’s crazy amounts of fundraising and aggressive roll-out schedules, even though such a strategy is incredibly expensive and results in a huge number of markets that are years away from profitability (Uber, for example, is in well over 100 cities but makes almost all its money from its top five). Starting out second is the surest route to finishing second, and, given the dynamics I’ve described above, that’s as good as finishing last.

What I’ve described up to this point explain what has happened between Uber and Lyft to-date. Still, while I’ve addressed many common objections to Uber’s valuation in particular, there remains the question of just how much this market is worth in aggregate. After all, as Aswath Damodaran, the NYU Stern professor of finance and valuations expert detailed, the taxi market is worth at most $100 billion which calls into question Uber’s rumored $30 billion valuation.

However, as Uber investor Bill Gurley and others have noted, Damodaran’s fundamental mistake in determining Uber’s valuation is to look at the world as it is, not as it might be.4 Moreover, this world that could be is intimately tied to the dynamics described above. I like to think of what might happen next as a series of potential tipping points (for this part of the discussion I am going to talk about Uber exclusively, as I believe they are – by far – the most likely company to reach these tipping points):

The implications of this analysis cannot be underestimated: there is an absolutely massive worldwide market many times the size of the taxi market that has winner-take-all characteristics. Moreover, that winner is very unlikely to be challenged by a new entrant which will have far worse liquidity and an inferior cash position: Uber (presuming they are the winner) will simply lower prices and bleed the new entrant dry until they go out of business.

To put it another way, I think that today’s environment where multiple services, especially Lyft, are competing head-on with Uber is a transitional one. Currently that competition is resulting in low prices and suppressed driver wages, but I expect Uber to have significant pricing power in the long run and to be more generous with drivers than they are now, not for altruistic reasons, but for the sake of increasing liquidity and consistent pricing.

In short, Uber is fighting all out for an absolutely massive prize, and, as Suster noted, such fights are much more akin to Realpolitik. As Wikipedia defines it:

Realpolitik is politics or diplomacy based primarily on power and on practical and material factors and considerations, rather than explicit ideological notions or moral or ethical premises

It’s ethics – or, to be more precise, Uber’s alleged lack of them – that has been dominating the news most recently, and is what inspired Suster’s post. And, to be very clear, I can understand and share much of the outrage: in my Daily Update I have compared Uber to Wall Street and said that Emil Michael should be fired (both links members-only) for his comments suggesting Uber might investigate journalists – Sarah Lacy in particular – who disparage the company.6

However – and one of the reasons I’m writing this article – I am also very aware of just how much is at stake in this battle. Lyft has raised $332.5 million from some very influential investors, and I don’t for a minute believe that they don’t want to win just as badly as Uber does. It’s perfectly plausible, if not probable, that Lyft and its backers, overmatched in a head-on battle with Uber, are conducting a guerrilla campaign with the aim of inspiring so much disgust in riders that Uber’s liquidity advantages start to slip (and to be clear, such a campaign – if it exists – is only possible because Uber’s management speaks and acts poorly frequently).7

To be perfectly clear, I don’t know anything further about this situation – or other recent Uber PR fiascos, like this Verge piece about stealing Lyft drivers – beyond the size of the potential prize, as detailed here, and the reality of human beings and their incentives in the presence of such outsized rewards. In my experience the truth ends up being far more gray than the press – which really hates threats to journalists – has characterized this most recent episode.

In fact, in some ways I’m actually far more concerned about Uber’s perceived lack of ethics than most, because if I’m right, then Uber is well on its way to having monopoly power over not just taxi services but a core piece of worldwide infrastructure, and nothing about this crisis gives me confidence in the company’s ability to manage that gracefully.8 I get that Uber’s willingness to fight unjust laws is what got them to this point, but as James Allworth and I discussed on the most recent episode of Exponent, there is a deeper moral code that ought to govern Uber’s actions. Moreover, Uber needs rider goodwill to prevail in the many markets where it is facing significant regulatory resistance: it is local citizens who determine whether or not local laws and regulations will be changed to accommodate Uber, and Uber is making it very difficult to rationalize advocating for them, or, if my Twitter account is any indication, to even ride with them.

Ultimately, this blog generally seeks to analyze business, not render moral judgment or tell anyone what products or services they should or should not use. I myself am mixed: I plan on spending some time in the white part of that graph above, at a minimum. I hope, though, that you now appreciate exactly what is at stake and why so many elbows are being thrown.