I’m going to jump right into some very fair questions that were raised about yesterday’s piece.

Are Ebooks Declining, or Just the Publishers?

I framed yesterday’s piece Disconfirming Ebooks as the search for, well, disconfirming evidence about Aggregation Theory, which, I believe, has the potential to provide a framework for understanding how the Internet will fundamentally remake traditional industries. To that end I was very interested as to why ebooks, according to this New York Times article, seemed to be behaving differently than I expected: specifically, why were they declining?

To my regret, and in a rich bit of irony, I failed to research disconfirming evidence for the New York Times’ conclusion that ebook sales were indeed dropping.

Fortunately, the Author Earnings blog took no such shortcuts and came to some different conclusions. I strongly suggest reading the whole thing, but here are some pertinent excerpts:

The widely-heralded “plateauing” of the US ebook market has gotten plenty of press over the last 18 months, fueled primarily by these reports of declining ebook sales from the AAP, from Nielsen, and in the released quarterly financials of the Big Five. Traditional publishers and publishing industry pundits are claiming that the broader US ebook market has now flattened, or is even shrinking…

A lot of the confusion stems from this: in nearly all media coverage of the AAP’s declining ebook revenue, their sales — the sales of just 1,200 traditional publishers — are being conflated with the overall sales of the entire US ebook market…

Here at AE, over the last seven quarters we have steadily built up a comprehensive database of quarterly cross-sectional snapshots of the Kindle store, each of which captures between 45% and 60% of Amazon’s daily ebook sales. And while Amazon’s Kindle store alone doesn’t comprise the entire US ebook market, it does account for 67% of all traditionally-published ebook sales by most accounts.

AE’s conclusions, captured in this chart, certainly seems to suggest that the original Aggregation Theory thesis — that suppliers (authors) would be unbundled from distributors (publishers) — is exactly what is happening: 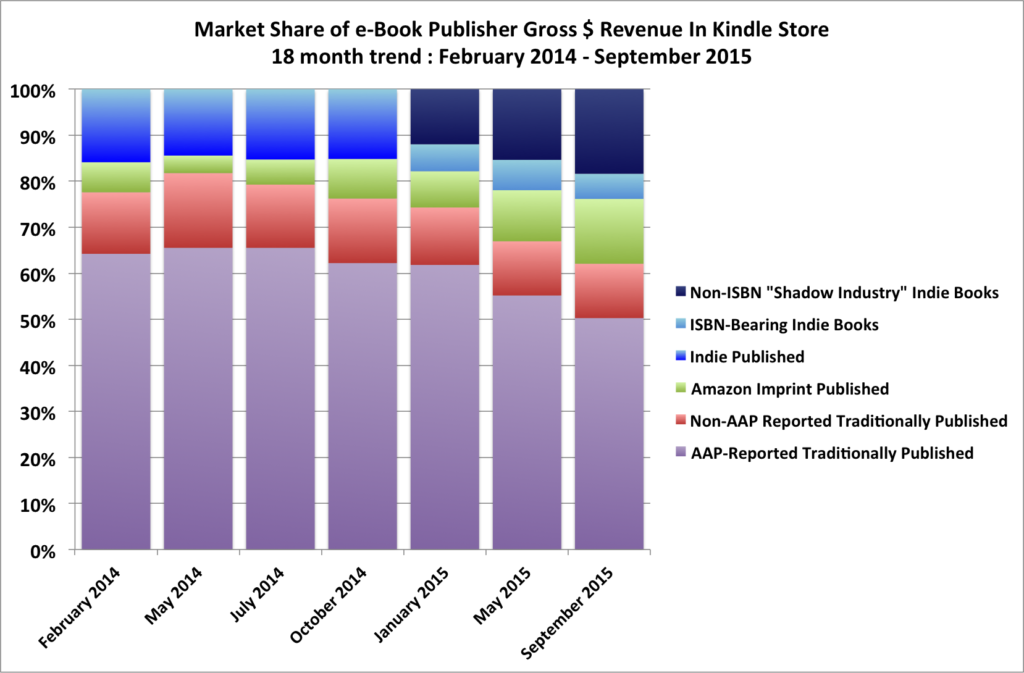 That is a pretty stark shift from the big publishers to independents (and it’s present in units as well).

However — and in the spirit of seeking disconfirming evidence! — I’m not sure exactly what this data says. Specifically, note that it only shows share of ebooks, not total sales. And, in fact, if you dig into the underlying data, it turns out that despite this shift Ebook sales are at best flat. I compared the Author Earning’s blog’s May 2015 report to its May 2014 report (to best match the data in the New York Times story, which is for the first five months of the year) and found that publisher ebook revenue is only up 1%, while Amazon’s revenue is down 1% (which, it should be noted, contradicts the company’s public statements).

Moreover, I’m not sure how much stock to put in these numbers: as best I can tell the Author Earning’s blog takes snapshots of the entire Amazon store on a single day, which has two problems: there could be an outlier effect, depending on what is happening that day, and given Amazon’s push towards its own labels and to independent publishers in general there is likely a stronger representation of independent writers in Amazon’s data.

Ultimately, I actually do think most of my conclusions in Disconfirming Ebooks holds. Ebooks aren’t nearly as revolutionary as you might expect, in part because they’re basically like online travel agents: a more convenient mechanism for what actually exists. That said, one takeaway from the Author Earning’s blog data is that books do seem to be very elastic: it seems obvious that the shift to agency pricing and associated higher prices has a direct connection to the falling share for big publishers in the ebook market. And, beyond that, the fact that there is any shift at all away from publishers to directly dealing with Amazon is very much inline with the original formulation of the theory.

That said, based on some of the responses I got, I think many folks missed the implications of my conclusion:

There is one more point though: books don’t exist in a vacuum. The implication of ebook sales falling while remaining 20% of the industry is that the industry itself is in decline. Ultimately, in the grand competition that is the market for consumer attention, the fact that books aren’t really improving while everything else is getting better means the publishers may in the end be celebrating the most pyrrhic of victories.

If ebooks don’t really modularize books, that doesn’t mean modularization isn’t happening. Consider this blog: the length of a standard book is about 64,000 words which just so happens to be about how many words I write in a month-and-a-half! Basically, since the launch of the Daily Update, I’ve written the equivalent of about 10 books.

Moreover, the time you all spend reading this update has to come from somewhere: attention is the ultimate zero sum game. By my count I have basically reduced ebook sales by the tens of thousands, in part by breaking up what in the past may have been my book into many component parts. That, ultimately, is probably the true modularization: ideas, not books.

Sadly, I wanted to prove this was the case: I spent nearly eight hours today trying to massage the Author Earning’s data to discover which types of books had increased or decreased over the last year. Unfortunately, that meant dealing with an Excel file with 197,225 lines, and after about my 30th crash (not exaggerating), I had to give up. For today, anyways — I’m going to give it one more go after I finish this (for good reason!) late update.

Oyster Goes Out of Business

Oyster, a company that provides a Netflix-like book subscription service, is shutting down. And most of its team is heading over to Google. In a blog post on Monday, Oyster’s founders said they were “taking steps to sunset” the company’s service, which launched in 2012. “We believe more than ever that the phone will be the primary reading device globally over the next decade,” they wrote. “Looking forward, we feel this is best seized by taking on new opportunities to fully realize our vision for ebooks.”

It’s a nice vision, but the reality is that Oyster had horrid economics from the get-go.

First off, as soon as a reader read a very low number of pages, Oyster had to pay the publishers the cost of the full book — which, you’ll note, is about the same price as Oyster’s monthly fee. It was an idea that didn’t make sense on its face.

Still, I can’t really fault the publishers. One of the issues for the book industry is that it is a niche market: 23% of Americans didn’t read a book at all in 2014, while only 28% read more than 10. From Oyster’s perspective they needed to somehow secure the 72% of people who read 10 or fewer books; from the publishers’ perspective they couldn’t afford to let that 28% get away with only paying $120 for books in a year. Remember, the key characteristic of a niche business is that the business model is all about maximizing revenue per user, not about reaching everyone, and given that the publishers ultimately had the power thanks to their ownership of the IP, it was their business model preferences that won out in the end.

Of course, the one company with the power to push back against the publishers is Amazon, and I do think this episode gives additional color to Kindle Unlimited, Amazon’s own subscription program that, crucially, pays authors based on the number of pages read. It’s friendlier to readers and more sustainable to Amazon, and only possible because Amazon has the huge share of non-major-publisher titles listed above.

This is the other critical piece of Aggregation Theory that I only mentioned tangentially: the power of the aggregators ultimately stems from their ability to attract, marshal, and ultimately monopolize consumers: that is why Netflix is increasingly getting more and more power in video, and is why Apple had power in music back in the 2000s. Only Amazon has that power in books, and needless to say both Kindle Unlimited and independent publishers bear watching. I’ll be keeping track on this, well, blog.

There’s actually been a fair number of interesting media stories this week, and given that we’re already in the muck I might as well comment on three of them: