Over the last few weeks and months there has been increasing alarm that today, September 16, is a critical one for publishers — and by critical, I mean the diagnosis that most publishers will soon be in critical condition. After all, today Apple releases iOS 9 with support for “content blocking extensions” which will effectively enable ad blockers for Safari, iOS’s default web browser.

That it’s Safari is important; the concern about ad blockers is, for now, a bit overwrought given that a much larger proportion of page views for most publishers comes from Facebook, which, along with Twitter and most other social networks, uses a classic web view controller that isn’t affected by the new content blockers.1 However, while the concern over ad-blockers may be too early, publisher angst is arguably too late: if iOS 9 ad blockers do end up causing serious harm it is only because the publishers have been living in an unsustainable bubble that is going to pop sooner rather than later. 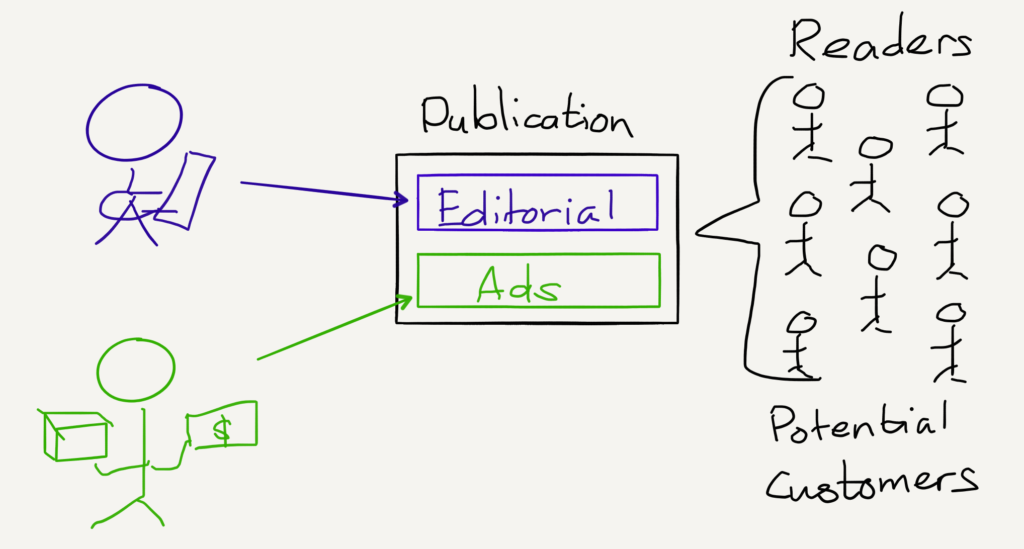 It was also a great gig for the journalists. Sure, most didn’t get rich, but they received a different sort of compensation: the dispensation from needing to worry about making money. As for the advertisers, where else were they going to go? Radio and TV took their share of advertising dollars from newspapers, but both formats had only limited inventory given the fact there were a finite number of channels (or stations) and only 24 hours in a day.

The shift from paper to digital meant publications could now reach every person on earth (not just their geographic area), and starting a new publication was vastly easier and cheaper than before. This had two critical implications:

This first point is obvious and well-known, but the importance of the second can not be overstated: publishers had long taken advertising for granted (or, as the journalists put it, had erected a “separation of church and state”) under the assumption they had a monopoly on reader attention. The increase in competition destroyed the monopoly, but it was the divorce of “readers” from “potential customers” that prevented even the largest publishers from profiting much from the massive amounts of new traffic they were receiving. After all, advertisers don’t really care about readers; they care about identifying, reaching, and converting potential customers. And, by extension, this meant that differentiating ad inventory depended less on volume and much more on the degree to which a particular ad offered superior targeting, a superior format, or superior tracking.

This bifurcation in incentives has resulted in a plethora of ad networks: publishers collectively provide real estate in front of collated readers, while it is the responsibility of the ad networks to identify and track prospective customers on behalf of advertisers. Note, though, the orthogonality of this relationship: publishers and ad networks are working at cross-purposes. 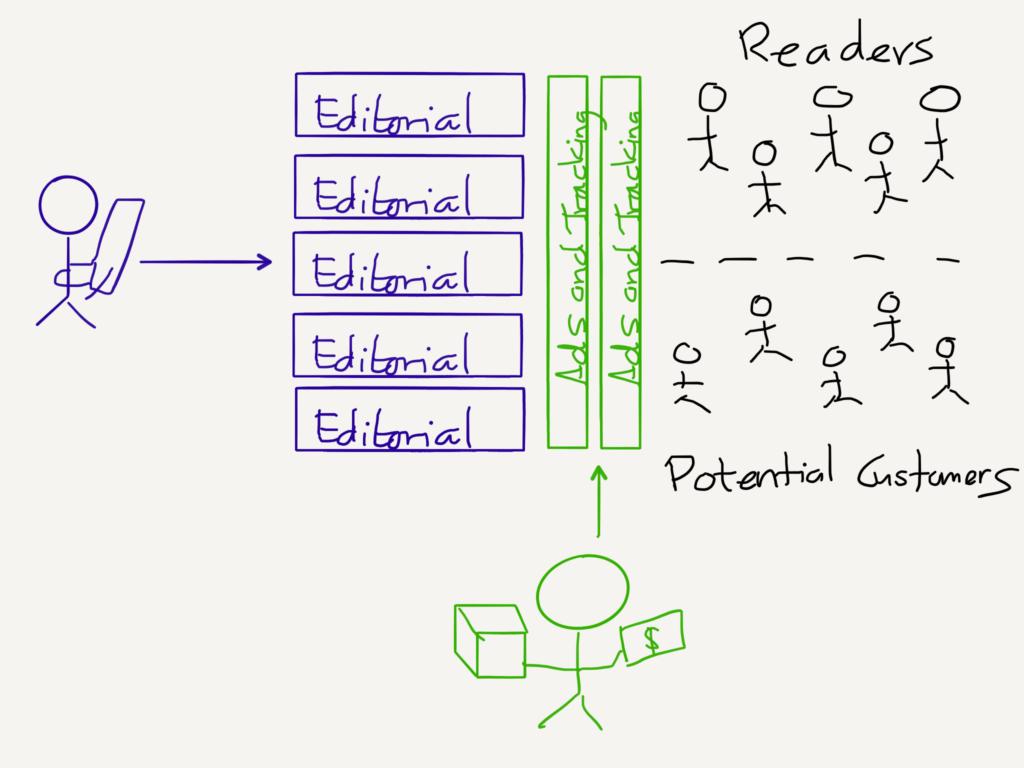 The result is that ad networks don’t really care about the readers — which is a big reason Why Web Pages Suck — and on the flip-side publishers don’t really care about the advertisers, resulting in click fraud, pixel stuffing, ad stacking, and a whole host of questionable behavior that is at best on the edge of legality and absolutely not in the advertisers’ interest.

As with any other company or industry built on fundamentally misaligned incentives, this is unsustainable.

The above graph shows the inefficiency of this arrangement: publishers and ad networks are locked in a dysfunctional relationship that doesn’t serve readers or advertisers, and it’s only a matter of time until advertisers — which again, care only about reaching potential customers, wherever they may be — desert the whole mess entirely for new, more efficient and effective advertising options that put them directly in front of the people they care about. That, first and foremost, is Facebook, but other social networks like Twitter, Snapchat, Instagram, Pinterest, and others will benefit as well: 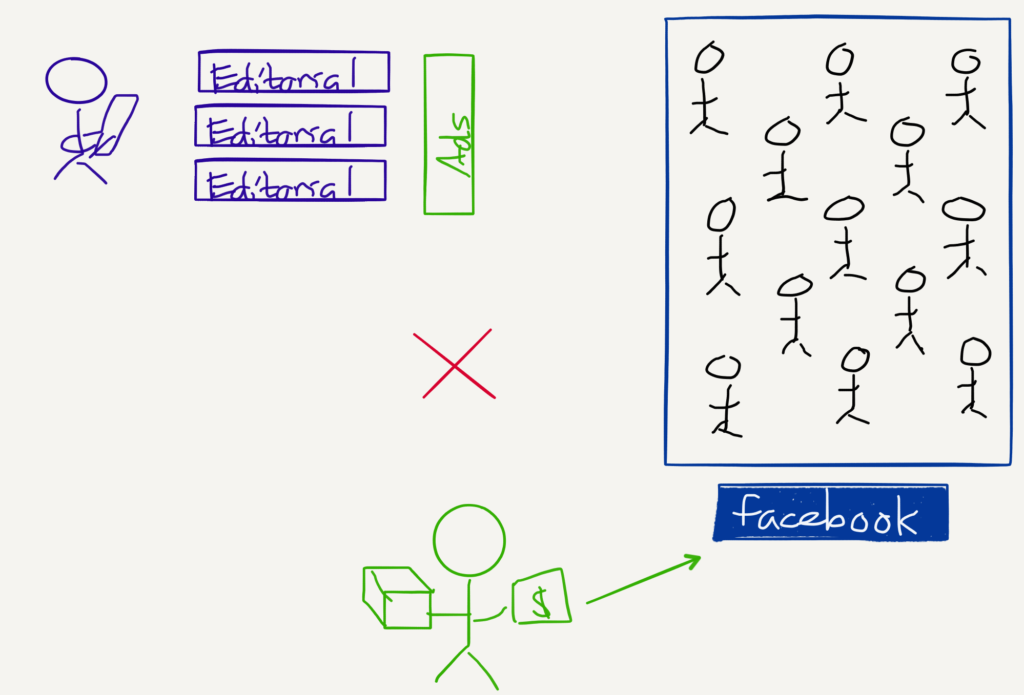 Notice that none of this depends on the adoption of ad-blockers. Indeed, ad blockers don’t really hurt advertisers that much anyways: an ad that is blocked is one that is not paid for, meaning the pain falls entirely on publishers. But, as I just noted, the truth is that advertising isn’t long for the majority of online publishing anyway.

What Should Publishers Do?

It is easy to feel sorry for publishers: before the Internet most were swimming in money, and for the first few years online it looked like online publications with lower costs of production would be profitable as well. The problem, though, was the assumption that advertising money would always be there, resulting in a “build it and they will come” mentality that focused almost exclusively on content production and far too little on sustainable business models.

The truth is most publications are trying to do a little bit of everything: gain more revenue per user here, reach more users over there. However, unless you’re the New York Times (and even then it’s questionable), trying to do everything is a recipe for failing at everything; these two strategies require different revenue models, different journalistic focuses, and even different presentation styles:

The key thing about both of these models is that they fix the incentive problem: subscriptions tie niche publications to their readers in about as direct a way as possible, while a native advertising model is effective because, just like the old days, it ensures that the reader and the customer-to-be-reached by the advertiser are one and the same.

As for broad-based publications, keep in mind what advertisers care about: reaching potential customers wherever they may be, which just so happens to be exactly what broad-based publications should do — be everywhere with their content, wherever their potential readers might be. No company has nailed this point like BuzzFeed: indeed, what makes their advertising agency business model so effective is that their editorial and advertising teams do the exact same thing the exact same way.3

This didn’t happen by accident; to BuzzFeed founder and CEO Jonah Peretti’s credit, BuzzFeed was built from day one to be a business that earned money the old-fashioned way: by being better at what they do than any of their competitors.4 Publications that seek to imitate their success — and their growth — need to do so not simply by making listicles or by focusing on social. Fundamentally, like BuzzFeed, they need to start with their business model: the future of journalism depends on embracing what far too many journalists are proud to ignore.

Discuss this article on the Stratechery Forum (members-only)

The Rationale Behind the Daily Update Podcast, Podcasts and Email, Spotify and the Three Bens