Let’s start with the caveats: no, Tesla did not sell 276,000 Model 3’s in three days;1 that is the number of fully refundable pre-orders that required a deposit of “only” $1,000.2 And yes, Tesla has a history of delivering cars late and with a higher price than expected. Moreover, given the fact that Tesla only delivered just over 50,000 cars last year, no matter how quickly Tesla scales it will almost certainly be years before this first week of reservations is fulfilled, and even then Tesla will only control a fraction of the car market.

With that out of the way, can we marvel at what Tesla and CEO Elon Musk have accomplished? Nearly 300,000 people have willingly parted with $1,000 despite the fact they will not have a chance to purchase a car for years; an astounding 115,000 of them sent in their deposit before they even knew what the car looked like. A friend got in line to make his reservation at 6:45am and there were 123 people in front of him. This is, no matter how you measure it, a phenomenon that is nearly unprecedented; the only possible comparison is Apple and its iPhone.

Long lines and fans committed to ordering new products sight-unseen are not the only things Tesla and Apple have in common: both companies have been doubted for allegedly not understanding Disruption Theory; both, though, are proving that Disruption Theory does not have all the answers, particularly when it comes to consumer markets.

The iPhone and Disruption

Back in 2013 I wrote What Clayton Christensen Got Wrong, specifically about Apple and the iPhone:

Christensen’s theory is based on examples drawn from buying decisions made by businesses, not consumers. The reason this matters is that the theory of low-end disruption presumes:

All three of the assumptions fail in the consumer market, and this, ultimately, is why Christensen’s theory fails as well…

My conclusion was that the iPhone was, contrary to the then-conventional wisdom, not likely to suffer from low-end disruption, and not only has that proven to be correct, Apple has in fact expanded its global marketshare. And now, with the iPhone SE, Apple is expanding the high end to a price point accessible to customers in developing markets who very much want an iPhone but simply don’t have the means to afford top-of-the-line prices.

It’s this latter point — that a high-end approach can drive growth at lower price points — that seems particularly pertinent to the Model 3.

During Thursday’s Model 3 introduction Musk referenced Tesla’s “secret master plan,” which he laid out in a blog post back in 2006. Musk wrote:

The initial product of Tesla Motors is a high performance electric sports car called the Tesla Roadster. However, some readers may not be aware of the fact that our long term plan is to build a wide range of models, including affordably priced family cars…Critical to making that happen is an electric car without compromises, which is why the Tesla Roadster is designed to beat a gasoline sports car like a Porsche or Ferrari in a head to head showdown. Then, over and above that fact, it has twice the energy efficiency of a Prius…

The strategy of Tesla is to enter at the high end of the market, where customers are prepared to pay a premium, and then drive down market as fast as possible to higher unit volume and lower prices with each successive model…The second model will be a sporty four door family car at roughly half the $89k price point of the Tesla Roadster and the third model will be even more affordable.

In keeping with a fast growing technology company, all free cash flow is plowed back into R&D to drive down the costs and bring the follow on products to market as fast as possible. When someone buys the Tesla Roadster sports car, they are actually helping pay for development of the low cost family car.

Leaving aside the fact that the “sporty four door family car” costs $25,000 more than Musk’s promise,3 the strategy seems to have worked: Tesla, with a detour to build the Model X crossover along the way, has moved down the cost curve culminating in the announcement of the affordable Model 3.

A closer look, though, suggests that Musk painted too rosy a picture when it comes to the Master Plan’s funding: while Tesla’s cars have, from 2009 on, been sold at a profit, the company has still lost significant amounts of money every year. The reality is the company’s significant research and development costs have been paid for by issuing stock and incurring debt, not the profits of high-end models.

Given Tesla’s finances, it’s tempting to ask why the company didn’t simply start with the low-end; indeed, researchers at Christensen’s Forum for Growth and Innovation argued last year that a better approach to the electric vehicle market would be exactly that. From a Harvard Business Review article entitled Tesla’s Not as Disruptive as You Might Think:

It [is] clear that Tesla is not a disrupter. It’s a classic “sustaining innovation” — a product that, according to Christensen’s definition, offers incrementally better performance at a higher price…because it’s a sustaining innovation, theory predicts that competitors will emerge. Our analysis concludes that a competitive response won’t happen until Tesla expands outside its current niche of people who prefer electric vehicles to gas-powered cars — but if it expands by creating more variety (such as SUVs) and more-affordable vehicles, competition will be fierce.

Instead the research team suggested the better route for electric vehicles would be “neighborhood electric vehicles”, which are pretty much the exact opposite of a Tesla: the article describes them as “a low-speed vehicle that resembles a souped-up golf cart.”

Don’t feel bad if you haven’t heard of neighborhood electric vehicles: Global Electric Motorcars, featured in the article’s sidebar, have only sold 50,000 vehicles in 17 years, despite the fact they cost around a tenth as much as a Model S. Tesla, meanwhile, sold over 50,000 Model S’s last year alone; its growth rate relative to its competitors was especially impressive. This table about large luxury vehicles in the U.S. is from the company’s February 2016 letter to investors: 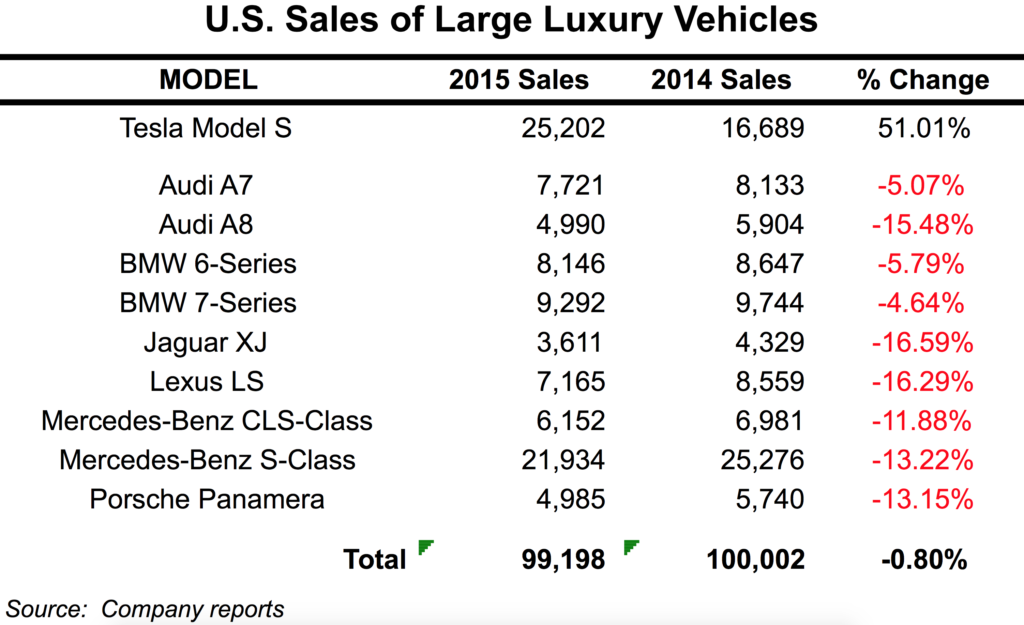 One would think the other car companies in this table would be incentivized to respond, no? Yet Tesla is not being out-competed, and they sure as heck aren’t selling glorified golf carts:

The truth is that the HBS Growth and Innovation Forum team is right: Tesla is not disruptive. Rather, their error was a repeat of the mistake Christensen made with the iPhone; first, they don’t understand why people buy Teslas, and two, they assume that disruption is the only viable strategy to enter a new market.

The Power of Best

When it comes to the iPhone I have argued that Apple’s smartphone was, relative to the phones on the market, Obsoletive: the iPhone effectively reduced the phones that came before it to apps on a general purpose computer, justifying a higher price even as it made cheaper incumbents obsolete.4

This doesn’t quite work for Tesla: at the end of the day a Model S is still doing the same job as a traditional BMW or Mercedes-Benz. It just does it better: a Model S accelerates faster, it has more storage, it has innovative features like limited auto-pilot and a huge touch-screen interface, and you don’t have to stop at the gas station. Most importantly, though, it is a Tesla.

The real payoff of Musk’s “Master Plan” is the fact that Tesla means something: yes, it stands for sustainability and caring for the environment, but more important is that Tesla also means amazing performance and Silicon Valley cool. To be sure, Tesla’s focus on the high end has helped them move down the cost curve, but it was Musk’s insistence on making “An electric car without compromises” that ultimately led to 276,000 people reserving a Model 3, many without even seeing the car: after all, it’s a Tesla.

From Clean Slates to Free Passes

The electric car business has taken the form of an old-fashioned race for a prize…but now it looks pretty clear who the winner will be. And it ain’t Tesla.

General Motors first unveiled the Chevy Bolt as a concept car in January 2015, billing it as a vehicle that would offer 200 miles of range for just $30,000 (after a $7,500 federal tax credit). Barring any unforeseen delays, the first Bolts will roll off the production line at GM’s Orion Assembly facility in Michigan by the end of 2016. As Pam Fletcher, GM’s executive chief engineer for electric vehicles, recently put it to me with a confident grin: “Who wants to be second?”

Good for GM, but I’m afraid the company — and Wired — missed the plot; as the article notes an optimistic goal for the Bolt is 50,000 units a year, and I’d bet the under: at the end of the day the company is still selling a relatively slow and ugly Chevrolet. Brand and reputation matters far more than being “first” to a product category where every model on the market has fallen short of expectations — except for Tesla.

To that end, the significance of electric to Tesla is that the radical rethinking of a car made possible by a new drivetrain gave Tesla the opportunity to make the best car: there was a clean slate. More than that, Tesla’s lack of car-making experience was actually an advantage: the company’s mission, internal incentives, and bottom line were all dependent on getting electric right.

Again the iPhone is a useful comparison: people contend that Microsoft lost mobile to Apple, but the reality is that smartphones required a radical rethinking of the general purpose computer: there was a clean slate. More than that, Microsoft was fundamentally handicapped by the fact Windows was so successful on PCs: the company could never align their mission, incentives, and bottom line like Apple could.

To be sure, what Tesla and Apple have accomplished is not easy, and ongoing success is not guaranteed, particularly at lower price points. I think, though, Tesla, like Apple before them, has more control of their destiny than it may appear. Writing about Apple in an article called Best I said:

As nearly every other consumer industry has shown, as long as there is a clear delineation between the top-of-the-line and everything else, some segment of the user base will pay a premium for the best. That’s the key to Apple’s future: they don’t need completely new products every other year (or half-decade); they just need to keep creating the best stuff in their categories. Easy, right?

It is, in fact, devilishly hard; indeed Apple’s software quality has, in the eyes of many observers, declined the last few years. The company, though, has been synonymous with “best” for so long that they have time to get it right, and millions of new customers who can’t wait to buy their first iPhone; Tesla will likely receive similar grace when and if the Model 3 comes in late and over its promised price. After all, it will still be a Tesla.