This was my favorite slide from yesterday’s Google hardware event: 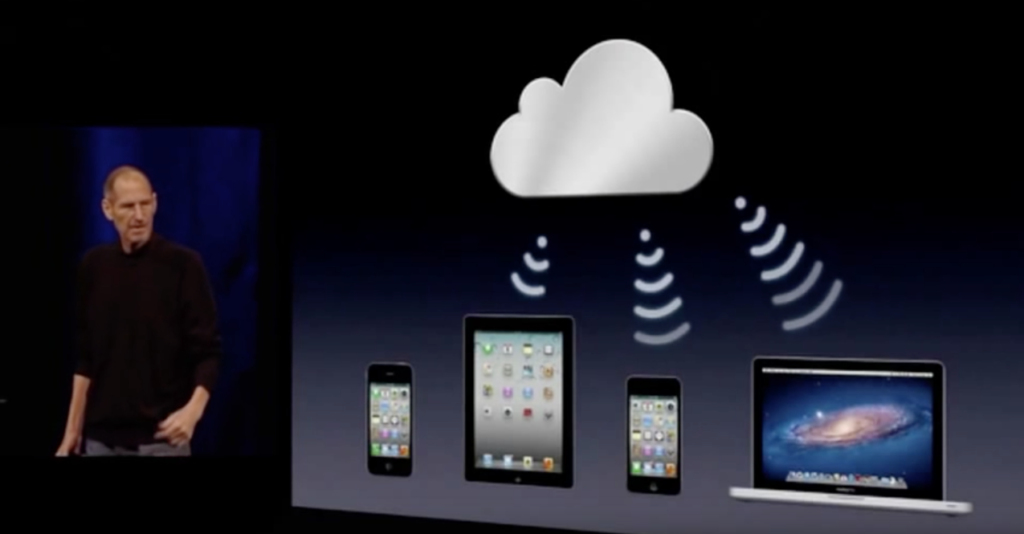 For Google, a cloud on the slide is not necessary: it is the very essence of the company. Hardware, well, perhaps a little over-compensation is in order.

Steve Jobs’, in his last keynote, framed that slide as a new direction for Apple after the company’s brilliant digital hub strategy, introduced ten years prior: 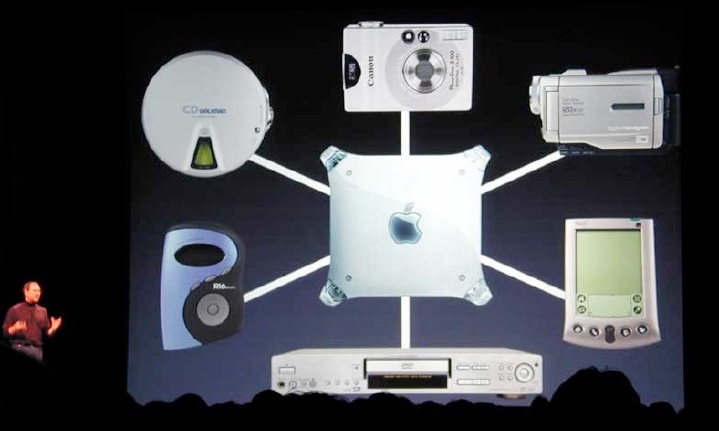 In fact, though, Apple was building Digital Hub 2.0, with the iPhone at the center: 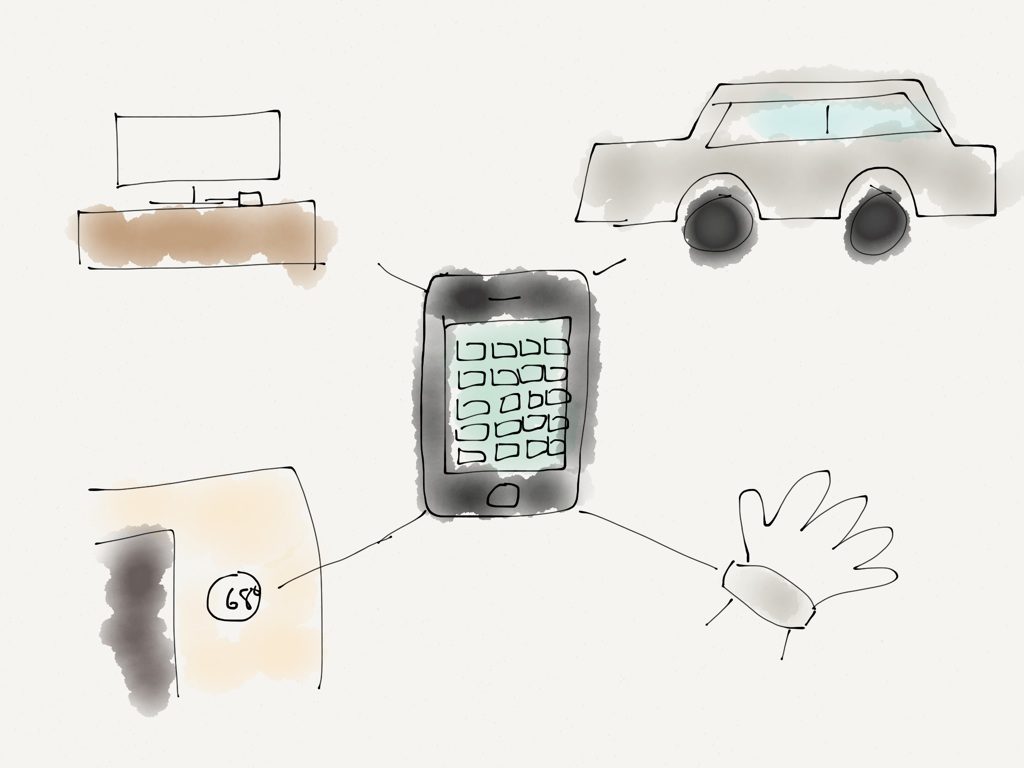 Sure, iCloud kept files in sync (usually), but the iPhone was the juggernaut it was because it hit the perfect sweet spot of company, market, and value chain:

Company: Apple from the very beginning has been premised on the idea of integrating hardware and software, and the iPhone was the ultimate expression of that premise.

Market: The smartphone market was the best market technology has ever seen: not only did everyone need a phone, but in developed countries carriers subsidized top-end models because they drove higher average revenue per subscriber. Moreover, because a phone was something you took with you everywhere, there was far more value placed on non-technical attributes like fit-and-finish and brand.

Value Chain: Apple’s integration delivered sustainable differentiation in the smartphone value chain, forcing every other element, from suppliers to network providers to app makers to modularize themselves around Apple’s integration.

The result was the most successful product ever.

Given that Google is the second most valuable company in the world (after Apple), it is quite clear the company has found a sweet spot of its own. Indeed, Google Search ticks the same boxes as the iPhone:

Company: Google is built around the idea that superior technology is all that matters; that was certainly the case with search, which brilliantly leveraged the connectivity inherent to the web to make itself better; unlike its competitors, the bigger the web became, the better Google itself became.

Market: The truth is that the best technology does not always win; what made Google search the dominant force that it was and remains was the openness of the web. The less friction there was in the traversal of information the more that sheer technological prowess matters.

Value Chain: Google is the king of aggregators because, when information shifted from scarcity to abundance, discovery became the point of leverage, and Google was better at discovery than anyone. That allowed the company to integrate end users and discovery, making search the single best place to advertise for all kinds of industries.

Building truly transformative products requires all three: a company that is the best at serving a market at the point in the value chain where integration can drive sustainable profits.

Last year, after the company’s first ‘Made By Google’ event, I framed the company’s hardware efforts in the context of the search business model. Specifically:

A business, though, is about more than technology, and Google has two significant shortcomings when it comes to assistants in particular. First, as I explained after this year’s Google I/O, the company has a go-to-market gap: assistants are only useful if they are available, which in the case of hundreds of millions of iOS users means downloading and using a separate app (or building the sort of experience that, like Facebook, users will willingly spend extensive amounts of time in).

Secondly, though, Google has a business-model problem: the “I’m Feeling Lucky Button” guaranteed that the search in question would not make Google any money. After all, if a user doesn’t have to choose from search results, said user also doesn’t have the opportunity to click an ad, thus choosing the winner of the competition Google created between its advertisers for user attention. Google Assistant has the exact same problem: where do the ads go?

It seemed at the time that Google planned to use the Google Assistant as a differentiator to drive Pixel sales; a few months later, the company either backed down or admitted to what was the better course of action: making Assistant a part of Android. It remains unclear whether the pursuit of alternatives by Android OEM’s was the cause or result of Assistant’s temporary Pixel-exclusivity.

What seems truer than ever, though, is this:

Google has adopted Alan Kay’s maxim that “People who are really serious about software should make their own hardware.” To that end the company introduced multiple hardware devices, including a new phone, the previously-announced Google Home device, new Chromecasts, and a new VR headset. Needless to say, all make it far easier to use Google services than any 3rd-party OEM does, much less Apple’s iPhone.

Yesterday the company doubled down: there were two new Google Home devices, including a competitor for Amazon’s Echo Dot and Apple’s HomePod, an updated Pixel phone, a new laptop with Google Assistant built-in (including into the optional stylus), headphones, and even a standalone camera.

What was most striking, though, was Google CEO Sundar Pichai’s opening:

We’re excited by the shift from a mobile-first to an AI-first world. It is not just about applying machine learning in our products, but it’s radically re-thinking how computing should work…We’re really excited by this shift, and that’s why we’re here today. We’ve been working on software and hardware together because that’s the best way to drive the shifts in computing forward. But we think we’re in the unique moment in time where we think we can bring the unique combination of AI, and software, and hardware to bring the different perspective to solving problems for users. We’re very confident about our approach here because we’re at the forefront of driving the shifts to AI.

Note that last line: Google’s confidence comes from the Company perspective: artificial intelligence, at least its machine learning manifestation, fits perfectly in Google’s wheelhouse of acting on massive amounts of data. Simply being good at something, though, is not enough: you need the market and value chain fit as well.

Indeed, this is why startups often beat incumbents: incumbents have resource advantages, but everything about their company is focused on a solved problem — the one that propelled them from startup to incumbent in the first place. Startups, on the other hand, have the luxury of conforming every aspect of their company around the problem to be solved, perfectly serving the market and capturing the point of integration/differentiation in the value chain.

So how does Google fare? Start with value chains: I actually found the breadth of Google products to be impressive, both proof that my suspicions about hardware being the best way to monetize Google software was correct, and evidence of a real commitment on Google’s part to realizing that opportunity. The idea is straight from Apple’s playbook: monetize software by selling integrated hardware at a healthy margin (products competing directly with Amazon excepted).

The breadth is also necessary: for Assistant to reach its potential it is necessary that it be available everywhere, and everywhere happens to hit on both Apple and Amazon’s achilles heel — Apple, the devotion to the phone as the center of everything, and Amazon’s lack of a phone platform of its own.

The question, though, is the market, and this is where I appreciate Pichai’s perhaps inadvertent honesty: Google is excited about AI because Google is good at AI; the success of AI as a differentiator, though, depends on whether or not there is a market for it. That remain to be seen.

That said, perhaps the most surprising news from yesterday came from an interview Pichai did with The Verge’s Dieter Bohn:

As ambitious as Google is with its own hardware, it’s still a tiny drop in the bucket compared to the company’s online business. Pichai won’t say when we can expect to see hardware sales become a big, broken-out part of its financial calls, outside of saying it’ll definitely happen in the next five years.

That’s no small thing: I have hammered the company repeatedly for its failure to break out different business units, particularly YouTube, so a pledge to disclose hardware sales is significant. It also hints at a deeper commitment: specifically, I wouldn’t be surprised if Google announced dedicated retail stores sooner rather than later. AI may be the future, and Google may be the best at it, but sometimes markets need to be made, not simply seized.