Even though Apple’s developer conference is still a few weeks away, I think it’s safe to say that the demo of Google Duplex at yesterday’s Google I/O keynote will go down as the most impressive of the tech conference season. If you haven’t seen it, it is a must-watch:

Once I picked my jaw up off the floor, though, what struck me about Google CEO Sundar Pichai’s presentation was how he opened the segment:

Our vision for our assistant is to help you get things done.

And how he closed it:

A common theme across all this is we are working hard to give users back time. We’ve always been obsessed about that at Google. Search is obsessed about getting users to answers quickly and giving them what they want.

In Google’s view, computers help you get things done — and save you time — by doing things for you. Duplex was the most impressive example — a computer talking on the phone for you — but the general concept applied to many of Google’s other demonstrations, particularly those predicated on AI: Google Photos will not only sort and tag your photos, but now propose specific edits; Google News will find your news for you, and Maps will find you new restaurants and shops in your neighborhood. And, appropriately enough, the keynote closed with a presentation from Waymo, which will drive you.

Rewind a week, and there was a specific section in Mark Zuckerberg’s keynote at the Facebook F8 conference that stuck out to me:

I believe that we need to design technology to help bring people closer together. And I believe that that’s not going to happen on its own. So to do that, part of the solution, just part of it, is that one day more of our technology is going to need to focus on people and our relationships. Now there’s no guarantee that we get this right. This is hard stuff. We will make mistakes and they will have consequences and we will need to fix them. But what I can guarantee is that if we don’t work on this the world isn’t moving in this direction by itself.

Zuckerberg, as so often seems to be the case with Facebook, comes across as a somewhat more fervent and definitely more creepy version of Google: not only does Facebook want to do things for you, it wants to do things its chief executive explicitly says would not be done otherwise. The Messianic fervor that seems to have overtaken Zuckerberg in the last year, though, simply means that Facebook has adopted a more extreme version of the same philosophy that guides Google: computers doing things for people.

The Microsoft and Apple Philosophy

Earlier this week, while delivering Microsoft’s Build conference keynote, CEO Satya Nadella struck a very different tone; after describing how computing was becoming invisible, because it is everywhere, Nadella said:

In fact Hans Jonas was a philosopher who worked in the 50s, 60s, and he wrote a paper on technology and responsibility…he talks about act so that the effects of your action are compatible with permanence or genuine life. That’s something that we need to reflect on, because he was talking about the power of technology being such that it far outstrips our ability to completely control it, especially its impact even on future generations. And so we need to develop a set of principles that guide the choices we make because the choices we make is what’s going to define the future…

This opportunity and responsibility is what grounds us in our mission to empower every person and every organization on the planet to achieve more. We’re focused on building technology so that we can empower others to build more technology. We’ve aligned our mission, the products we build, our business model, so that your success is what leads to our success. There’s got to be complete alignment.

This is technology’s second philosophy, and it is orthogonal to the other: the expectation is not that the computer does your work for you, but rather that the computer enables you to do your work better and more efficiently. And, with this philosophy, comes a different take on responsibility. Pichai, in the opening of Google’s keynote, acknowledged that “we feel a deep sense of responsibility to get this right”, but inherent in that statement is the centrality of Google generally and the direct culpability of its managers. Nadella, on the other hand, insists that responsibility lies with the tech industry collectively, and all of us who seek to leverage it individually.

The Bicycle of the Mind

This second philosophy, that computers are an aid to humans, not their replacement, is the older of the two; its greatest proponent — prophet, if you will — was Microsoft’s greatest rival, and his analogy of choice was, coincidentally enough, about transportation as well. Not a car, but a bicycle:

Steve Jobs was exceptionally fond of this analogy: there are multiple clips of him making the point in mostly the same way; I usually link to this one because by the time this video was recorded1 Jobs had his delivery perfectly honed.

Interestingly, though, the earliest known clip of Jobs telling this story, from 1980, doesn’t include the famous phrase “Bicycle of the Mind”; it’s worth watching, though, all the same:

The best analogy I’ve ever heard is Scientific American, I think it was, did a study in the early 70s on the efficiency of locomotion, and what they did was for all different species of things in the planet, birds and cats and dogs and fish and goats and stuff, they measured how much energy does it take for a goat to get from here to there. Kilocalories per kilometer or something, I don’t know what they measured. And they ranked them, they published the list, and the Condor won. The Condor took the least amount of energy to get from here to there. Man was didn’t do so well, came in with a rather unimpressive showing about a third of the way down the list.

But fortunately someone at Scientific American was insightful enough to test a man with a bicycle, and man with a bicycle won. Twice as good as the Condor, all the way off the list. And what it showed was that man is a toolmaker, has the ability to make a tool to amplify an inherent ability that he has. And that’s exactly what we’re doing here.

This is precisely what Nadella was driving at: “to empower every person and every organization on the planet to achieve more” is to “amplify an inherent ability” those people and organizations have; the goal is not to do things for them, but to enable them to do things never before possible. And, I would hasten to add, Apple remains very much on the same side of this philosophical divide.

The Chicken and Egg Question

There is certainly an argument to be made that these two philosophies arise out of their historical context; it is no accident that Apple and Microsoft, the two “bicycle of the mind” companies, were founded only a year apart, and for decades had broadly similar business models: sure, Microsoft licensed software, while Apple sold software-differentiated hardware, but both were and are at their core personal computer companies and, by extension, platforms. 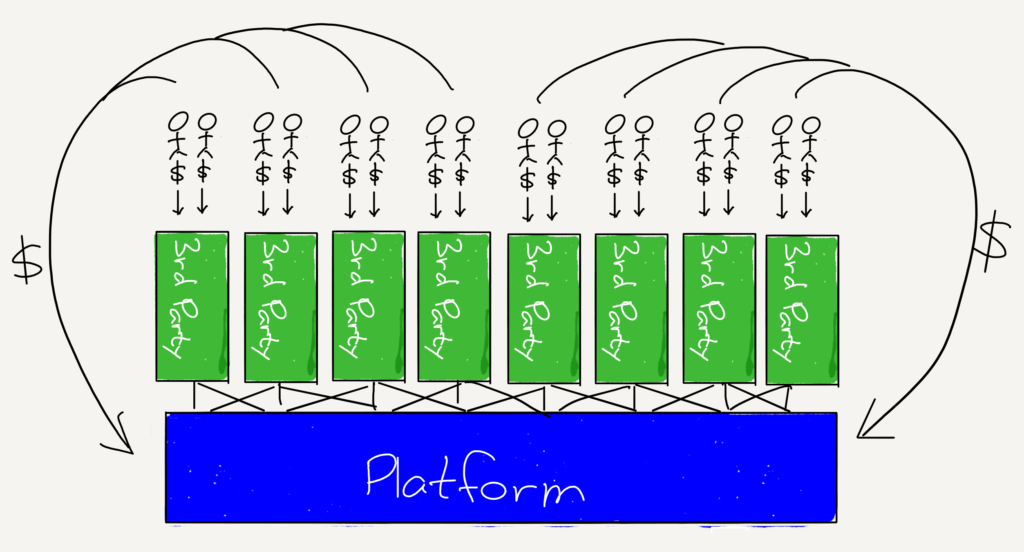 Google and Facebook, on the other hand, are products of the Internet, and the Internet leads not to platforms but to aggregators. While platforms need 3rd parties to make them useful and build their moat through the creation of ecosystems, aggregators attract end users by virtue of their inherent usefulness and, over time, leave suppliers no choice but to follow the aggregators’ dictates if they wish to reach end users. 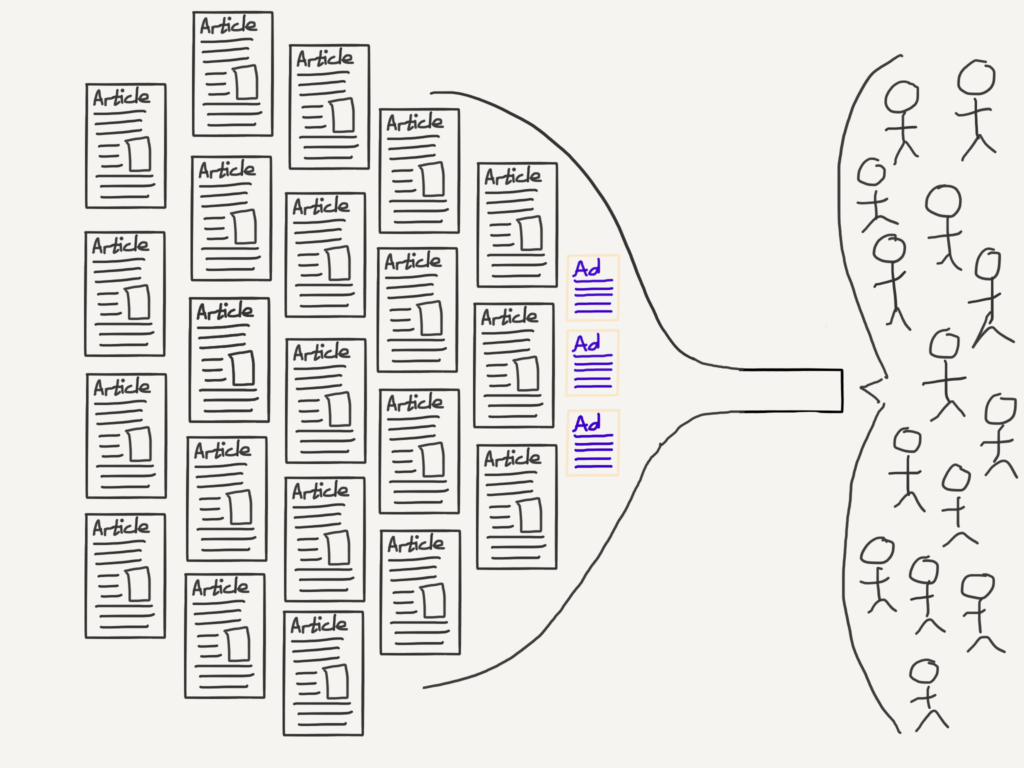 The business model follows from these fundamental differences: a platform provider has no room for ads, because the primary function of a platform is provide a stage for the applications that users actually need to shine. Aggregators, on the other hand, particularly Google and Facebook, deal in information, and ads are simply another type of information.2 Moreover, because the critical point of differentiation for aggregators is the number of users on their platform, advertising is the only possible business model; there is no more important feature when it comes to widespread adoption than being “free.”

Still, that doesn’t make the two philosophies any less real: Google and Facebook have always been predicated on doing things for the user, just as Microsoft and Apple have been built on enabling users and developers to make things completely unforeseen.

That there are two philosophies does not necessarily mean that one is right and one is wrong: the reality is we need both. Some problems are best solved by human ingenuity, enabled by the likes of Microsoft and Apple; others by collective action. That, though, gets at why Google and Facebook are fundamentally more dangerous: collective action is traditionally the domain of governments, the best form of which is bounded by the popular will. Google and Facebook, on the other hand, are accountable to no one. Both deserve all of the recent scrutiny they have attracted, and arguably deserve more.

That scrutiny, though, and whatever regulations that result, must keep in mind this philosophical divide: platforms that create new possibilities — and not just Apple and Microsoft! — are the single most important economic force when it comes to countering the oncoming wave of computers doing people’s jobs, and lazily written regulation that targets aggregators but constricts platforms will inevitably do more harm than good.

The truth is that the Divine Discontent that I wrote about last week is not only an antidote to low-end disruption, but also a reason for optimism: companies like Apple and Amazon can, as I noted, win in the long run by offering a superior user experience, but more importantly, the dividend of discontent is a greenfield of opportunities to build new businesses and new jobs alleviating that discontent. For that we need platforms on which to build those businesses, and yes, we will need artificial intelligence to do things for us so we have the time.