It’s hard to remember now, but the dominant Apple narrative in 2013, after a five-year iPhone run that saw the company’s stock price increase around 700%, was that the company was at risk of low-end disruption from Android and high-end saturation now that smartphone technology was “good enough”.

This was, for me, rather fortuitous: Stratechery launched in the middle of the Apple-needs-a-cheap-iPhone era, providing plenty of fodder not only for articles defending Apple’s competitive position,2 but also multiple articles speculating on what the iPhone 5C would cost and how it would be positioned.

For the record, I guessed wrong, and I knew I was wrong Two Minutes, Fifty-six Seconds into the keynote.

It was at two minutes, fifty-six seconds that Tim Cook said there would be a video – a video! – about the iTunes Festival.

And it was awesome.

In case you didn’t watch the whole video (and you really should – it’s only a couple of minutes; due to a copyright claim I had to embed Apple’s full-length keynote), this clip of the ending captures why it matters:

This was Apple, standing up and saying to all the pundits, to all the analysts, to everyone demanding a low price iPhone:

No, we will NOT compete on price, we will offer something our competitors can’t match.

No, we are NOT selling a phone, we are selling an experience.

No, we will NOT be cheap, but we will be cool.

No, you in the tech press and on Wall Street do NOT understand Apple, but we believe that normal people love us, love our products, and will continue to buy, start to buy, or aspire to buy.

Oh, and Samsung? Damn straight people line up for us. 20 million for a concert. “It’s like a product launch.”

This attitude and emphasis on higher-order differentiation — the experience of using an iPhone — dominated the entire keynote and the presentation of features, with particularly emphasis throughout on the interplay between software and hardware.

In fact, that understated Apple’s position in the market: as I discussed last year the iPhone 5C — which in retrospect, was really just an iPhone 5 replacement in Apple’s trickle-down approach to serving more price-sensitive customers — was a bit of a failure: Apple customers only wanted the best iPhone, and those that couldn’t afford the current flagship preferred a former flagship, not one that was “unapologetically plastic”.

Thus the first lesson: Apple wouldn’t go down-market, nor did its customers want it to.

Last year, meanwhile, was in many respects the opposite of the iPhone 5S and 5C launch, at least from a framing perspective. The iPhone 8 was the next in line after the iPhone 7 and all of the iPhones before it; it was the iPhone X that was presented as being out-of-band — “one more thing”, to use the company’s famous phrase. The iPhone X was the “future of the smartphone”, with a $999 price tag to match.

A year on, it is quite clear that the future is very much here. CEO Tim Cook bragged during yesterday’s keynote that the iPhone X was the best-selling phone in the world, something that was readily apparent in Apple’s financial results. iPhone revenue was again up-and-to-the-right, not because Apple was selling more iPhones — unit growth was flat — but because the iPhone X grew ASP so dramatically:

This was the second lesson: for Apple’s best customers, price was no object.

To be clear, the overall strategy and pricing of the iPhones XS and XR were planned out two to three years ago; that’s how long product cycles take when it comes to high-end smartphones. Perhaps that is why the lessons of the iPhone 5C seem so readily apparent in the iPhone XR in particular.

First off, while the XR does not have stainless steel edges like the iPhones X or XS, it is a far cry from plastic: the back is glass, like the high end phones, and the aluminum sides not only look premium but will be hidden when the phone is in a case, as most will be. What really matters is that the front looks the same, with that notch: this looks like a high-end iPhone, with all of the status that implies.

Second, the iPhone XR is big — bigger than the XS (and smaller than the XS Max, and yes, that is its real name). This matters less for 2018 and more for 2020 and beyond: presuming Apple follows its trickle-down strategy for serving more price-sensitive markets, that means in two years its lowest-end offering will not be a small phone that the vast majority of the market rejected years ago, particularly customers for whom their phone is their only computing device, but one that is far more attractive and useful for far more people.

Third, that 2020 iPhone XR is going to be remarkably well-specced. Indeed, probably the biggest surprise from these announcements (well, other than the name “XS Max”) is just how good of a smartphone the XR is.

There really is no other way to put it: the XR is a fantastic phone, one that would be more than sufficient to maintain Apple’s position atop the industry were it the flagship. And yet, in the context of Apple’s strategy, it is best thought of as being quite literally ahead of its time.

This is where the iPhone X lesson matters. Last year’s iPhone 8 was a great phone too, with the same A11 processor as the iPhone X, a high quality LCD screen like the iPhone XR, and a premium aluminum-and-glass case (and 3D Touch!). It also had Touch ID and a more familiar interface, both arguably advantages in their own right, and the Plus size that so many people preferred.

It didn’t matter: Apple’s best customers, not just those who buy an iPhone every year, but also those whose only two alternatives are “my current once-flagship iPhone” or “the new flagship iPhone” are motivated first-and-foremost by having the best; price is a secondary concern. That is why the iPhone X was the best-selling smartphone, and the iPhone 8 — which launched two months before the iPhone X — a footnote.

To be sure, the iPhone X had the advantage of being something truly new, not just the hardware but also the accompanying software. It was the sort of phone an Apple fan might buy a year sooner than they had planned, or that someone more price sensitive might choose over a cheaper option. The XS will face headwinds in both regards: it is faster than the iPhone X, has a better camera, comes in gold — it’s an S-model, in other words — but it’s hard to see it pulling forward upgrades; it’s more likely natural XS buyers were pulled forward by the X. And, as noted above, the XR is a much more attractive alternative to the X than the 8 was to the X; most Apple fans may want the best, but some just want a deal, and the XR is a great one.

Apple should be fine though: overall unit sales may fall slightly, but the $1,099 XS Max will push the average selling price even higher. Note, too, that the XR is only available starting at $749; the longstanding $650 iPhone price point was bumped up to $699 last year, and is now a distant memory.3 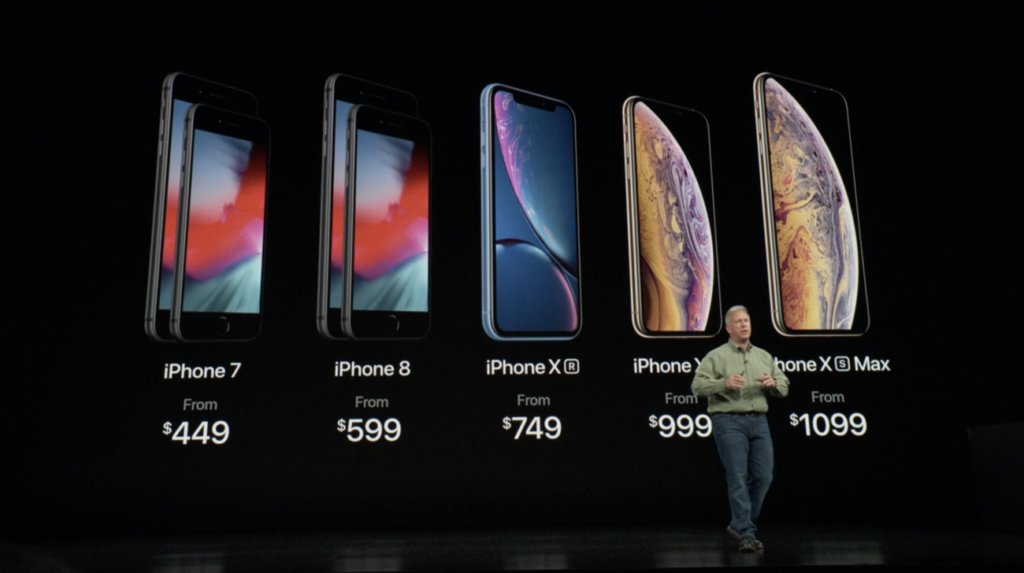 To put it another way, to the extent the XR cannibalizes the XS, it cannibalizes them with an average selling price equal to Apple’s top-of-the-line iPhone from two years ago; the iPhone 8 is $50 higher than the former $550 price point as well.

The strategy is, dare I say, bordering on over-confidence. Apple is raising prices on its best product even as that product’s relative differentiation from the company’s next best model is the smallest it has ever been.

Here, though, I thought the keynote’s “Mission: Impossible”-themed opening really hit the mark: the reason why franchises rule Hollywood is their dependability. Sure, they cost a fortune to make and to market, but they are known quantities that sell all over the world — $735 million-to-date for the latest Tom Cruise thriller, to take a pertinent example.

That is the iPhone: it is a franchise, the closest thing to a hardware annuity stream tech has ever seen. Some people buy an iPhone every year; some are on a two-year cycle; others wait for screens to crack, batteries to die, or apps to slow. Nearly all, though, buy another iPhone, making the purpose of yesterday’s keynote less an exercise in selling a device and more a matter of informing self-selected segments which device they will ultimately buy, and for what price.