First off, I mislabeled a few “Tocks” as “Ticks” in the table in yesterday’s Daily Update (the node sizes were right, though); like Apple, I guess I didn’t have patience for Intel’s delays.

Secondly, I do plan on taking the next couple of days off of Stratechery as planned, and be back next week with analysis of the antitrust hearing; one interesting dynamic is that all four of the companies represented in the hearing are announcing earnings on Thursday. Expect a lot of headlines contrasting those two events.

Congress brought the country’s big banks to heel after the financial crisis, cowed a tobacco industry for imperiling public health and forced airline leaders to atone for years of treating their passengers poorly. Now, lawmakers are set to turn their attention to technology, channeling long-simmering frustrations with Amazon, Apple, Facebook and Google into a high-profile hearing some Democrats and Republicans hope will usher in sweeping changes throughout Silicon Valley.

This is a remarkable bit of framing for a (checks link) news article. It is taken as a given that the big tech companies are akin to big banks after the financial crisis, the tobacco industry, and airlines — no wonder there are “long-simmering frustrations”! People must hate Apple, Google, Amazon, and Facebook!

Needless to say, this doesn’t match reality; every year The Verge conducts a tech survey and the results speak for themselves: 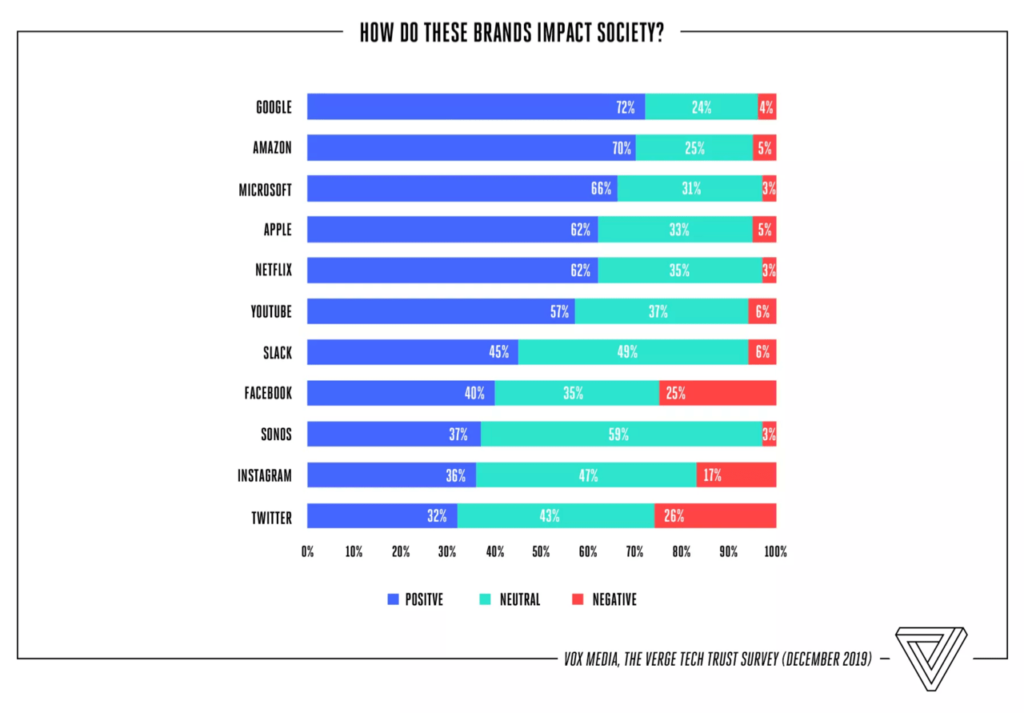 Even Facebook, after four years of being blamed or scapegoated for both the publishing industry’s financial struggles and the election of Donald Trump — choose your own adventure! — has only managed a 29% unfavorability rating:

Moreover, this survey was done in December, well before the tech industry proved itself to be the only institution in the United States that actually performed well during the coronavirus crisis.

The Role of Congress

The real problem with this framing by the Washington Post — which I chose not to pick on one article or one publication, but rather because I do think it is representative of a lot of the discourse about tech — is that it misses both the point of this hearing, and of the real role that Congress needs to play when it comes to technology.

Start with the committee, specifically, the House antitrust subcommittee. This is, or at least should be, an article about competition, not privacy or bias or election interference; that is not to say that those things aren’t impacted by competition, because they are, but generally speaking the idea is that more competition should address harms — and that increased regulation, in contrast, reduces competition. This tradeoff ought to be at the forefront of Congress’s thinking as they consider tech company regulation.

At the same time, this is the first of three reasons as to why I am glad this hearing is taking place. Figuring out whether and to what extent to regulate technology is going to require negotiating a huge number of trade-offs between things like privacy, competition, national security, etc. Only Congress is properly positioned to make those trade-offs.

Second, as I have been writing for years now, our current antitrust laws, created as they were for the analog world where market power came from controlling supply, are simply unsuitable for the digital world where market power comes from controlling demand. The European Commission’s struggle to regulate Google is a perfect example; from a Daily Update last December:

A common point made by regulators [in Brussels] is that it doesn’t matter that end users could theoretically use a different general purpose search engine, or vertical search engine, or even go to a website directly. The reality is that the vast majority of people use Google, therefore Google is a monopoly and should be held liable for the harms I described yesterday: vertical foreclosure, rent-seeking, tying, self-dealing, etc.

The problem, though, is that the only possible outcome in this sort of environment, where Google’s monopoly is a product of user choice and not structural factors, is exactly what everyone is so bummed out about: Google pays a big fine, and nothing changes. After all, if there are no structural problems, what structural remedies are available? It sometimes seems the only possible solution is to start regulating product design: compel Google to serve ten blue links forever. It’s very difficult, though, to see how that is in any way good for end users.

This gets at why the Aggregator/Platform distinction is so important. If regulators want to not only be effective but also actually improve consumer outcomes it actually does matter how tech companies gain and keep market power; rules, contracts, and APIs deserve scrutiny (which is why I think the European Commission is right about Android, for example), but product improvements where competition is yes, only a click away, not so much, in part because remedies probably aren’t going to work anyways.

This, to be clear, does not mean one should throw one’s hands up and declare that nothing can be done; the exact opposite, in fact: it is Congress that needs to take the lead and pass new laws, as opposed to relying on the FTC or the courts. I concluded in A Framework for Regulating Competition on the Internet:

Ideally, there would be stricter adherence to better rules, instead of finger-crossing that Brussels gets it right. That, though, likely requires new laws. Indeed, while that seems like a slog, it should, in my estimation, be the focus of those interested in a future where we direct tech’s innovation towards making a larger pie for everyone, as opposed to cutting off slices because it makes us feel better, even if only temporarily.

This is point two: effective tech regulation requires new laws, not the haphazard application of old ones, so it is good that this hearing is happening in Congress.

The final point goes back to the opening: tech is popular, has proven to be indispensable over the last six months in particular, and is a critical national security concern. To that end, the decision about how to regulate the industry should absolutely be made in the most democratic of our institutions, not the executive branch, not the courts, not the press, not Twitter, and not Silicon Valley. All of those have a role to play, and opinions to express, but it is time for us collectively, via our representatives, to decide what role we wish tech to play, and while it is tempting to dismiss this hearing as a PR stunt, I for one am happy it is happening, and hope for more.

I in some respects wrote a primer for this hearing in June 2019 entitled Tech and Antitrust. From the introduction:

I should state an obligatory caveat: I am not a lawyer or economist, which is relevant given that U.S. antitrust cases are adjudicated in court and largely driven by expert testimony. That reality, though, only underscores the point: any case against these four companies (with possibly one exception, which I will get to momentarily), will be extremely difficult to win. To explain why, it is worth examining all four companies with regards to:

In addition, for comparison’s sake, I will evaluate late 1990’s Microsoft, the last major tech antitrust case in the United States, along the same dimensions.

That article was about potential antitrust investigations by the Justice Department and the FTC; to that end, I was primarily focused on the laws as they are, not, as I discussed in the last section, the fact that we really need new laws.

One of the takeaways from that article is the fact that the issues raised by each of these four companies are very different (and yes, as I noted last week, Microsoft should be here). To that end, I thought it would be interesting to think about what questions I would ask each of the CEOs were I on the committee — and to be clear, not all of these questions are being antagonistic (to take one example, I actually believe that Apple is justified in not allowing side-loading); I do think they deserve greater scrutiny though. In order of market cap:

The fact that Apple and Google have more questions than Amazon and Facebook is not an accident: as I detailed in that article they have much more significant antitrust issues. It will be interesting to see if that fact is recognized by the committee. I am also interested to what extent these CEOs address each other; if any one CEO does make statements about another company, I would bet on Tim Cook attempting to raise questions about privacy and data collection, and thus focus more attention on Google and Facebook. Remember, though, this is the antitrust subcommittee — I hope committee members stay focused on competition issues.

Finally, if any of you wish to send this list of questions to your Congressperson, please feel free!