Steve Jobs stepped onstage 10 years ago today to introduce the world to the iPad. It was, by his own admission, a third category of device that sits somewhere between a smartphone and a laptop. Jobs unveiled the iPad just days after the annual Consumer Electronics Show ended in Las Vegas and at a time when netbooks were dominating personal computing sales…

Apple had an answer to the netbook: a 9.7-inch tablet that allowed you to hold the internet in your hands…Apple was also looking to create a third category of device that was better at certain tasks than a laptop or smartphone. The iPad was designed to be better at web browsing, email, photos, video, music, games, and ebooks. “If there’s going to be a third category of device it’s going to have to be better at these kinds of tasks than a laptop or a smartphone, otherwise it has no reason for being,” said Jobs.

Stratechery wasn’t my first (or second) blog; back in 2010 I had a Tumblr and I imported some of the posts to Stratechery, including this piece that I wrote when the iPad was announced:

What the iPad does is give Apple a product that offers a superior experience in every dimension of the mobile experience, namely, content creation, content consumption and mobility. 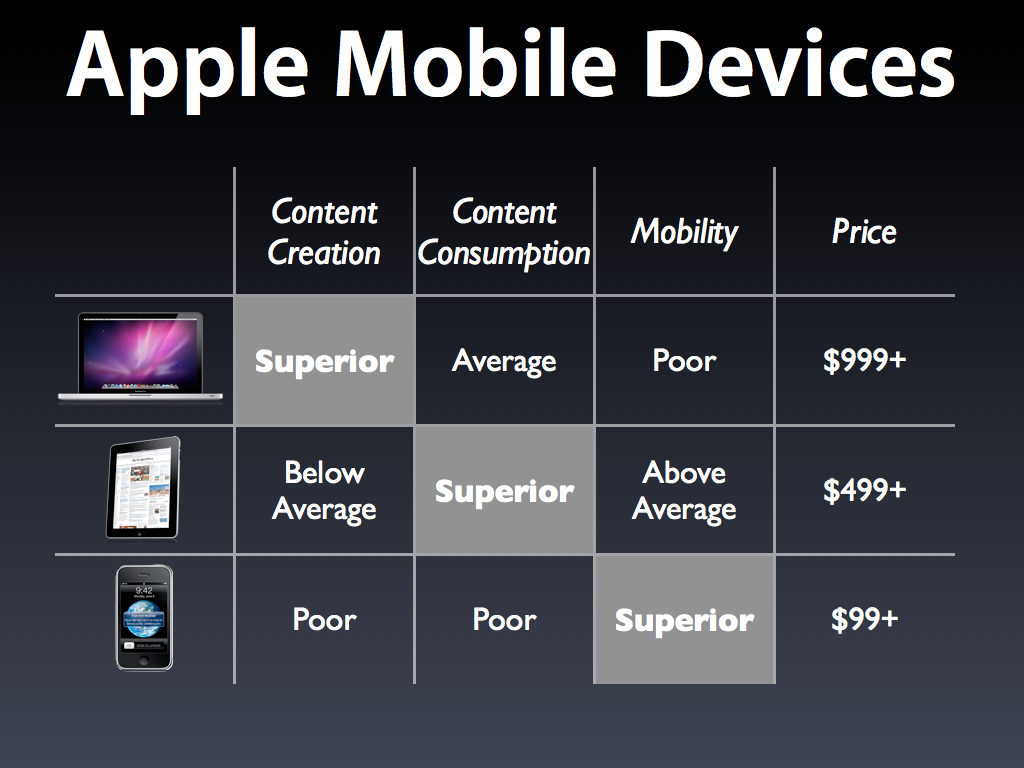 The reason this matters is that the vast majority of users are primarily content consumers. These are the people buying netbooks as their primary computers, or simply avoiding computers as much as possible. They simply want to go on Facebook, check their email, watch YouTube, and at most, upload pictures. Apple’s value proposition to these customers is: The iPad is a superior content consumption experience with sufficient creation capabilities to meet your needs. That is why iWork figured so prominently into the Keynote — it was reassurance that the iPad can pass as your only computer (more on iWork in just a moment).

The post holds up pretty well, if I might say so myself, but it is where it is wrong that is the most interesting.

John Gruber is disappointed in the current state of the iPad:

Ten years later, though, I don’t think the iPad has come close to living up to its potential. By the time the Mac turned 10, it had redefined multiple industries. In 1984 almost no graphic designers or illustrators were using computers for work. By 1994 almost all graphic designers and illustrators were using computers for work. The Mac was a revolution. The iPhone was a revolution. The iPad has been a spectacular success, and to tens of millions it is a beloved part of their daily lives, but it has, to date, fallen short of revolutionary…

Software is where the iPad has gotten lost. iPadOS’s “multitasking” model is far more capable than the iPhone’s, yes, but somehow Apple has painted it into a corner in which it is far less consistent and coherent than the Mac’s, while also being far less capable. iPad multitasking: more complex, less powerful. That’s quite a combination.

I could not agree more with Gruber’s critique. In my opinion, multi-tasking on the iPad is an absolute mess, and it has ruined the entire interface; I actively dislike using the iPad now, and use it exclusively to watch video and make the drawings for Stratechery. Its saving grace is that it is hard to discover.

What is fascinating — and, in my opinion, tragic, in both the literal and literary sense — is how the iPad arrived in its current state. That initial announcement featured Jobs reclining on a couch — it wasn’t very difficult to come up with the “content consumption” angle! Still, you could see the potential for something more. I wrote at the end of that piece:

It’s the long-term picture that is particularly fascinating, and gets back to my contention at the beginning of this post. For while the laptop has all but reached it’s potential — the consumption experience will never improve beyond what it is now — the creation experience on the iPad will only get better with time. In fact, I believe the iPad will be looked back upon as the pioneer of what will become the default way of interacting with computers just like the Macintosh.

Go back and watch the Keynote again, especially the iWork demonstration that begins 57 minutes in. The iPad doesn’t just let you create documents. It lets you create documents in a way that is simply impossible on a normal computer. It is so much more natural, so much more intuitive, that users accustomed to a keyboard-and-mouse will adapt quickly, and more importantly, users accustomed to multitouch will never understand the attachment to a mouse. I truly believe my two year-old daughter, who has already taught herself to use my iPhone, will never seriously use a mouse.

For the record, my now 12 year-old daughter still doesn’t use a mouse, but that is because she has a laptop and uses a touchpad. That was a clear miss by me. A year later, though, when Steve Jobs, in his second-to-last keynote, announced the iPad 2, the future I envisioned looked like it was right on track. The most amazing part of the launch was GarageBand:

This is the entire demo, but the most important part is Steve Jobs reaction to the demo — jump to 12:30 if you don’t have time or inclination to watch the whole thing:

Jobs look of wonderment says more than his words:

I’m blown away with this stuff. Playing your own instruments, or using the smart instruments, anyone can make music now, in something that is this thick and weights 1.3 pounds. It’s unbelievable…this is no toy. This is something you can use for real work.

GarageBand, even more than iWork the year before, was the sort of app that was only possible on an iPad. Sure, it shared a name with its Mac counterpart, but the magic came from the fact that it had little else in common.

And then Jobs died, and I’ve never been able to shake the sense that this particular vision of the iPad died with him.

There was one final part of that GarageBand introduction that, in retrospect, was an inauspicious sign for the future:

It’s tempting to dwell on the Jobs point — I really do think the iPad is the product that misses him the most — but the truth is that the long-term sustainable source of innovation on the iPad should have come from 3rd-party developers. Look at Gruber’s example for the Mac of graphic designers and illustrators: while MacPaint showed what was possible, the revolution was led by software from Aldus (PageMaker), Quark (QuarkXPress), and Adobe (Illustrator, Photoshop, Acrobat). By the time the Mac turned 10, Apple was a $2 billion company, while Adobe was worth $1 billion.

There are, needless to say, no companies built on the iPad that are worth anything approaching $1 billion in 2020 dollars, much less in 1994 dollars, even as the total addressable market has exploded, and one big reason is that $4.99 price point. Apple set the standard that highly complex, innovative software that was only possible on the iPad could only ever earn 5 bucks from a customer forever (updates, of course, were free).

This remains one of Apple’s biggest mistakes; in 2015, when Apple first released the iPad Pro, I wrote in From Products to Platforms

When it comes to the iPad Apple’s product development hammer is not enough. Cook described the iPad as “A simple multi-touch piece of glass that instantly transforms into virtually anything that you want it to be”; the transformation of glass is what happens when you open an app. One moment your iPad is a music studio, the next a canvas, the next a spreadsheet, the next a game. The vast majority of these apps, though, are made by 3rd-party developers, which means, by extension, 3rd-party developers are even more important to the success of the iPad than Apple is: Apple provides the glass, developers provide the experience.

That, then, means that Cook’s conclusion that Apple could best improve the iPad by making a new product isn’t quite right: Apple could best improve the iPad by making it a better platform for developers. Specifically, being a great platform for developers is about more than having a well-developed SDK, or an App Store: what is most important is ensuring that said developers have access to sustainable business models that justify building the sort of complicated apps that transform the iPad’s glass into something indispensable.

That simply isn’t the case on iOS. Note carefully the apps that succeed on the iPhone in particular: either the apps are ad-supported (including the social networks that dominate usage) or they are a specific type of game that utilizes in-app purchasing to sell consumables to a relatively small number of digital whales. Neither type of app is appreciably better on an iPad than on an iPhone; given the former’s inferior portability they are in fact worse.

A very small number of apps are better on the iPad though: Paper, the app used to create the illustrations on this blog, is a brilliantly conceived digital whiteboard that unfortunately makes no money; its maker, FiftyThree, derives the majority of its income from selling a physical stylus called the Pencil (now eclipsed in both name and function by Apple’s new stylus). Apple’s apps like Garageband and iMovie are spectacular, but neither has the burden of making money.

The situation has improved slightly since then, primarily with the addition of subscription pricing for apps. Still, that is far inferior from a customer perspective to the previous “Pay for Version 2” model that sustained developers on the Mac for decades; we never did get upgrade pricing or time-limited trial functionality for regular paid apps.

Instead, as Apple is so wont to do, it tried to fix the problem itself, by making the iPad into an inferior Mac. Thus the multi-tasking disaster Gruber decries, which not only is hard-to-use for consumers, but also dramatically ups the difficulty for developers, making the chances of earning a positive return-on-investment for an iPad app even more remote. Indeed, the top two developers making in-depth iPad apps are Microsoft and Adobe, in service to their own subscription models; the tragedy of the iPad is that their successors were never given the space to be born, which ultimately has limited the iPad from truly succeeding the Mac.

To be fair, would that we all could “fail” like the iPad; it was a $21 billion business last fiscal year, nearly as much as the Mac’s $26 billion.1 That, though, is why I did not call it a failure: the tragedy of the iPad is not that it flopped, it is that it never did, and likely never will, reach that potential so clearly seen ten years ago.