I appeared on Patrick O’Shaughnessy’s podcast Invest Like the Best; recorded early last week, in what feels like a month ago, it covers a huge number of Stratechery topics, including a few things I haven’t written about in years. You can listen to the podcast or read a transcript here.

First off, if you haven’t read yesterday’s Weekly Article, Dust in the Light, please do so; it provides important context for the following.

In short, as the rubber increasingly hits the road as far as content moderation goes, the more I find myself on the “everything goes” side of the fence. I am very aware of the implications of this position, and all of the potential downsides entailed in it, but for today, let’s stick with the question at hand: Trump tweets.

I believe that Facebook is doing the right thing by leaving Trump’s posts up, and Twitter is doing the wrong thing by either attaching fact-check labels or obscuring them behind a warning label. Let me start with the most banal reasons, before moving to the more profound.

First, interfering with the public utterances of the President of the United States is bad for the tech industry broadly and bad for social networks specifically; we saw exactly why last week with Trump’s executive order. Of course this probably doesn’t bother Twitter: they know that Facebook will bear the brunt of any regulation that survives judicial scrutiny, and in the meantime Twitter gets to bask in the praise of its most fervent userbase. It is Facebook, which is far more widely used, that has to actually care about the views of its userbase.

Second, deciding what should or should not be fact-checked is a logistical nightmare. As I noted last week, Trump’s response to Twitter’s fact-checking should — if Twitter were truly focused on the truth — itself be fact-checked. Of course, Twitter CEO Jack Dorsey, in response to Facebook CEO Mark Zuckerberg’s criticism about Twitter’s decision, insisted that the company was not an “arbiter of truth”:

This does not make us an “arbiter of truth.” Our intention is to connect the dots of conflicting statements and show the information in dispute so people can judge for themselves. More transparency from us is critical so folks can clearly see the why behind our actions.

Thank goodness! After all, 48 hours later Dorsey was retweeting a complete fabrication that, like most misinformation, seemed to confirm what many hoped to be true (Dorsey undid his retweet, but did not acknowledge the error). I mention this not to pick on Dorsey — I’ve made my own share of mistakes with regard to misinformation — but rather to emphasize just how fraught the determination of truth is. There is a reason why “more speech” has long been held as the ideal means of approaching the truth (more on this in a moment).

Third, centralized fact-checking is fighting the global information war on decidedly unfriendly turf. Perhaps in response to criticism that Twitter had fact-checked Trump but not the officials of other countries, the service attached a “Get the facts” label to this tweet from Lijian Zhao, the spokesperson for China’s Foreign Ministry: 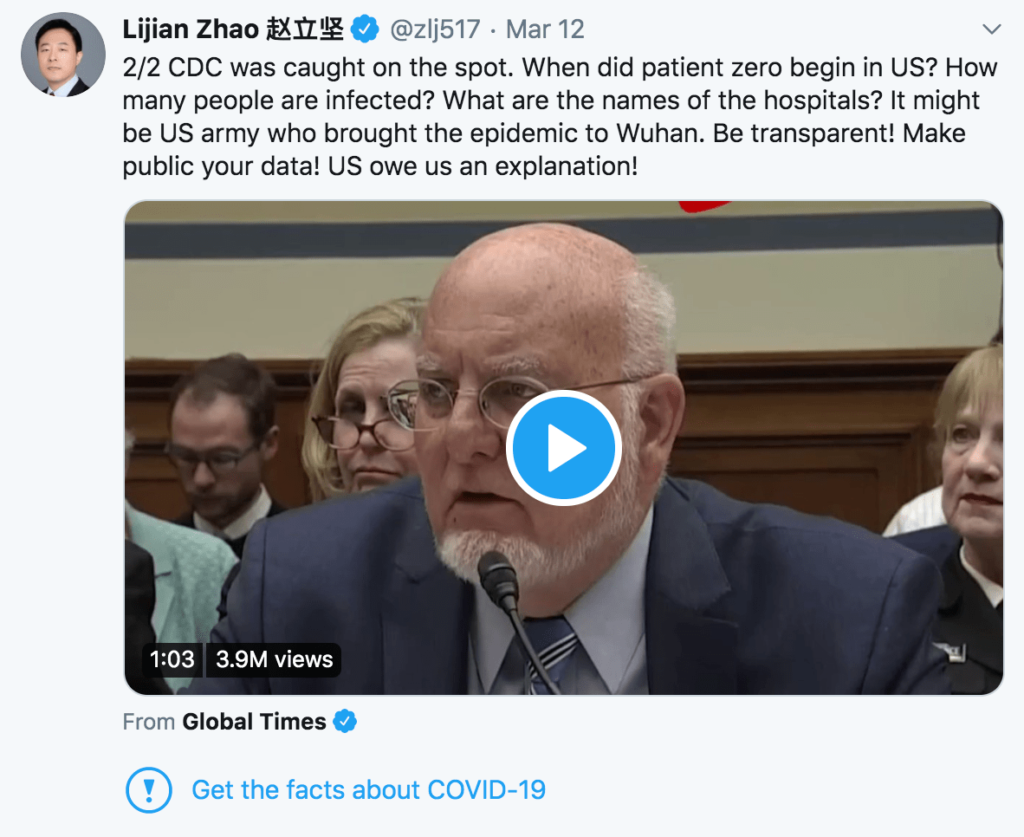 First off, I had to use an image because an embedded tweet didn’t include Twitter’s “Get the facts” label, suggesting that this feature isn’t fully baked. Secondly, you’ll note that this tweet is from March 12, highlighting the fact that Twitter’s addition of a fact-check link nearly three months later is about public perception, not actually helping viewers of this tweet know the truth (or, in the case of Trump’s tweet, the fact that Twitter’s warning made more people see the tweet than would have otherwise definitely makes one wonder what the real motivation was). Third, Lijian Zhao, a so-called Wolf Warrior diplomat, dedicated to showing up the U.S. at every turn, has to be reveling in Twitter’s action. China is more than happy to endorse a paradigm where truth is determined by a centralized actor.

Fourth, I mentioned it above, but yes, I believe in the “more speech” approach to discovering the truth. Before you groan, though, note that there are several ways to argue this point. One is the philosophical one, which is usually made in forums like this; it makes intellectual sense, but I get that it is tiresome, and I recognize the privilege arguments that are often raised in opposition. That, though, is why the phenomenon I described yesterday is so revelatory: the capacity to, at a moment’s notice, film police brutality and broadcast it to the entire world is one of most astounding examples of “more speech” that there has ever been. It is very hard, if you are being intellectually honest, to jump from “these social-media delivered phone camera videos of suppression by the state are evidence of systemic racism” to “a central authority figure should determine what is or is not true”; more speech and fewer gatekeepers empower the marginalized at the expense of those with power.

Fifth is the inevitability of the Internet, which eliminates the middle even as it powers both the individual and the Aggregator. The balance between the two, though, can be influenced, as China has shown. There, centralized players like Tencent, have been empowered to become all-encompassing, managing everything from chat to leisure to payments, all through a centralized system that is easily accessible to censors. Indeed, I am often amused by exhortations that Western companies imitate the Chinese Internet giants without even a passing acknowledgment that those giants dominating the Internet is very much in the interest of the Chinese Communist Party.

Absent control of the ISP layer, though, which is critical to China’s control of the Internet, there is always a way around centralized players. That might be email (hello!), message boards, or the dark web, but the reality is that gatekeepers are antithetical to the Internet’s design, and the tighter Facebook or Twitter were to squeeze, the more information would route around them with even less light — and to perhaps even darker ends — than otherwise.

Note, by the way, that I haven’t even touched on the most obvious objection to Facebook acting on this particular post. As I noted yesterday, Trump’s tweet has been republished broadly; at this point, to block it serves zero function as far as propagation is concerned. In other words, the only reason for Facebook to act is to express its political views about Trump’s tweet, and while that may be personally meaningful to the Facebook employees that object to Zuckerberg’s decision, it would be a disaster for American democracy. I wrote about this back in 2016 in The Voters Decide:

This brings us back to today’s world, and admittedly, the leap from a description of Facebook and Aggregation Theory to politics is not an obvious one: I’m not proposing that Donald Trump or anyone else is an aggregator. Indeed, given their power over what users see Facebook could, if it chose, be the most potent political force in the world.

There are two points to make about this reality:

I put “market” in quotes, but its worth noting that Donald Trump is the most fact-checked individual in history. This debate, if we are honest, is not about the determination of truth, but about the assertion of political power; I, while not entirely satisfied about the fact he has so much of it, am grateful Zuckerberg is declining to exercise his.

One final note about Facebook’s internal conflict; Casey Newton, who listened in on Zuckerberg’s meeting with Facebook employees about his decision, reported:

Another employee told me that Zuckerberg’s decision was supported by the majority of the company, but that people who agreed with it were afraid to speak out for fear of appearing insensitive. (An employee who spoke on the call echoed this point.)

First, for what it’s worth, this is hardly surprising: those that support censoring speech are probably more likely to shout down those that object; those that believe in a “more speech” approach are likely to accept more speech. This is something worth keeping in mind when it comes to media reports which are, by necessity, driven by those who disagree with the decision in question.

Second, this reinforces why the “more speech” point I made above is so important: I am increasingly convinced that the aims of those who disagree with Zuckerberg are in fact best served by more speech (often facilitated by Facebook), not less.

Third, I find the characterization of Zuckerberg’s stance as being craven wildly out of touch with reality. The difference between cultural power and political power has never been more stark at the moment, and Zuckerberg is getting the worst of both worlds: Twitter’s approach is bringing political power to bear on the industry as a whole, even as it ensures that cultural power is focused in the most critical way possible on Facebook’s choice. Even if you disagree with Zuckerberg, it is hard to look at the response this week and characterize it as lacking in conviction or courage.