– Walt Whitman, Song of Myself

Last week Snapchat reportedly turned down a $3 billion dollar all-cash offer from Facebook. Apparently Facebook was worried about losing the teen demographic, or perhaps they were unnerved by the 350 million photos Snapchat claims to process per day. What seems clear, though, is that Facebook is intent on “owning social.”

The only problem with this strategy is that the very idea of owning social is a fool’s errand. To be social is to be human, and to be human is, as Whitman wrote, to contain multitudes. Multitudes of apps, in my case.

In the last two days I have used 10 apps you might characterize as “social”. In no particular order:

In Mark Zuckerberg’s world, my behavior is at best nonsensical and inefficient, at worst a threat to Facebook in a zero-sum social face-off. After all, this isn’t the first time Facebook has tried to unify communications – that was the point of Facebook Messages, way back in November, 2010. From Wired:

Facebook is seeking to replace email with what it calls a “modern messaging system” that combines all the ways people send messages — including email, IM and SMS — into a single interface…

The new system, Facebook Messages, was announced Monday. It allows you to simply click on a friend’s face, type a message and hit Enter. Facebook handles the rest. And it comes with an optional “facebook.com” email address. But a new email address isn’t the point. Rather it is the unification of a variety of means of communication.

Unification, in 2010. Given the reality of what has happened since, it’s an idea that is positively quaint. However, for Facebook investors, $3 billion isn’t quaint at all: it would have been a massive waste of money for an app that is in fact not competitive with Facebook at all.

Look again at my list of apps: each of them has their own place. Some are for communicating with friends-and-family, others for a different audience centered around my interests. Some are more meaningful and permanent, others ephemeral and quickly forgotten. Some are for public consumption, and others are private. Some are photo-centric, others are about text. In fact, there is hardly any overlap at all – and none with Facebook: 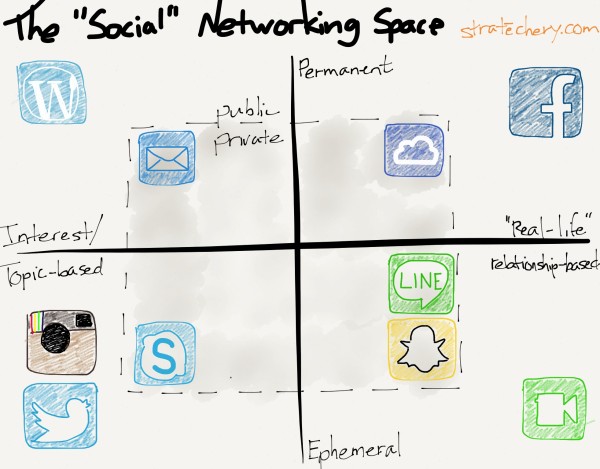 Facebook has made their choice: they are the public record of your life and the best way to connect with your friends and family. Snapchat works with friends, but in every other respect it’s the exact opposite product.

Facebook would do better to continue investing in improving their advertising signal. As I’ve written previously, Facebook is sitting on a display ad gold mine; they just need the targeting to match. That’s why Waze was such a loss. If they want to buy out a competitor, better to focus on one that either threatens their public-permanent space, or others – like Instagram – that are a great fit for their display business.

Most of all, though, Facebook needs to appreciate that their dominance of social on the PC was an artifact of the PC’s lack of mobility and limited application in day-to-day life. Smartphones are with us literally everywhere, and there is so much more within us than any one social network can capture.