The “Uncanny Valley” is most typically associated with animated films (although it was originally about robots). From Wikipedia:

The uncanny valley is a hypothesis in the field of human aesthetics which holds that when human features look and move almost, but not perfectly, like natural human beings, it causes a response of revulsion among human observers. Examples can be found in the fields of robotics, 3D computer animation, and in medical fields such as burn reconstruction, infectious diseases, neurological conditions, and plastic surgery. The “valley” refers to the dip in a graph of the comfort level of humans as subjects move toward a healthy, natural human likeness described in a function of a subject’s aesthetic acceptability.

I actually think the concept can be applied to many more things than just human aesthetics: anything that is almost perfect, but not quite, is actually worse than something that is good enough: 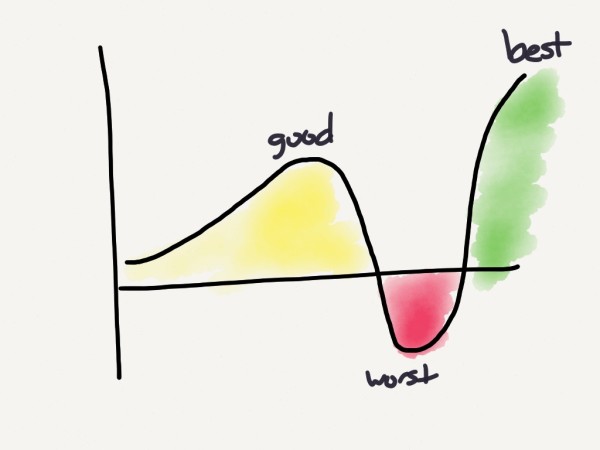 Collaboration is one of those buzzwords that will get you wasted in a drinking game; it’s on the lips of every innovation consultant, thought leader, and CEO. The concept – working together to make something great – seems straightforward, but the fact it’s always the proposed cure is evidence enough it’s hard to achieve.

The reason why is easier to understand when you understand what goes into true collaboration: mutual trust and respect, and the willingness and freedom to disagree. 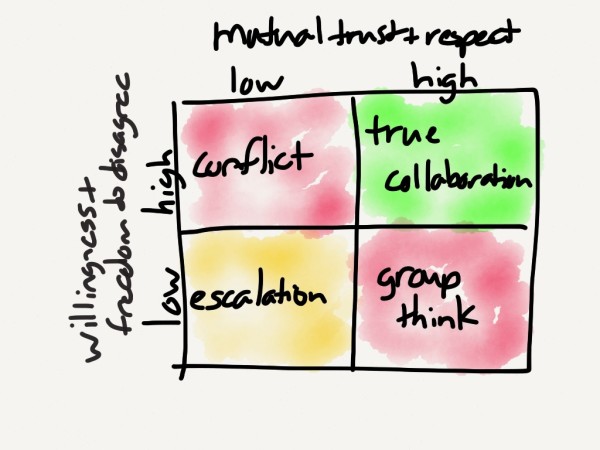 Both ingredients are really hard for humans in groups. Start with mutual trust and respect: we’re all naturally suspicious of those we aren’t intimate with, and that’s compounded by the anxiety of status and salary inherent in a workplace. It’s even worse at top companies, where nearly every employee grew up the smartest kid in their class and can’t help but try to prove they’re still the best.

The upside should be obvious: it really is possible for the whole to be greater than the sum of the parts. As much as we glorify the solitary coder or designer, the truth is that, especially in technology, breakthroughs are collaborative and iterative, borne of thousands of disagreements. It’s one reason Apple is absolutely committed to a functional organization; there, design, software, hardware, operations, and product marketing are all separated; every decision is necessarily made collaboratively, and (theoretically) results in a better outcome.

However, a company organized functionally that does not have the necessary cultural ingredients for true collaboration is actually in worse shape for having tried; the disagreements will turn into conflict, and the agreements made through groupthink will arguably be worse. 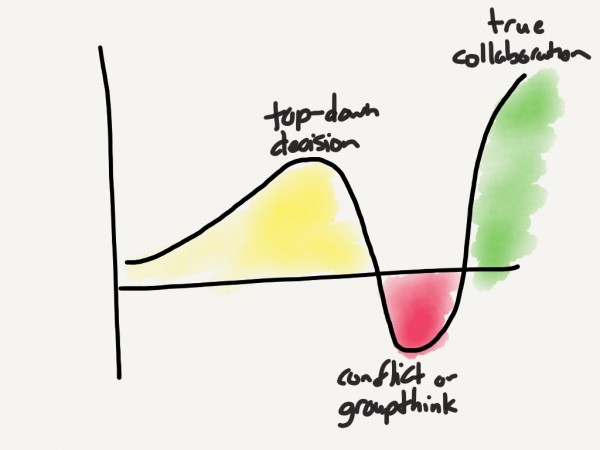 As I noted last week, saying that Microsoft lacks “the necessary cultural ingredients for true collaboration” is an understatement.

Everything is tied together at the CEO-level, which means communication channels must be excellent, both from the bottom up and also across functions. Moreover, the vast majority of employees only ever see a piece of the product; it’s up to the CEO to set the broad vision and ensure that it is being followed.

The upside is a holistic and integrated quality to the resultant products that is truly extraordinary. People talk about how the iPhone integrated hardware and software, but that is just a crude approximation for what is effectively a single vision of what a phone should be, down to the tiniest detail.

It’s on this point, actually, that concern and criticism of Tim Cook is most warranted. I’ve already made the case as to why he is a great CEO for Apple, but his greatest weakness – product vision – is hugely magnified by the fact that Apple is organized functionally, and thus especially reliant on a visionary leader (this should, of course, make it obvious why Steve Jobs was so insistent on a functional organization). Clearly Jony Ive has been nominated to fill the role of visionary; it is likely that at least one of Ive’s once-peers was not happy about that elevation.

As for Microsoft having a visionary leader, well…

A divisional org, on the other hand, pushes communication and decision-making down into the hierarchy; this makes broad, company-wide endeavors less likely – both breakthroughs, and disasters. 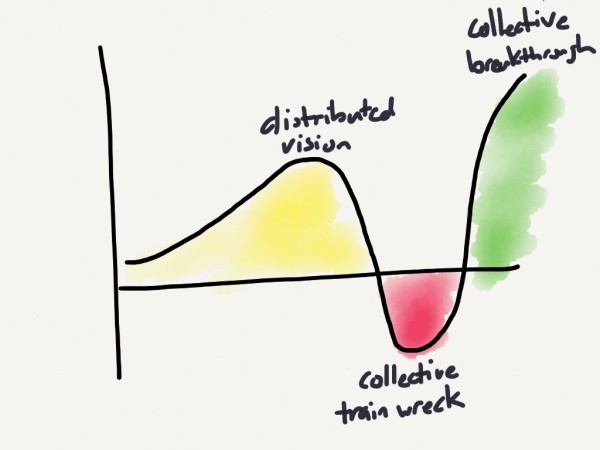 One of the more interesting elements of the Microsoft reorganization is that it in some ways seems inspired by former Windows President Steven Sinofsky and his thoughts on One Strategy. Sinofsky was a major proponent of functional organizations, and in fact transformed the Windows division from a divisional structure to a functional one, at least on the engineering side.

Both Windows 7 and 8 were the products of that organizational change, and bear out the idea that focus and prioritization make all the difference in the world (leaving aside the merits of the Windows 8 design, it is an engineering marvel, especially considering the timeframe within which it was built).

Still, the fact that Windows is such a massive product meant that Sinofsky himself estimated he only saw a fraction of what mattered:

I have been asked by many what it is like to be a “business leader” and I remind people that even at my job I have no say in tons of things that matter a lot to whether our work is successful (when thought of from the 4 P’s of marketing: product, price, promotion, placement I only have say in 25% of the business, at best). But we have built our team, both in terms of feature teams and in terms of engineering structure so that we can have a balance if we all operate from a shared plan.

If Sinofsky, one of the most iron-fisted executives you will ever see, only saw 25% of what mattered despite sitting at the only nexus for information flow (as noted above), what chance does Ballmer have sitting at the intersection of Windows, Office, Service, Xbox, Bing, etc.?

This is something for Apple to be concerned about, as well. Things like TVs and watches are fun to talk about, but they exact a real cost on the leadership team’s ability to manage the organization. 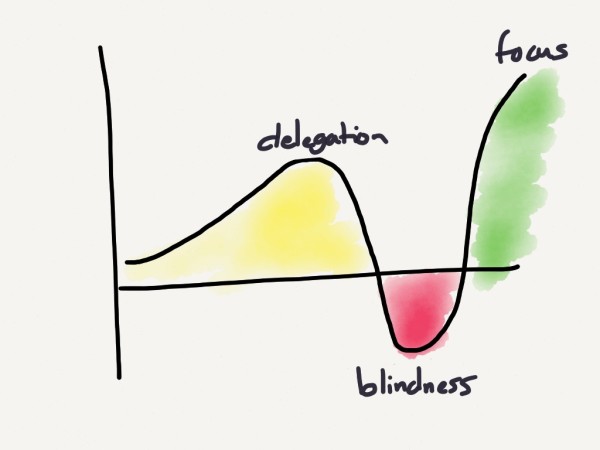 This is the necessary bookend to collaboration, one of the biggest reasons that functional organizations produce better products. If you are creating something new, would you rather its creators be the best in the world at what they do, or that they be someone trying their hand at a new role with an eye towards career advancement?

I touched on this briefly last week, but it’s worth a closer look:

There are thousands of employees at Microsoft building nice careers as well-rounded managers; they are all now (theoretically) superfluous, as broad management is only practiced at the CEO level in a functional organization. All these middle managers are likely to either sabotage the reorganization by clinging to their former authority, or simply leave the company. While the latter may be a theoretically good outcome, that is only the long run, in which time we are all dead. In the short run it could be a serious talent and experience drain.

The challenge for a functional organization is more subtle. The best sort of employee finds fulfillment in nothing more than the work they do; the more typical one eventually seeks greener pastures and/or burns out. 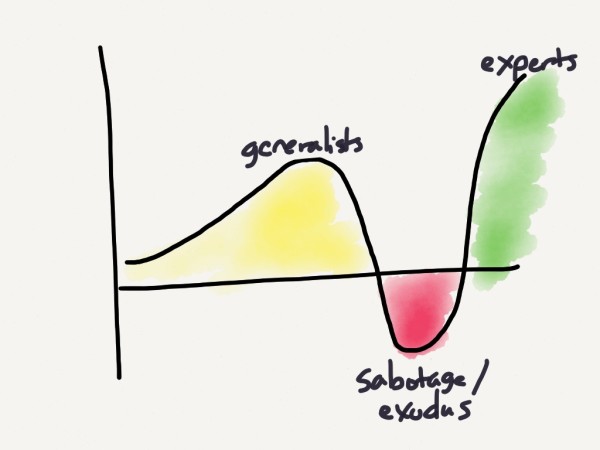 As I noted last week, all companies start out functionally organized. After all, they only have one product.

So why do they change, especially if functional companies make better products?

Let’s follow the typical path: Company A makes an amazing product, finds a great market fit, and starts to make a lot of money. They IPO. They continue to grow, and the stock goes up. And then the stock stops going up, because it’s not clear how they will continue to grow. A stock’s worth, after all, is simply the discounted sum of future earnings.

And so the company looks for another avenue of growth. They diversify, maybe successfully, but now they have two products. And soon, like DuPont, they see the wisdom in having two divisions.

Of course, those divisions are certainly related in some way, and it’s inevitable that considerations are given – or dictated, from the CEO – that decisions in one divisions favor the other division whenever possible. This consideration is called a strategy tax, and it’s a hindrance to product quality. So is the inevitable competition for resources, and the increasingly divided attention of the CEO.

It’s all interconnected. There is a tension between product quality, growth, and the stock market. The problem for Microsoft is they have already made their choice: they are a diversified company with a clear focus on the top and bottom lines. It’s not that a functional organization is a bad thing – it’s a great thing – but Microsoft is simply no longer capable of climbing that hill.

And that leaves the uncanny valley.