I share Professor Clayton Christensen’s consternation about the overuse of the term “disruption.” In this month’s issue of the Harvard Business Review, Christensen and his co-authors Michael Raynor and Rory McDonald write:

Disruption theory is in danger of becoming a victim of its own success. Despite broad dissemination, the theory’s core concepts have been widely misunderstood and its basic tenets frequently misapplied…

As the article notes, disruption is a bottom-up process:

“Disruption” describes a process whereby a smaller company with fewer resources is able to successfully challenge established incumbent businesses. Specifically, as incumbents focus on improving their products and services for their most demanding (and usually most profitable) customers, they exceed the needs of some segments and ignore the needs of others. Entrants that prove disruptive begin by successfully targeting those overlooked segments, gaining a foothold by delivering more-suitable functionality—frequently at a lower price. Incumbents, chasing higher profitability in more-demanding segments, tend not to respond vigorously. Entrants then move upmarket, delivering the performance that incumbents’ mainstream customers require, while preserving the advantages that drove their early success. When mainstream customers start adopting the entrants’ offerings in volume, disruption has occurred.

In fact, many of technology’s most successful companies, both old and new, have started (or remain) at the high end — the opposite of a Christensen disruptor. Apple is the most famous example, and both the rise and durability of the iPhone in particular point to two big holes in the theory:

Still, neither critique is incompatible with disruption theory; they were, and are, presented as ways the theory could be made better, part of an endeavor Christensen himself has been engaged in for the last twenty years. However, understanding the success of Uber, the company at the center of Christensen’s latest article, is another matter entirely.

Disruption: A One Way Street

As noted, disruption is a bottom-up process, and from The Innovator’s Dilemma on Christensen has made clear disruption always starts on the low-end. Christensen wrote in a chapter entitled “What Goes Up, Can’t Go Down”:

Three factors — the promise of upmarket margins, the simultaneous upmarket movement of many of a company’s customers, and the difficulty of cutting costs to move downmarket profitably — together create powerful barriers to downward mobility. In the internal debates about resource allocation for new product development, therefore, proposals to pursue disruptive technologies generally lose out to proposals to move upmarket. In fact, cultivating a systematic approach to weeding out new product development initiatives that would likely lower profits is one of the most important achievements of any well-managed company.

Indeed, for all that the iPhone has done to confound Christensen’s theory, it has, as predicted, never gone down-market. Christensen makes the same critique about Uber, claiming the company is not disruptive because it didn’t start out by undercutting taxis:

A disruptive innovation, by definition, [originates in low-end or new-market footholds] footholds. But Uber did not originate in either one. It is difficult to claim that the company found a low-end opportunity: That would have meant taxi service providers had overshot the needs of a material number of customers by making cabs too plentiful, too easy to use, and too clean. Neither did Uber primarily target nonconsumers—people who found the existing alternatives so expensive or inconvenient that they took public transit or drove themselves instead: Uber was launched in San Francisco (a well-served taxi market), and Uber’s customers were generally people already in the habit of hiring rides.1

In fact, Christensen understates his case: Uber started by offering black car service at a price significantly higher than taxis; it was only with the introduction of UberX a full three years after the company was founded that the service became competitive with taxis on a price basis. Now, though, UberX is not only often cheaper, UberPool always is; the company is actually moving in the exact opposite direction of a disruptor, which means Christensen is quite justified in claiming that Uber is not disruptive.

And yet, the devastating impact Uber is having on the industries it is competing with looks an awful lot like disruption’s aftermath: the market for ride-sharing is far larger than the taxi-market ever was (a la new market disruption), and incumbents are not only losing riders but are also seeing the value of their most prized assets (taxi medallions) plummeting. To simply say that Uber is a sustaining innovation is to dramatically undersell what is happening.

Disruptive Technologies: Catching the Wave, the Harvard Business Review article where Christensen first laid out disruption theory, came out 20 years ago; it was, in my estimation, the pinnacle of management theory. Christensen’s core insight was that the managers of disrupted companies were not stupid, but rather exceedingly rational:

Using the rational, analytical investment processes that most well-managed companies have developed, it is nearly impossible to build a cogent case for diverting resources from known customer needs in established markets to markets and customers that seem insignificant or do not yet exist. After all, meeting the needs of established customers and fending off competitors takes all the resources a company has, and then some. 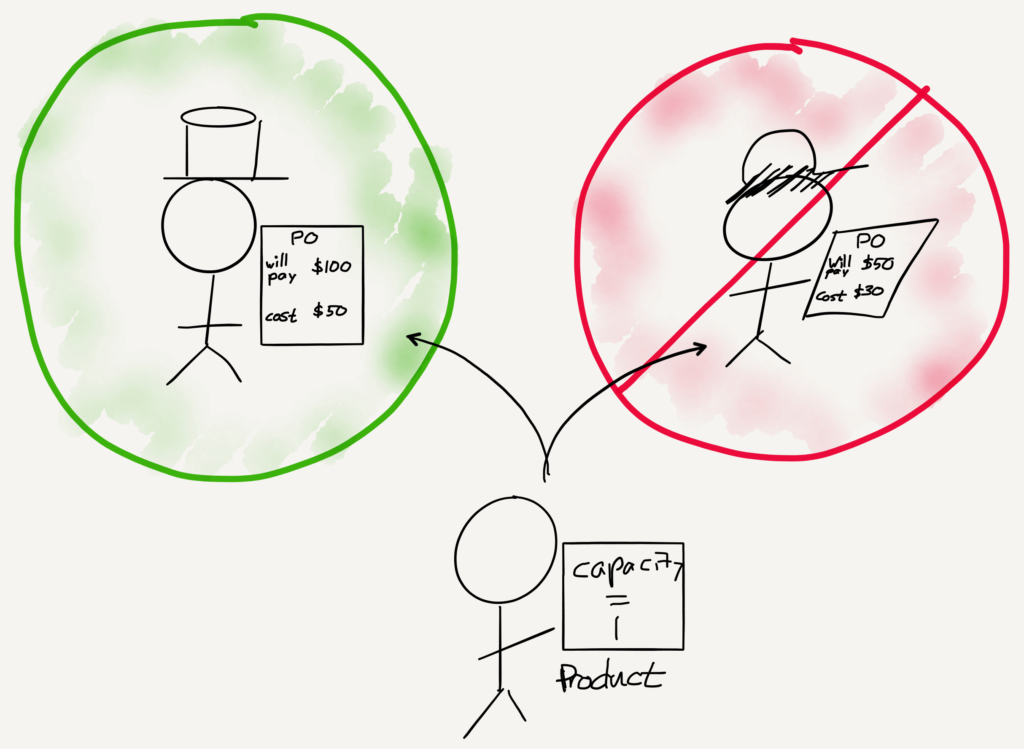 Every additional customer accrued a cost, whether that be the marginal cost of serving them or the opportunity cost of not serving a different customer. Given that, it was, as Christensen noted, perfectly rational to focus on the most profitable ones.

However, something else momentous happened around 20 years ago: the emergence of the Internet. As I’ve written repeatedly, including two weeks ago in Selling Feelings and this summer in Aggregation Theory, the Internet has completely transformed business by making both distribution and transaction costs effectively free. In turn, this has completely changed the calculus when it comes to adding new customers: specifically, it is now possible to build businesses where every incremental customer has both zero marginal costs and zero opportunity costs.

To be sure, it takes time to scale such a company, but given the end game of owning the entire market, the rational approach is not to start on the low-end, but rather the exact opposite. After all, while marginal costs may be zero, providing a superior experience in the age of the Internet entails significant upfront (fixed) costs, and while those fixed costs are minimized on a per-customer basis at scale, they can have a significant impact with a small customer base. Therefore, it makes sense to start at the high-end with customers who have a greater willingness-to-pay, and from there scale downwards, decreasing your price along with the decrease in your per-customer cost base (because of scale) as you go (and again, without accruing material marginal costs). 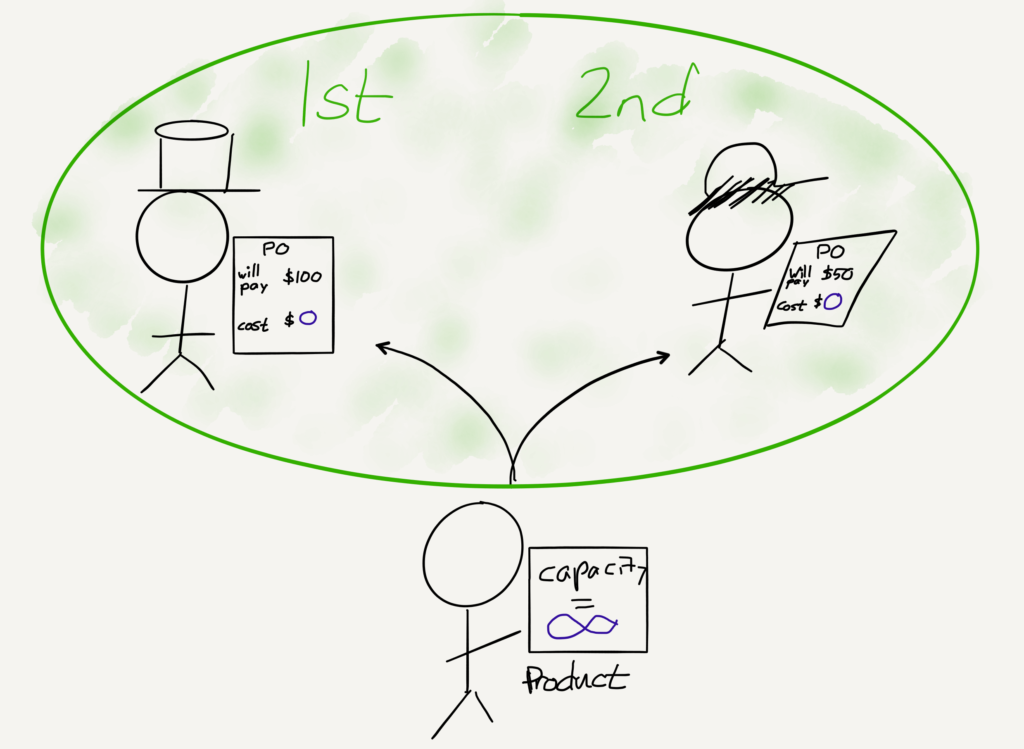 This is exactly what Uber has done: the company spent its early years building its core technology and delivering a high-end experience with significantly higher prices than incumbent taxi companies. Eventually, though, the exact same technology was deployed to deliver an lower-priced experience to a significantly broader customer base; said customer base was brought on board at zero marginal cost (to be sure, there is more to Uber’s success than that; I laid out in Why Uber Fights how Uber’s aggregation of riders gives them leverage in bringing drivers onto their platform in a virtuous cycle).

I stated above that disruption was the pinnacle of management theory, and I chose my tense carefully: the truth is that Christensen’s attempt to demarcate what is and isn’t disruption perhaps has far deeper implications for the theory than he realized. Many of the most important new companies, including Google, Facebook, Amazon, Netflix, Snapchat, Uber, Airbnb and more are winning not by giving good-enough solutions to over-served low-end customers, but rather by delivering a superior experience that begins at the top of a market and works its way down until they have aggregated consumers, giving them leverage over their suppliers and the potential to make outsized profits.

And, by extension, incumbent companies are actually in far more trouble than they were 20 years ago: the issue isn’t that they are constrained by the profit motive from going down-market, but rather that the distinction between up-market and down-market is, from a cost basis anyways, increasingly non-existent. All that matters is the quality of the experience and the ability to scale, two skills that companies founded on controlling distribution and segmenting customers are fundamentally deficient in.

That’s not to say that disruption theory doesn’t still have its place: while the iPhone may not have been disruptive to phones (it obsoleted them), Christensen has noted that the iPhone did in fact disrupt the PC. Similarly, while I agree that Uber is not disruptive to taxis (it is winning through aggregation), what could potentially happen to the personal automobile industry happily fits the theory perfectly.