I am saturated in digital life and I want to return to the actual world again. I’m a human being before I am a writer; and a writer before I am a blogger, and although it’s been a joy and a privilege to have helped pioneer a genuinely new form of writing, I yearn for other, older forms. I want to read again, slowly, carefully. I want to absorb a difficult book and walk around in my own thoughts with it for a while. I want to have an idea and let it slowly take shape, rather than be instantly blogged. I want to write long essays that can answer more deeply and subtly the many questions that the Dish years have presented to me. I want to write a book.

In the hours and days after that post, it became a meme to say that “blogging is dead” (BuzzFeed’s Ben Smith has led the charge for a while now). You’ll be unsurprised to know that I disagree, but it seems Sullivan anyways wouldn’t understand why this rebuttal has taken four full days to appear. After all, according to Sullivan’s definition of blogging — “daily, hourly, always-on-deadline stress” consisting of “idea[s]…instantly blogged” — my having first enjoyed a weekend with my family while I turned over this debate in my head, and only then written what I hope is a thoughtful reply, means I’m doing it wrong.

The truth, though, is that blogging has evolved. It is absolutely true that the old Sullivan-style — tens of posts a day, mostly excerpts and links, with regular essays in immediate response to ongoing news — is mostly over. No one said it better than blogger extraordinaire Jason Kottke:

Sometime in the past few years, the blog died. In 2014, people will finally notice. Sure, blogs still exist, many of them are excellent, and they will go on existing and being excellent for many years to come. But the function of the blog, the nebulous informational task we all agreed the blog was fulfilling for the past decade, is increasingly being handled by a growing number of disparate media forms that are blog-like but also decidedly not blogs.

Instead of blogging, people are posting to Tumblr, tweeting, pinning things to their board, posting to Reddit, Snapchatting, updating Facebook statuses, Instagramming, and publishing on Medium…

A month prior to Kottke’s piece I created the Social/Communications Map:2 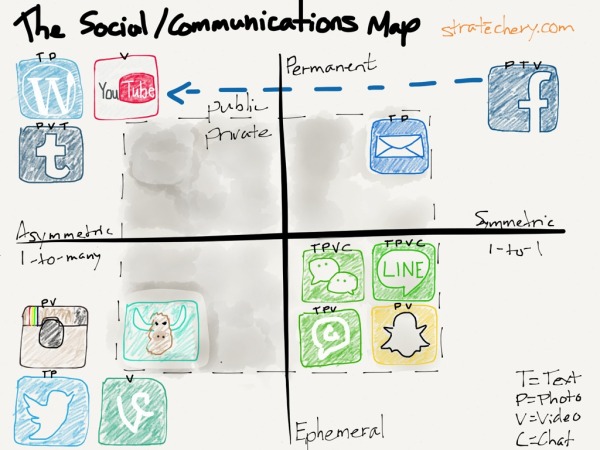 In many respects, this map — indeed, the entire history of social media, particularly the public-facing services — is a story of unbundling the old-school blog. Twitter has replaced link-posts and comments, Instagram has replaced pictures, and Facebook has replaced albums and blogrolls; now Medium is seeking to replace the essay. None of this is a bad thing: literally billions more people now have a much simpler way to express themselves online thanks to the ease-of-use that is characteristic of any service that seeks to focus on one particular aspect of communication, a big contrast to a blog’s ability to do anything and everything relatively poorly. It’s fair to ask just what a blog is good for anyway.

A big problem with this entire discussion is that there really isn’t a widely agreed-upon definition of what a blog is, thanks in part to the rise of sites like TechCrunch that ran on WordPress and presented posts in reverse-chronological order and so, at least in the beginning, were called “blogs”; add to that the thinly-disguised PR-channels known as “company blogs” and it’s easy to get confused.

And so, to be clear, when I speak of the “blog” I am referring to a regularly-updated site that is owned-and-operated by an individual (there is, of course, the “group blog,” but it too has a clearly-defined set of authors). And there, in that definition, is the reason why, despite the great unbundling, the blog has not and will not die: it is the only communications tool, in contrast to every other social service, that is owned by the author; to say someone follows a blog is to say someone follows a person (This applies both for amateur and professional bloggers; most of the rest of this post is concerned with the latter).

This is more than a semantic point; Ezra Klein, one of the first journalists to truly build his career through blogging, and now the editor-in-chief of Vox, wrote in What Andrew Sullivan’s exit says about the future of blogging:

That, though, is good for Vox, given their dependence on advertising. As I’ve noted previously while writing about newspapers, your business model is your destiny, and an advertising business model demands huge amounts of inventory served to a large number of readers targeted with a massive amount of data.3 Note carefully those words: “huge,” “large”, and “massive” are antithetical to my definition of a blog – something defined by a single individual.

It turns out, though, that there are more business models than simply advertising, as Sullivan himself sought to show. Sullivan was, for the last two years, supported by reader subscriptions to the tune of nearly one million dollars a year, and while many were skeptical of Sullivan’s efforts when he started, his ability to raise money shouldn’t have been a surprise: his is a singular voice — to put it in economic terms, Sullivan’s writing had a low elasticity of substitution — so people were happy to pay for something they couldn’t get anywhere else.4 Right there was the exact loyalty that Klein fears has been lost.

Moreover, Klein is wrong about blogging and scale:

Sullivan was the closest we had to someone trying to run a blog with real scale. He was trying to make his blog — and its sizable audience — into a business. But blogging, for better or worse, is proving resistant to scale.

But Sullivan did have a viable business, and it scaled wonderfully: it cost him the same amount of both time and money to serve 1,000 subscribers as it would have to serve 100,000, or 1 million,5 and he didn’t need to change a thing about himself or his content to do it. No, it’s not scale that is the problem, but rather reach.

I am, of course, acutely aware that there is a tradeoff when it comes to the subscription business model: by making something scarce, and worth paying for, you are by definition limiting your number of readers.6 Stratechery, though, serves a niche, and niches are best served by making more from customers who really care than from milking pennies from everyone.

Here’s the thing, though: the upside of my business model is that Stratechery has all of the things that Klein claims are being lost:

It’s this last part that is the most rewarding: Vox, in its desire for reach, asks nothing of its readers beyond tolerance for posts they don’t care about, which means no one should be surprised the user experience of the site is increasingly annoying. I, on the other hand, ask for money and am heavily motivated to deliver value in return – the relationship is reciprocal. That means not wasting my readers’ time; it means focusing on quality over quantity; indeed, it means waiting four days to write something thoughtful (hopefully!) instead of simply trying to be first.8

That Would Be Fine For Ezra

Whenever I write about Stratechery’s business model I constantly hear objections along the lines of “That’s fine for Ben,” the insinuation being that what I do is not replicable. And, to be sure, I am by no means arguing that you can make money from a blog just because you want to. At the risk of humblebragging, you need to offer something unique, and at least 2,000 people believe I do.9

Klein, though, is unique, and he has 732k Twitter followers and a history of success to show for it. That, more than anything, is why I found his piece in particular so frustrating to read: blogs are not dead, but Klein’s is, and while I don’t begrudge him his choice, I question the degree to which he knows he made one.10

Moreover, there are reasons to be optimistic beyond Sullivan’s success, or my own:

Forgive me if this article read a bit too much like an advertisement for Stratechery; the honest truth is my fervent belief in the individual blog not only as a product but also as a business is what led to my founding this site, not the other way around. And, after this past weekend’s “blogging-is-dead” overdose, I almost feel compelled to note that my conclusion — and experience — is the exact opposite of Klein’s and all the others’: I believe that Sullivan’s The Daily Dish will in the long run be remembered not as the last of a dying breed but as the pioneer of a new, sustainable journalism that strikes an essential balance to the corporate-backed advertising-based “scale” businesses that Klein (and the afore-linked Smith) is pursuing.12