One normally wouldn’t expect farmer psychology and technology to have much in common, but drawing unexpected connections is the mark of truly innovative thinkers, and Geoffrey A. Moore’s Crossing the Chasm is a truly innovative book.

Building on the work of three Iowa State professors studying the spread of hybrid seed corn, Moore developed the technology adoption cycle, which breaks the market for new technologies into five parts: 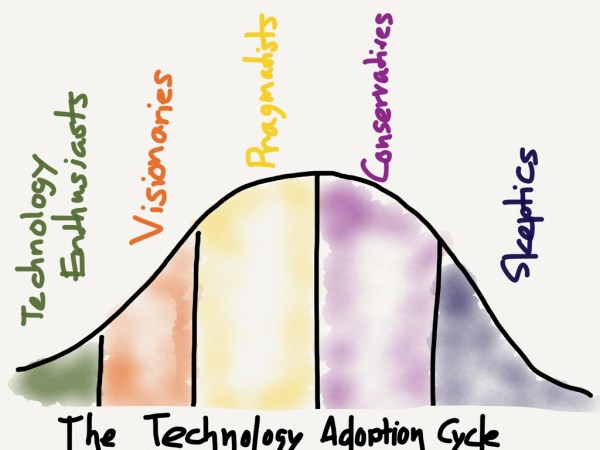 Moore was primarily concerned with “crossing the chasm” from the early market – enthusiasts and visionaries – to the mainstream market – pragmatists and conservatives, and if there is one product that clearly crossed the chasm, it is the smartphone. There are an estimated two billion smartphones in use around the world, and in developed countries penetration is reaching the 80% mark – only the skeptics are left. Surely this is a mature market.

That, though, makes the fates of the three biggest smartphone companies – Apple, Xiaomi, and Samsung – particularly interesting:

All of this seems to fly in the face of Moore’s assumption that late-stage adoption would be driven by price and pragmatism (or, in the case of conservatives, necessity). Price and pragmatism might as well be Samsung’s motto, while Apple is super expensive and Xiaomi is avowedly geeky.1

I suspect the problem is that while Moore has updated “Crossing the Chasm” (the third edition came out last January), the book is still a product of 1991 when nearly all technology buyers were businesses located in developed countries. Smartphones don’t have either qualification: people buy smartphones, not businesses, and developing countries are just as much a market as developed ones.

Apple and the Conservatives

According to Moore, high prices are only sustainable on the left side of the adoption curve:

The first perspective to set on pricing is the customers’, and, as we noted in the section on discovering the chasm, that varies dramatically with their psychographics. Visionaries – the customers dominating the early market’s development – are relatively price-insensitive. Seeking a strategic leap forward, with an order-of-magnitude return on investment, they are convinced that any immediate costs are insignificant when compared with the end result. Indeed, they want to make sure there is, if anything, extra money in the price, because they know they are going to need special service, and they want their vendors to have the funding to provide it. There is even a kind of prestige in buying the high-priced alternative. All this is pure value-based pricing. Because of the high value placed on the end result, the product price has a high umbrella under which it can unfold.

Certainly Apple has captured the visionaries, but how is it that the iPhone continues to grow? After all, Moore argues that conservatives will behave the exact opposite:

At the other end of the market are the conservatives. They want low pricing. They have waited a long time before buying the product – long enough for complete institutionalization of the whole product, and long enough for prices to have dropped to only a small margin above cost. This is their reward for buying late. They don’t get competitive advantage, but they do keep their out-of-pocket costs way down. This is cost-based pricing, something that will eventually emerge in any mainstream market, once all the other margin-justifying elements have been exhausted.

In this Moore’s thinking is not unlike Clayton Christensen’s: low-end disruption theory is also focused on performance and price. In a new market – the visionary market – when no product is good enough, the integrated provider can sell superior performance with a margin to match, but over time, as the technology becomes “good enough,” lower-priced modular competitors will take over the market.

However, as I argued in Best, in consumer markets the user experience is just as important.

The primary flaw in this conclusion, as I detailed last year, is that the Christensen evaluation of “good enough” only considers technical capabilities. Christensen did later add the idea of emotional jobs-to-be-done – this covers things like luxury bags, for example, which confer status – but that doesn’t fully explain Apple in particular. Instead, my position is there is a third component of product capability: the user experience. Moreover, the user experience is unique in that, like emotional jobs-to-be-done, a product can never be “too good,” and, like technical jobs-to-be-done, it is always possible to improve – or to fall behind.

Moreover, if user experience matters generally, it matters the most to conservatives. Moore notes:

The truth is, conservatives often fear high tech a little bit. Therefore, they tend to invest only at the end of a technology life cycle, when products are extremely mature, market-share competition is driving low prices, and the products themselves can be treated as commodities. Often their real goal in buying high-tech products is simply not to get stung. Unfortunately, because they are engaging with the low-margin end of the market, where there is little motive for the seller to build a high-integrity relationship with the buyer, they often do get stung. This only reinforces their disillusion with high tech and resets the buying cycle at an even more cynical level.

If high-tech businesses are going to be successful over the long term, they must learn to break this vicious circle and establish a reasonable basis for conservatives to want to do business with them. They must understand that conservatives do not have high aspirations about their high-tech investments and hence will not support high price margins. Nonetheless, through sheer volume, they can offer great rewards to the companies that serve them appropriately.

I think Moore was spot-on on the psychology of conservatives, but completely underestimated their willingness to pay for a solution that allays their fear. These customers don’t want leftover technology that barely works. They want technology that works better. Specifically, Apple’s focus on the user experience ought to be even more attractive to conservatives than it is to visionaries, and this very sizable group is potentially more willing to pay for a solution that is easier to use.

If indeed Apple has broken through with conservatives, this has powerful implications for all kinds of companies: smartphones are the tip of the spear when it comes to the spread of technology into every part of society, and what Apple may be demonstrating is that there is real money to be made amongst late adopters if the user experience is demonstrably superior. To be sure, Apple’s powerful brand and reputation is hard to replicate,2 but the iPhone’s continued success offers hope that customers will pay for true differentiation, not trickle-down technology.

Xiaomi and the Visionaries

If Apple is doing surprisingly well on the right side of the adoption cycle, I think the best way to think about Xiaomi is that they are competing in a different market entirely. For much of China and especially India, price matters not because people don’t care, but simply because many don’t have very much money.

This is a critical distinction: in Moore’s telling, pragmatists and conservatives pay attention to price simply because they aren’t willing to pay a premium. They have the capability, but not the desire. This, though, does not describe the typical Xiaomi customer. From an interview I conducted with Xiaomi Vice President of International Hugo Barra (members only):

BT: Who is your target customer in China?

HB: Our target customer in China are the 18 to 30 year olds, reasonably well educated, reasonably geeky, and value-orientated [i.e. not rich] and who appreciate the high spec. They are the ones who become the ambassadors for the brand to other audiences…

BT: What about internationally?

HB: Largely the same thing. I think we what we’re learning in India in particular is that the IT-educated is extremely large. I think a lot of that is a result of India’s tradition of being the IT back office of the world. In India, even the Red Mi product line attracts the IT-educated customer who just doesn’t have the money to buy one of our high-end products. But we find ourselves having a conversation about features and specs with a customer who bought Red Mi 1S that in other markets I would only have with someone who is buying a high end product. We’ve never experienced a level of scrutiny at a spec and performance level on a Red Mi product that we have in India.

These customers are not conservative, or even pragmatists: they are enthusiasts and visionaries who simply don’t have very much money. The proper way to reach them, then, is not to sell them trickle-down technology: they will see right through that, and dismiss it out of hand. Rather, the solution to is develop new business models – indeed, in the case of Xiaomi, a new company – that is built from the ground-up to serve their specific needs.

This, too, is a powerful opportunity: there are far, far more potential customers in developing countries than there are in developed ones, but just because they don’t have much money does not mean they are technological laggards. Indeed, many of these customers are even more advanced when it comes to being mobile first because of the lack of a PC legacy, and they will embrace a brand that lets them live on the cutting edge.

To be sure, there is still innovation happening among rich consumers in the developed world – Uber is evidence of that! However, I suspect it is these two markets – conservatives in developed countries, and enthusiasts and visionaries in developing ones – that will provide some of the biggest opportunities over the next few years. The smartphone has opened the door: which companies will walk through it?