While the “look-at-the-silly-millenials” genre tends to be a bit tiresome, the Wall Street Journal came up with a novel angle earlier this month: the TV antenna.

The antenna is mounting a quiet comeback, propelled by a generation that never knew life before cable television, and who primarily watch Netflix, Hulu and HBO via the Internet. Antenna sales in the U.S. are projected to rise 7% in 2017 to nearly 8 million units, according to the Consumer Technology Association, a trade group…

Since the dawn of television, the major networks have broadcast signals over the airwaves. It is free after buying an antenna, indoor or outdoor, and plugging it into your TV set. It still exists, though now most consumers have switched to cable television, which includes many more channels and costs upward of $100 a month.

The story is even more ironic when you consider the origins of cable TV. In the late 1940s, households that, due to geography, could not receive over-the-air television signals in their homes, banded together to erect “community antennas” on mountain tops or tall buildings, and then ran cables from said antennas to individual houses. In other words, cable TV originated as a means to get the free TV that was broadcast to everyone.

It turned out, though, that these “super antennas” could pick up not only local broadcast signals but also signals from stations hundreds of miles away; that meant that having cable access didn’t simply bring households to parity with customers using in-house antennas: cable TV was actually better. And while the FCC soon killed the ability of cable operators to offer those far-off channels, the idea of using cable access to offer additional differentiated content inspired Charles Dolan and Gerald Levin to launch the United States’ first pay-TV network in 1972; they called it the Home Box Office, now more commonly known by its acronym, HBO.

HBO pioneered the use of satellites to spread its content to all those community access cable networks; TBS, an Atlanta local television station owned by Ted Turner soon joined them, at first offering content for free, funded by advertising. Eventually, though, TBS and other channels, including the USA Network and an all-sports venture called ESPN, realized that the entrepreneurs investing in building out cable systems needed content to entice new subscribers in order to pay off their fixed costs: that meant the ability to charge fees on a per-subscriber basis — provided, of course, that the cable channel charging such fees actually had content that was worth paying for.

What made this transition easier is that cable operators were already charging customers for access; cable channels didn’t have to charge customers directly, and if their subscriber fees resulted in higher cable rates, well, that wasn’t their problem! Indeed, it wasn’t a problem for anyone: thanks to bundle economics everyone was happy. Cable operators charged more but justified increases with more and more cable channels; customers may have grumbled but increasingly found cable indispensable, thanks to cable networks doing exactly what they were incentivized to do: create or acquire content that was worth paying for.

Perhaps the oldest theme on Stratechery is the importance of understanding the difference between vertical and horizontal companies; in May 2013 I wrote of Apple and Google: 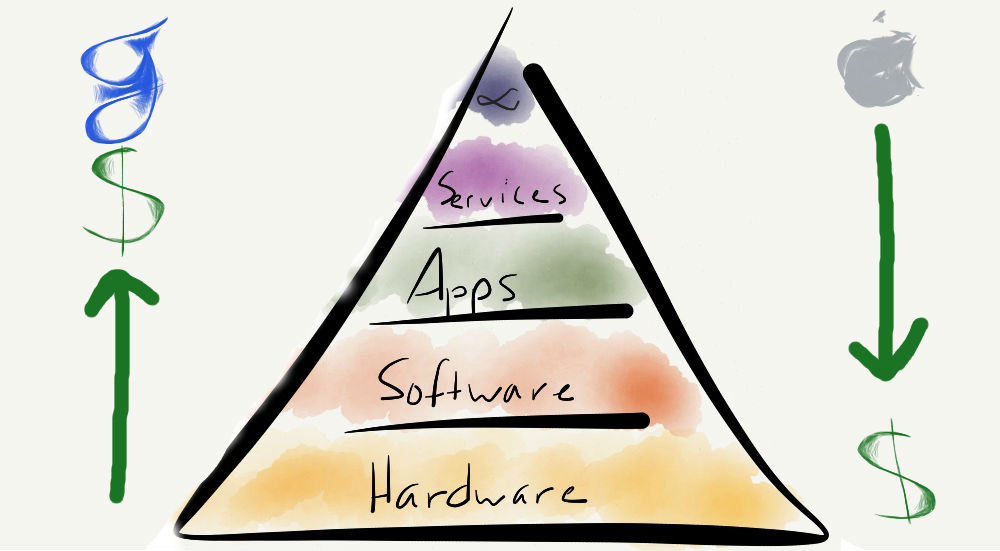 Apple invests in software, apps, and services to the extent necessary to preserve the profit they gain from hardware. To serve another platform would be actively detrimental to their bottom line. Google, on the other hand, spreads their services to as many places as possible – every platform they serve increases their addressable market.

Vertical companies like Apple achieve profits by selling differentiated goods at high margins. Horizontal companies like Google, on the other hand, achieve profits through scale, which by extension means being free (or as low cost as possible) is more important than being the “best”; the brilliance of Google’s model, of course, is that having more users, and thus more data, means it is the best as well.

Indeed, that is the foundation of another major Stratechery theme: Aggregation Theory. Some companies, in markets with zero distribution costs and zero transactions costs (like search, for example), can leverage an initial user experience advantage into a virtuous cycle: new users attract new suppliers, which in turn increases the user experience, thus attracting even more users, in turn attracting more suppliers, until the aggregator has all the users and all the suppliers. Naturally, given that the payoff is, as I said, all the users, aggregators are horizontal companies.

Netflix is an aggregator, perhaps my favorite example of all, in part because their industry — television — was in a far stronger position than the text-based industries aggregated by Google and Facebook. Making good content is hard, and expensive, and cable has always been a good deal; that Netflix has been as successful as it has is perhaps the most powerful example there is of how an initial user experience advantage can lead to a dominant position in an industry.

Netflix is also disruptive; while the term is overused, the formulation is actually quite simple: a new entrant leverages a technical innovation to serve customers with a business model incumbents cannot compete with, and over time moves up the value chain until those incumbents end up with a worse product that is more expensive to boot.

In the case of Netflix the innovation was streaming over the Internet: it was both a user experience breakthrough that gained the company customers, providing revenue with which the company could start to produce its own content, and also an enabler of a new business model — content everywhere. From a recent feature in Variety:

No media company today is expanding faster and is more talked about, admired, feared and debated than Netflix — which has upended the traditional models for television and inspired binge culture. “They totally made television global, and that was an unheard-of concept,” says Harvey Weinstein. “Whoever thought of buying universal rights to anything?” Depending on where you stand, Netflix is either saving Hollywood or wreaking havoc on an already unstable industry.

Netflix’s recent deal with longtime ABC Studios showrunner Shonda Rhimes draws that line quite nicely: for content creators Netflix’s rise has been a boon, not only financially but also creatively; for networks the streaming service is nothing but a threat, not just for talent but also viewer attention, and, inconveniently, a source of income at the same time.

Rhimes former employer, Disney, is a perfect example. Back in 2012 the media company signed a deal with Netflix to stream many of the media conglomerate’s most popular titles; CEO Bob Iger had crowed on an earnings call earlier that year:

We feel very, very good about opportunities in SVOD and on digital platforms, as we’ve seen and other large media companies have seen the opportunities to monetize owned IP are only growing not just because of new technology but globally. And I think you’ll continue to see growth in both revenue and growth in bottom line, in income, from output deals to these third party or new platform owners. An exciting time for intellectual property owners.

Iger’s excitement was straight out of the cable playbook: as long as Disney produced differentiated content, it could depend on distributors to do the hard work of getting customers to pay for it. That there was a new distributor in town with a new delivery method only mattered to Disney insomuch as it was another opportunity to monetize its content.

The problem now is obvious: Netflix wasn’t simply a customer for Disney’s content, the company was also a competitor for Disney’s far more important and lucrative customer — cable TV. And, over the next five years, as more and more cable TV customers either cut the cord or, more critically, never got cable in the first place, happy to let Netflix fulfill their TV needs, Disney was facing declines in a business it assumed would grow forever.

The company finally responded earlier this month: not only did Disney terminate its deal with Netflix, CEO Bob Iger announced plans for Disney’s own streaming service, populated not only with the company’s family-friendly library but also original shows. Make no mistake, this is a big deal, and strategically sound; Disney, though, faces an under-appreciated challenge in making this streaming service a success: its own fundamental nature as a company.

One of the luxuries of monopoly is that a company doesn’t need to make the vertical/horizontal distinction I referenced earlier; Microsoft, for example, profited for years with a vertical-type business model — making money on device sales, via licensing — without ever developing an internal culture suited towards creating differentiation that customers would pay for. The presumption was they would have no choice, leaving the company free to focus on horizontal empire expansion.

That is a big reason why the company floundered when the rise of mobile reduced PCs to a minority position in the market; in an effort to preserve the business model former CEO Steve Ballmer attempted to build a devices business that Microsoft was fundamentally unsuited for. And, on the flipside, CEO Satya Nadella’s greatest achievement has been shifting the company towards non-Windows-dependent services that serve everyone, the sort of approach that Microsoft as a company is far better at.

Disney has the opposite problem: the company is really good at creating differentiated content — the absolute best in the business. The business model, though, has been a horizontal one. Thanks to the cable bundle the company has long since grown accustomed to getting a little bit of money from everyone, not a lot from the smaller number of folks who are willing to pay a premium for Disney’s differentiation.

The challenge for Disney is that as that old business erodes, the freedom to not choose between a vertical and horizontal model will erode as well:

The worst approach would be to try and have it both ways: a streaming service that has limited differentiated content with horizontal audience and revenue assumptions; unfortunately for Disney this is exactly what Iger hinted at in his announcement:

To be clear, both of these decisions are up in the air, but Iger’s comments are fundamentally at odds with each other: you reach everyone by having more content, not less, and by building a new sort of bundle (which is exactly what Netflix is doing). That means not only including Marvel and Star Wars but also content from non-Disney studios as well. Yes, that may seem antithetical to Disney, the only company that can rival Apple when it comes to fanatical control of how it is perceived by customers, but the company is rapidly losing the luxury of having cable companies do its dirty work.

On the other hand, if Disney insists on doing its own thing, limiting its service to its own differentiated content, it needs to charge the premium that such a strategy entails, and accept the smaller customer base that will result.

The Challenge of Culture

From my perspective the best approach is the horizontal one: content production is economically suited to a model predicated on maximum reach, and the Disney brand is uniquely capable of giving Netflix a run for its money when it comes to acquiring customers and building the streaming bundle of the future.

I wonder, though, if Disney, particularly under leadership that was so successful under the old model, is desperate enough to do what it takes to build a truly successful horizontal business. In some respects the challenge is even more difficult than Microsoft’s: in that case the company had to give up its business model to pursue a new opportunity that fit the fundamental nature of the company. I am suggesting Disney do the opposite: keep its business model — making money from everyone — while letting go of the need to control everything that is so inextricably tied up with the ability to create differentiation. It might be too much to ask.