In August 2011, just a day or two into my career at Microsoft, I sat in on a monthly review meeting for Hotmail (now known as Outlook.com); the product manager running the meeting was going through the various geographies and their relevant metrics — new users, churn, revenue, etc. — and it was, well, pretty boring. It was only later that I realized just how astounding “boring” was; a small group of people in a conference room going over numbers that represented hundreds of millions of people and dollars in revenue, and most of us cared far more about what was on the menu for lunch.

I’ve reflected on that meeting often over the years, particularly when it comes to Facebook and controversies like censoring too much, censoring too little, or “fake news”, and I was reminded of it again with this tweet:

And they paid in RUBLES. Seriously. https://t.co/D35tvhUEcj

Mark Warner, the senior Senator from Virginia, is referring to a Russian company, thought to be linked to the Kremlin’s propaganda efforts, having bought $100,000 worth of political ads on Facebook, some number of which directly mentioned 2016 presidential candidates Donald Trump and Hillary Clinton. Facebook has released limited details about the ads, likely due to its 2012 consent decree with the FTC, which bars the company from unilaterally making private information public, as well as the problematic precedent of releasing information without a clear order compelling said release. To that end, it was reported over the weekend that special counsel Robert Mueller received a much more comprehensive set of data from Facebook after obtaining a search warrant.

Even with all that context, though, I found Senator Warner’s tweet puzzling: how else would the propaganda group have paid? Facebook’s self-service ad portal lets you buy ads in 55 different currencies, including the Russian Ruble:1

That, though, brought me back to that Hotmail meeting: that I, and probably many more in the tech industry, find the idea of Facebook selling ads in rubles to strangers to be utterly unremarkable, even as thousands find it equally outrageous and damning, is a reminder of just how unprecedented and misunderstood aggregators like Facebook continue to be, and what a challenge it will be to regulate them.

Senator Warner, it should be noted, is considered one of the most technologically literate people in the entire Senate — and the richest. Warner originally made his fortune by facilitating the sale of cellular phone licenses; he then co-founded Columbia Capital, a venture capital firm which specialized in cellular businesses: the firm’s early investments included Nextel, BroadSoft, and MetroPCS.

A cellular network company is certainly a new kind of business that is similar to today’s tech giants in many respects:

These four characteristics may seem familiar: they are all parts of Aggregation Theory, and I’ve written about each of those components in the two years since I first wrote about the theory.2 There is one more piece, though, that I have only mentioned in passing: zero transaction costs. This is the piece that apparently sets Facebook beyond Senator Warner’s understanding,3 and it is perhaps the key reason why Facebook and other aggregators are unlike any other company we have seen before; oh, and it explains this Russian ad buy.

Go back to the generic cellular network company I discussed above, and think about what is entailed in adding a new customer (and leaving aside the marketing expenditure to make them aware of and desirous of the service in the first place):

While some of these activities could be automated, the reality is that the cost of customer management had a linear curve: more customers meant more costs. Moreover, these costs accumulated, limiting the natural size of any company; at some point the complexity of managing some finite number of customers across some finite number of geographic areas cost more than the marginal profit of adding one more customer, and that limited how big a company could grow (which, to be clear, could be very large indeed!).

What makes aggregators unique, though, is that thanks to the Internet they have zero transaction costs: for Google, or Airbnb, or Uber, or Netflix, or Amazon, or the online travel agents, adding one more customer is as simple as adding one more row in a database. Everything else is automated, from sign-up to billing to the delivery of the service in question. This is why all of these companies are global, often from day one, and, as I explained in Beyond Disruption, why they start at the high end of a market and work their way down.

Facebook and Google, though are a special case: they are (and yes, I know this is the least imaginative term ever) super-aggregators.

Start with supply: not only is the vast majority of online content accessible to Google’s search engine (unsurprisingly, the biggest exception is Facebook), but in fact that content wants to be discovered by Google. Nearly every site on the web has a sitemap that is intended not for humans but for web crawlers, Google’s in particularly, and there is an entire industry dedicated to search engine optimization (SEO). Netflix is on the opposite side of the spectrum here (unlike YouTube, it should be noted): the company has to actively source content and pay for it. Uber and Airbnb and Amazon are in the middle: theoretically there is an open platform for suppliers but there are costs involved in bringing them online.

That said, there are a few more companies that have a similar content model: Twitter, Snapchat, LinkedIn, Yelp, etc. All run on user-generated content augmented by professional content placing links or original material on their services. However, there is still one more thing that separates Facebook and Google from the rest: advertisers.

Super-aggregators not only have zero transaction costs when it comes to users and content, but also when it comes to making money. This is at the very core of why Google and Facebook are so much more powerful than any of the other purely information-centric networks. The vast majority of advertisers on both networks never deal with a human (and if they do, it’s in customer support functionality, not sales and account management): they simply use the self-serve ad products like the one pictured above (or a more comprehensive tool built on the companies’ self-serve API).

This is the level that the other social networks have not reached: Twitter grew revenue, but primarily through its sales team, which meant that costs increased inline with revenue; the company never gained the leverage that comes from having a self-serve ad platform (specifically, the self-serve platform costs are fixed but the revenue is marginal). 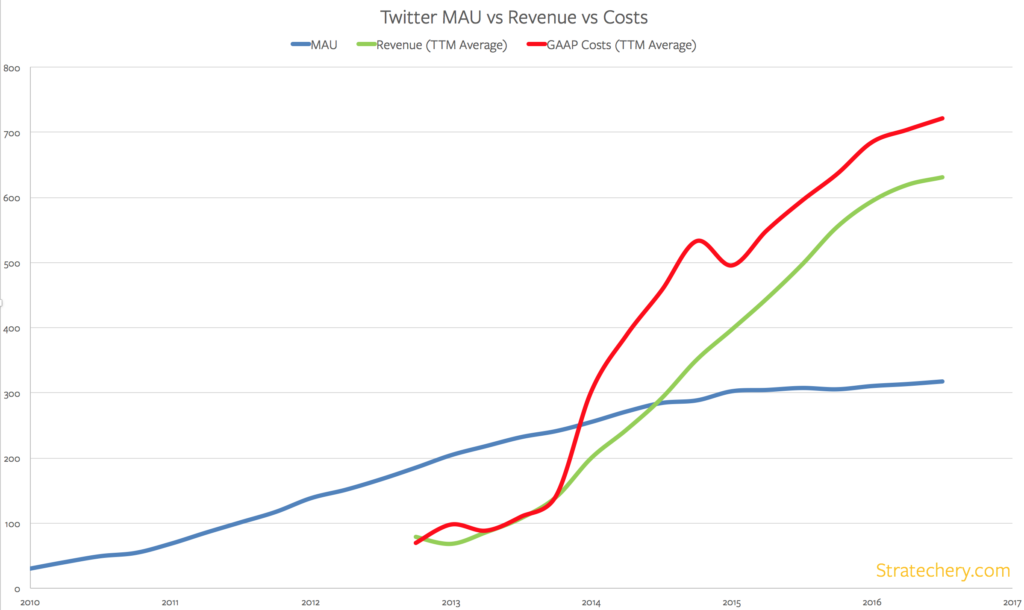 Snap is following in Twitter’s footsteps: to date the vast majority of the company’s revenue has come from its sales team; the company has a perfunctory API for self-serve ads, but most of the volume springs from the aforementioned deals made by its sales team. Similar stories can be told about LinkedIn, Yelp, and other advertising-based businesses.

This is why I was confused that Senator Warner made a big deal out of the fact Facebook was paid in Russian Rubles: the entire premise of the company’s revenue model is that anyone can run an ad without having to talk to another human, and obviously a key component of such a model is supporting multiple currencies.

Again, though, this is the first such model in economic history: it seems I am the one who was blinded by my having experienced the meaning of scale. In that Hotmail meeting everyone and everything was reduced to a number on a spreadsheet: the United States, Japan, Brazil, Russia, all were simply another row. So I naturally assume it is in the case of Facebook ads: that some advertisers buy in dollars, some in Yen, some in Real, others in Rubles is unremarkable to me, and, I suspect, many of the folks working at these companies.

And yet, it is not at all unrealistic that this be very remarkable to everyone else, even someone with the technical and business background of Senator Warner. It would immediately be eyebrow-raising should any of the companies he managed or was invested in suddenly started transacting in Russian Rubles! For a super-aggregator, though, it is not only unremarkable, it is the system working as designed.

This applies to the content of those ads, too: last week, when ProPublica reported that Facebook enabled anti-Semitic targeting, I told a friend that a similar story would come out about Google within a week; it only took one day. When you make something frictionless — which is another way of describing zero transaction costs — it becomes easier to do everything, both good and evil.

This should probably be another article — indeed, it’s an article I’ve been working towards for a long time now — but this appreciation of what Super-Aggreagators are, and how it is a Russian propaganda outfit could buy Facebook ads that likely broke the law, gives insight into a number of principles that should guide people like Senator Warner as they consider potential regulation:

There’s one final consideration that should apply to regulation, broadly: given that Google and Facebook are already well-established with businesses that serve users, suppliers, and advertisers in a virtuous cycle, it is unlikely that regulation of any kind will have meaningful effects on their bottom lines. Indeed, I expect Google and Facebook to be mostly cooperative with whatever regulation comes from these recent revelations.

Rather, the companies that will be hurt are those seeking to knock Google and Facebook off their perch; given that they are not yet super-aggregators, they will not have the feedback loops in place to overcome overly prescriptive regulation such that they can seriously challenge Google and Facebook.

For example, consider the much-touted General Data Protection Regulation (GDPR) set to take effect in the European Union next year. There is lot of excitement about how this regulation will limit Google and Facebook in particular, by, for example, limiting the use of personal data and enforcing data portability (and not just a PDF of your data — services will be required to build API access for easy export).

The reality, though, is that given that Google and Facebook make most of their money on their own sites, they will be hurt far less than competitive ad networks that work across multiple sites; that means that even more digital advertising money — which will continue to grow, regardless of regulation — will flow to Google and Facebook. Similarly, given that the data portability provisions explicitly exclude your social network — exporting your friends requires explicit approval from your friends — it will be that much harder to bootstrap a competitor.

This is the reality of regulation: as much as the largest incumbents may moan and groan, they are, in nearly all cases, the biggest beneficiaries. To be sure, that doesn’t mean regulation isn’t appropriate — it should be far more obvious to everyone that Russians were purchasing election-related ads on Facebook — but rather that it be expressly designed to limit the worst abuses and enable meaningful competitors, even if they accept payment in Russian Rubles.