The two dominant business models for venture-backed startups are advertising for consumer-focused companies, and Software-as-a-Service (SaaS) for business-focused ones. On one level, these business models are quite different: the former gives away software for free with the hope of convincing a third party to pay for access to users; the latter charges some portion of users directly. The underlying economics of both, though, are more similar than you might think — indeed, both are very much in line with venture-backed startups of the past.

Silicon Valley is, unsurprisingly given the name, built on silicon-based computer chips, and that goes for Silicon Valley venture capital, as well. Silicon-based chips have minimal marginal costs — sand is cheap! — but massive fixed costs: R&D on one hand, and the equipment to actually make the chips on the other. And while those two costs live on different parts of the income statement — the latter is a cost of revenue that impacts gross margins, while the former is “under the line” and an operational cost that only impacts overall profitability — the fundamental economic rationale for taking on venture capital is the same: spend a lot of money up-front to develop and build a product, and take advantage of minimal marginal costs to make it up in volume.

You can see how this model translated perfectly to software: marginal costs were even lower, and an even greater percentage of costs were R&D. Companies needed lots of money to get started, but those that succeeded could generate returns that vastly exceeded the amount of investment. This is certainly the case for today’s business models.

Advertising-based consumer companies spend huge amounts on R&D building products that appeal to users, although usually not a lot on sales and marketing to acquire users; consumer companies that break through to the scale necessary to support advertising rely on viral network effects. Where the sales and marketing spend comes is in courting advertisers; however, the most valuable consumers companies of all — the super-aggregators — generate the same sort of network effects allowing them to add advertisers in a scalable way as well.

This produces the ideal venture outcome: a company where users and revenue grow far more quickly than costs. 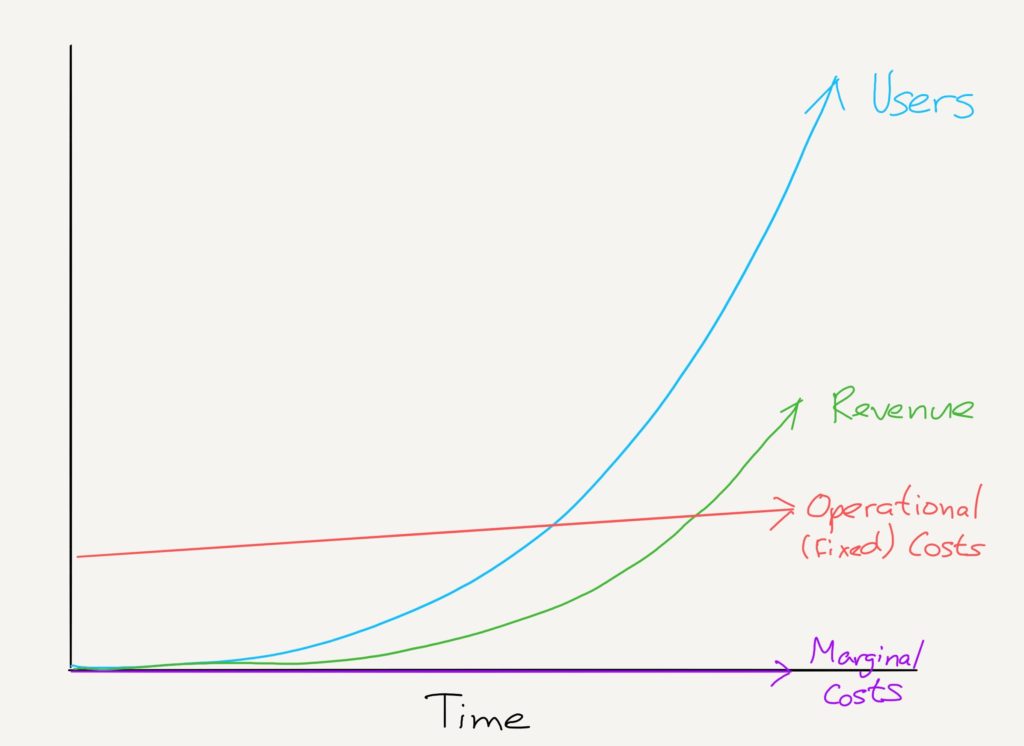 Again, this is possible because there are minimal marginal costs — more users are not necessarily more expensive. Of course fixed costs grow over time, but they only grow linearly — earning ever-increasing revenue on a relatively stable cost basis is the definition of scale.

SaaS businesses have the same sort of profile — the big difference is that revenue comes from users, and thus sales and marketing expenses are spent on gaining said users, not advertisers, but minimal marginal costs are the common thread.

In The Business of SaaS, one of the guides offered by Stripe Atlas, Patrick McKenzie writes:

Margins, to a first approximation, don’t matter. Most businesses care quite a bit about their cost-of-goods-sold (COGS), the cost to satisfy a marginal customer. While some platform businesses (like AWS) have material COGS, at the typical SaaS company, the primary source of value is the software and it can be replicated at an extremely low COGS. SaaS companies frequently spend less than 5~10% of their marginal revenue per customer on delivering the underlying service.

This allows SaaS entrepreneurs to almost ignore every factor of their unit economics except customer acquisition cost (CAC; the marginal spending on marketing and sales per customer added). If they’re quickly growing, the company can ignore every expense that doesn’t scale directly with the number of customers (i.e. engineering costs, general and administrative expenses, etc), on the assumption that growth at a sensible CAC will outrun anything on the expenses side of the ledger.

In other words, operational costs don’t matter in the long run, which is good news for Spotify, a venture-backed company with definite SaaS characteristics that filed for a direct listing last week. Spotify has increased monthly active users by 43% over the last three years and revenue by 448% over the last five; its fixed costs have largely tracked revenue:

SPOTIFY REVENUE AND FIXED COSTS (IN MILLIONS OF EUROS) 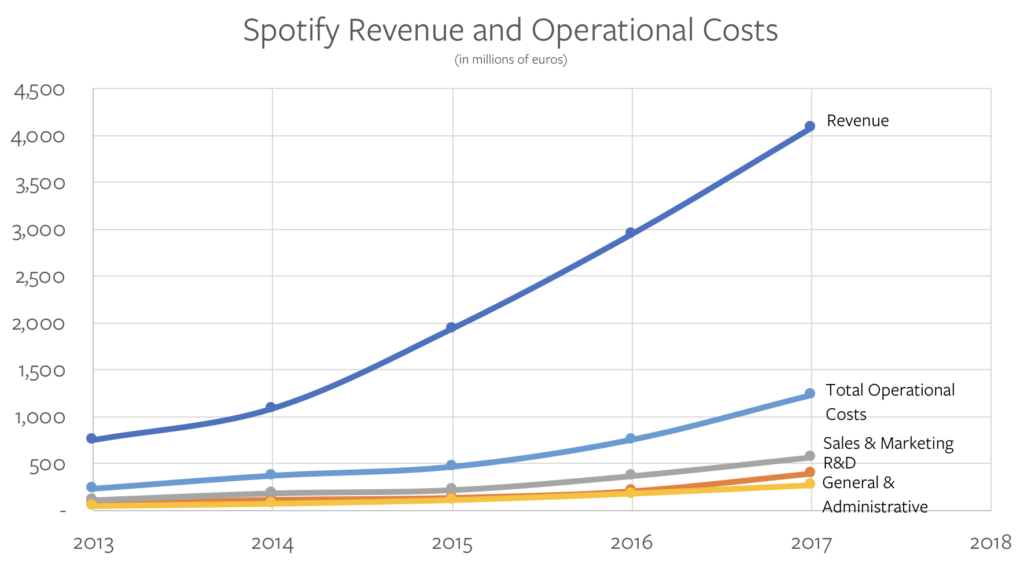 It is not exactly groundbreaking analysis to note that Spotify has significant marginal costs — specifically, the royalties it pays the music industry (not just record labels but also songwriters and publishers). Those are represented by Spotify’s Cost of Revenue:

Spotify negotiated new deals with the record labels last summer that resulted in lower royalty rates in exchange for guaranteed subscriber growth and the ability for the labels to make some releases exclusive to Spotify’s paid tier; you can see those lower rates reflected in Spotify’s increased margins.

That, though, is precisely the problem: Spotify’s margins are completely at the mercy of the record labels, and even after the rate change, the company is not just unprofitable, its losses are growing, at least in absolute euro terms: 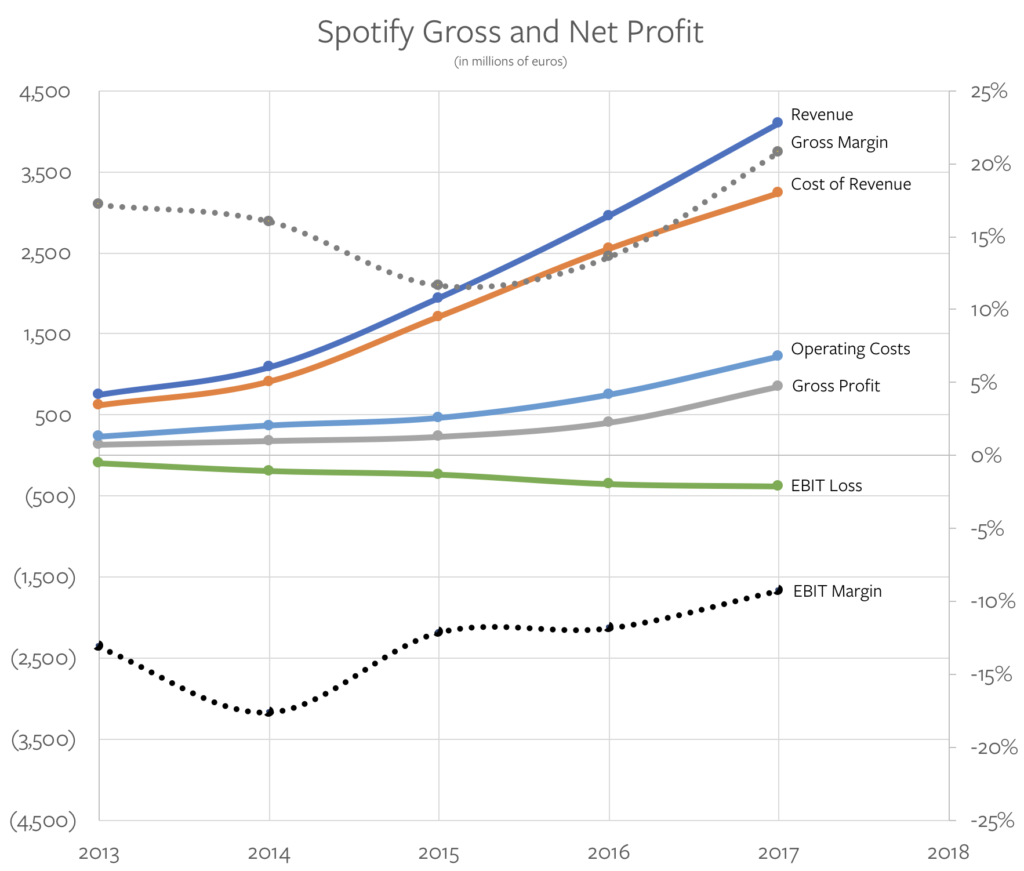 Moreover, it seems highly unlikely Spotify’s Cost of Revenue will improve much in the short-term: those record deals are locked in until at least next year, and they include “most-favored nation” provisions, which means that Spotify has to get Universal Music Group, Sony Music Entertainment, Warner Music Group, and Merlin (the representative for many independent labels), which own 85% of the music on Spotify as measured by streams, to all agree to reduce rates collectively. Making matters worse, the U.S. Copyright Royalty Board just increased the amount to be paid out to songwriters; Spotify said the change isn’t material, but it certainly isn’t in the right direction either.

There is one more possibility: Spotify could one day cut out the labels altogether — the idea certainly makes sense on a conceptual level. Spotify is in one sense an aggregator, in that it increasingly controls access to music listeners, and to the company’s credit, it has demonstrated the ability to exercise power via its control of music discovery and popular playlists.

The problem is that the music labels, as I wrote in The Great Unbundling, have been strengthened by Spotify as well:

The music industry, meanwhile, has, at least relative to newspapers, come out of the shift to the Internet in relatively good shape; while piracy drove the music labels into the arms of Apple, which unbundled the album into the song, streaming has rewarded the integration of back catalogs and new music with bundle economics: more and more users are willing to pay $10/month for access to everything, significantly increasing the average revenue per customer. The result is an industry that looks remarkably similar to the pre-Internet era:

Notice how little power Spotify and Apple Music have; neither has a sufficient user base to attract suppliers (artists) based on pure economics, in part because they don’t have access to back catalogs. Unlike newspapers, music labels built an integration that transcends distribution.

Spotify is an impressive product and company, and CEO Daniel Ek and team deserve credit for reaching this point. Being a true aggregator, though, means gaining power over supply; Spotify doesn’t have that — the company doesn’t even have control over its marginal costs — and it’s hard to see where the profits come from.

The power of the record labels and the resultant linkage of Spotify’s marginal costs to its overall revenue certainly makes Spotify a unique case compared to most zero marginal cost venture-backed companies: 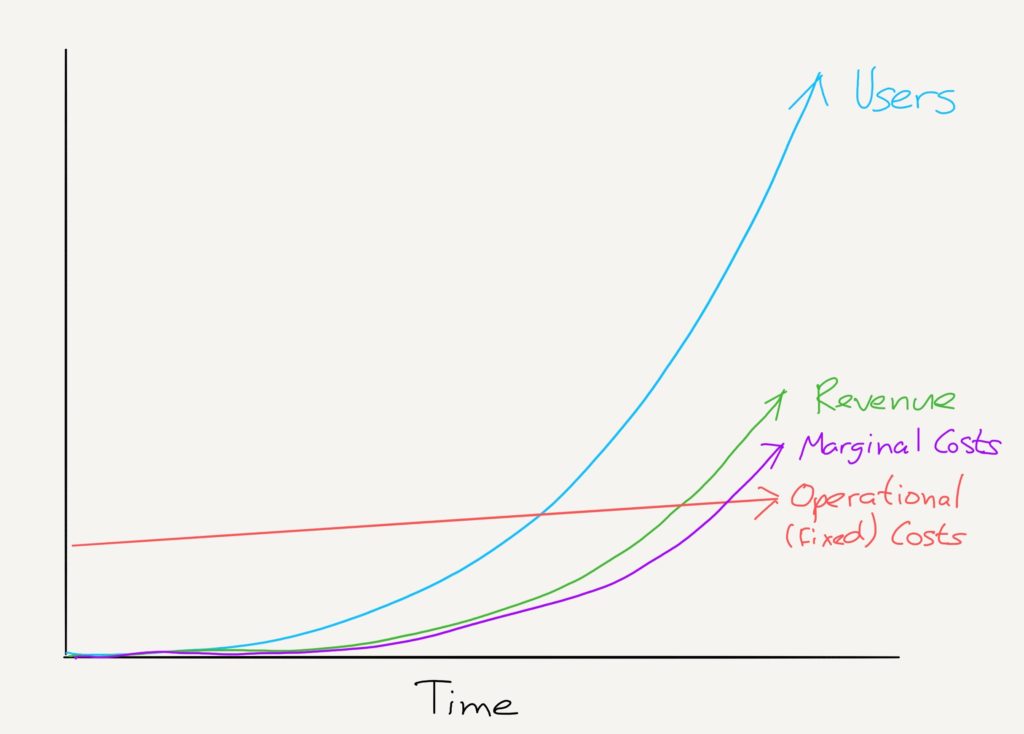 It’s worth noting, though, that Spotify is hardly the only well-known startup that has its cost of revenue linked to total revenue — at least from a certain perspective. Over the last few years there has been a third model of startup that has emerged: the so-called sharing economy, or Assets-as-a-Service (AaaS). When you spend $10 on an Uber or Lyft ride, around $7 goes to the driver; when you spend $100 on an Airbnb, $85 goes to the host,1 and so on and so forth.

This isn’t how these companies necessarily keep their books, to be clear: the top line number should exclude whatever is paid out to the driver or host etc. When thinking about how these companies should be managed, though, the situation isn’t much different than Spotify. Specifically:

I still believe in a future where Everything is a Service, and there’s no question that creating networks for everything will need a lot of venture capital. And make no mistake — there will continue to be capital available, because a network, once made, absolutely offers the sort of scalable revenue generation that makes generating significant profits an inevitability.

To that end, it is surely Spotify’s hope that the streaming market ends up being so big that the company’s low gross margin in percentage terms ends up large in absolute ones; even then those profits will come from operational excellence and efficient customer acquisition, not simply top-line growth.