Apple is, according to the Wall Street Journal, driving a hard bargain with publishers ahead of the launch of its rumored News subscription service:

Apple Inc.’s plan to create a subscription service for news is running into resistance from major publishers over the tech giant’s proposed financial terms, according to people familiar with the situation, complicating an initiative that is part of the company’s efforts to offset slowing iPhone sales. In its pitch to some news organizations, the Cupertino, Calif., company has said it would keep about half of the subscription revenue from the service, the people said. The service, described by industry executives as a “Netflix for news,” would allow users to read an unlimited amount of content from participating publishers for a monthly fee. It is expected to launch later this year as a paid tier of the Apple News app, the people said.

The rest of the revenue would go into a pool that would be divided among publishers according to the amount of time users spend engaged with their articles, the people said. Representatives from Apple have told publishers that the subscription service could be priced at about $10 a month, similar to Apple’s streaming music service, but the final price could change, some of the people said…

Probably the most obvious way to understand this story is that it, along with the report that Apple would have a launch event on March 25, appear to be attempts to negotiate through the media. I’m reminded of the January 2010 report in the Wall Street Journal that Apple’s impending tablet would cost $1,000; when Steve Jobs announced the iPad three weeks later, the $499 starting price seemed like a bargain. Perhaps leaking a 50/50 revenue share, along with an impending deadline for negotiations, is a way to make a 60/40 or 70/30 revenue share seem like a reasonable compromise?

The Growth of Apple News

Let’s back up for a moment: Apple News has grown to be a major force in publishing, at least in terms of traffic. According to a New York Times story that Apple cooperated with, the service “is read regularly by roughly 90 million people.” That has translated into traffic for news publishers that, according to Slate, often outpaces Facebook post-last January’s algorithm change.

The problem, as Digiday explained, is that traffic — which is almost completely realized within the Apple News app, not on publisher’s web pages — comes with minuscule amounts of revenue. Yes, Apple News allows for advertising, but that advertising is either sold (poorly) by Apple or sold directly by the publisher with no allowance for either programmatic ads nor data about users.

So why do publishers bother?

There are a number of factors that should ring familiar to anyone familiar with the travails of publishers on the Internet.

To start, Apple News readers visit Apple News and, for the most part, read what Apple News presents to them; the front-page may be human-selected, as Apple sought to make clear in that New York Times article, but just as is the case with algorithmic selection (which is what determines what users see for the rest of Apple News, it just happens to be called “Suggested by Siri”), no one publication is favored: 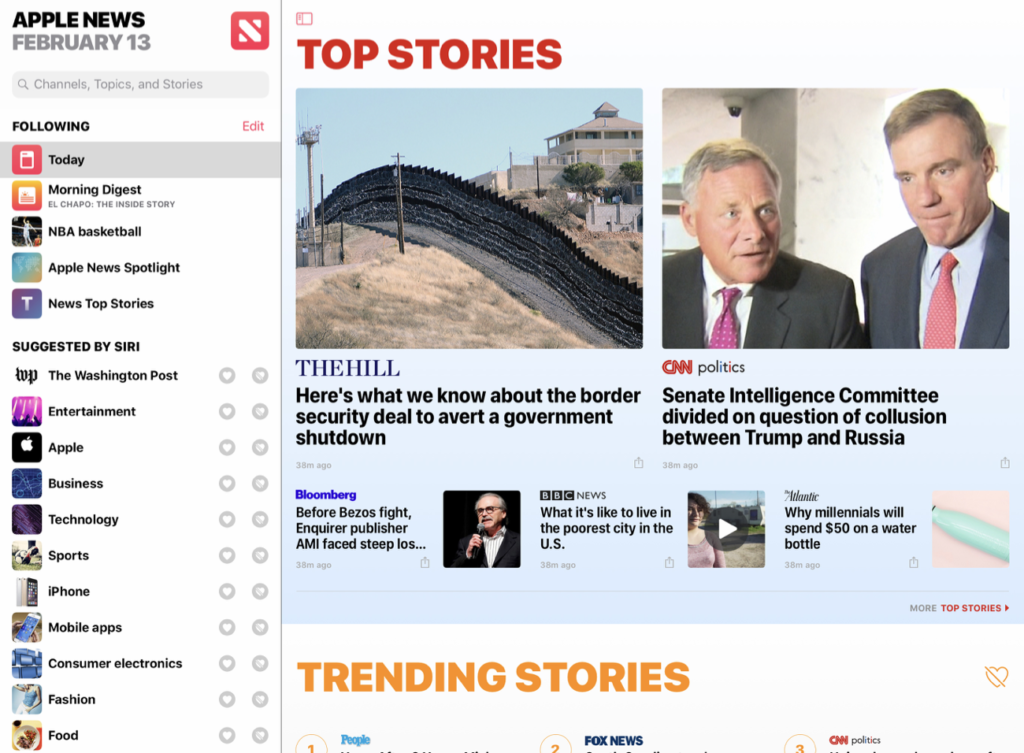 On one hand, this is obviously not good for publishers: there is limited wherewithal to build brand affinity, there is no customer data shared (for purposes of follow-up, much less ads), and as noted above, there really isn’t much money to be made.

On the other hand, what are publishers really giving up? Readers going to the Apple News app have already made the decision to not visit a particular publisher’s website directly, and, given that digital content has zero marginal cost, why not support Apple News on the off chance some article hits it big?

It should be noted that publisher pages within Apple News complicate this narrative a bit: on one hand, they are a place to build brand affinity; on the other hand, they are more likely to cannibalize direct visits to the publisher’s website. But how many Apple News users are likely to switch to a browser for a particular publisher should they leave Apple News?

What is happening is Aggregation: Apple News attracts the users, which means publishers are coming onto Apple’s platform on Apple’s terms, which makes Apple News more attractive to users, making publishers ever more reticent to leave even though they aren’t getting much out of the deal.

For suppliers, the antidote for Aggregation is to go direct to consumers; the key is to embrace the same forces that drive Aggregation. First, the addressable market should be the entire world, not just a limited geographic area. Second, the same sort of automated payment tools available to advertisers on Aggregators can be leveraged for consumers; indeed, the tools for consumers, particularly given the lower dollar amounts and decreased need for paperwork, can be as simple as Apple Pay, and they can scale indefinitely. Third, a freemium approach to content means that social networks can be used for user-generated marketing.

Apple News as currently construed is actually somewhat helpful in this regard: publishers can push subscription-only content (as well as free content) into Apple News, and give users the option to subscribe using the App Store. For example, the Wall Street Journal elected to make the piece that triggered this Article free: 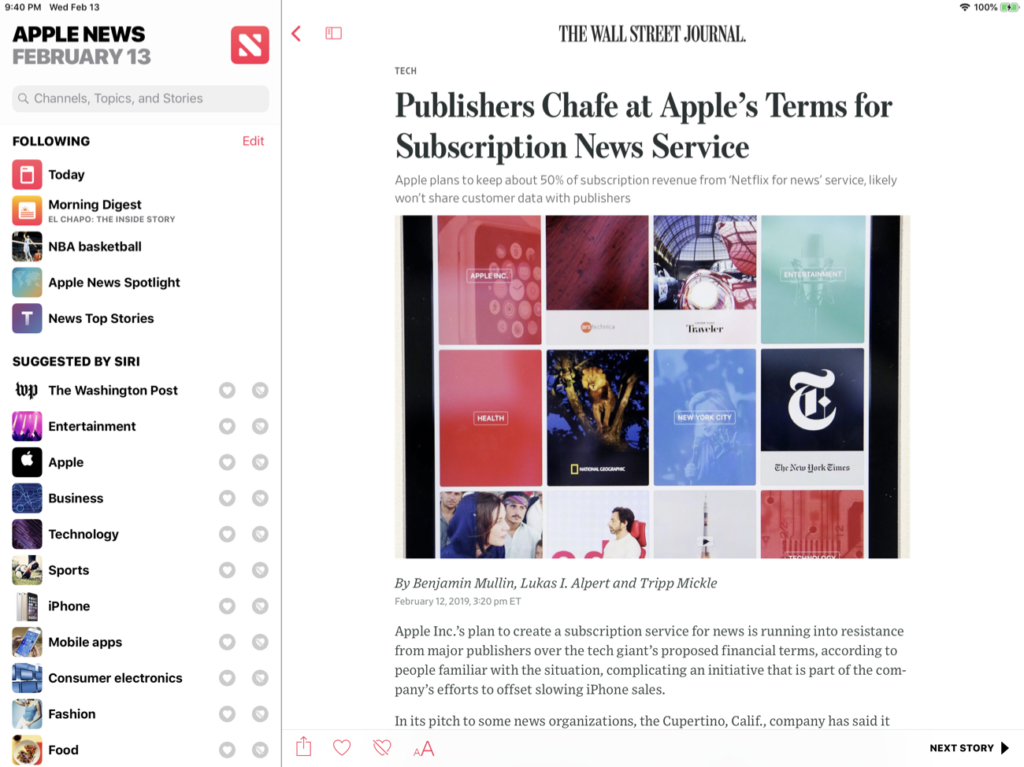 However, the next story over, about Google Cloud, requires a subscription: 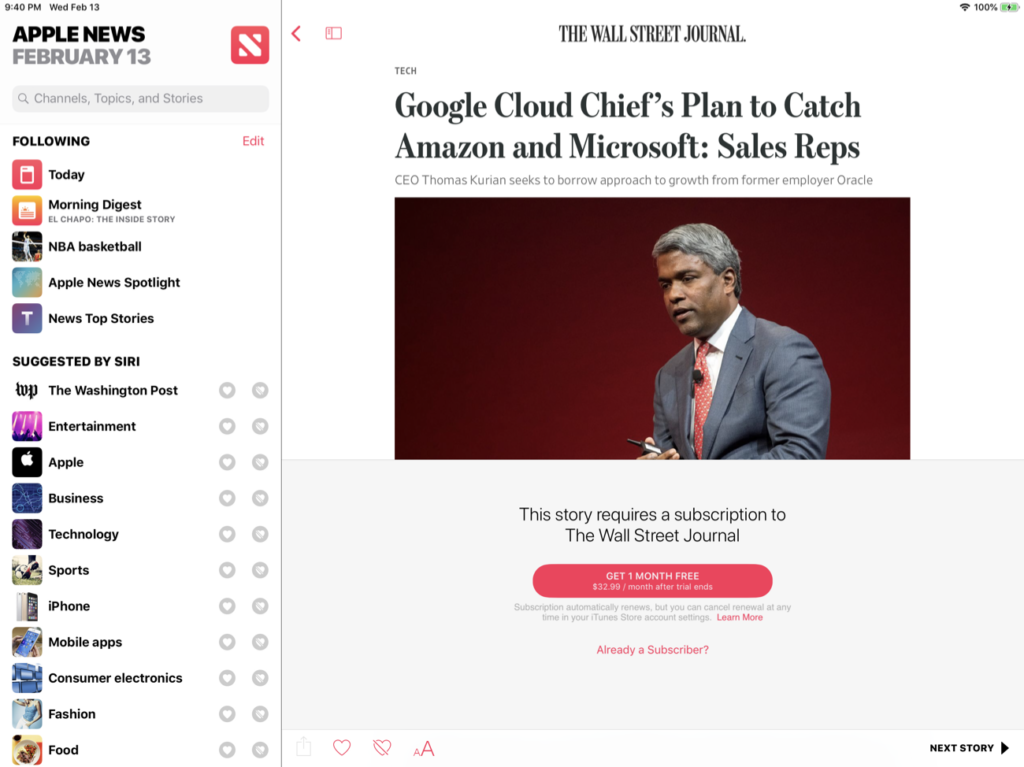 It’s not perfect: clicking on that subscription link means the publisher has to pay Apple 30% the first year and 15% after that, and they don’t get any customer data (unless the customer creates an account in order to use their subscription on other platforms). Still, to my mind it is somewhat less egregious than Apple’s restrictions on in-app purchase; Apple News is driving the customer to a publisher’s content and charging accordingly (as opposed to taking a tax simply because there is no alternative to the App Store), but at the end of the day the publisher is still establishing a direct paying relationship with a subscriber.

The Spotify of News

What Apple is reportedly building now, though, is decidedly different. The so-called “Netflix of News” — although, given that Apple will pay out on a marginal basis as opposed to buying content, a better descriptor would be the Spotify of News — would entail customers paying one monthly fee to Apple which Apple distributes to publishers based on what subscribers read.

Publishers should be very clear about the implications of this model: it is not a direct-to-consumer model. Rather, it is an Aggregation model that happens to monetize via subscriptions instead of ads. That means it has all of the same problems for publishers that are posed by Aggregators:

That last point is the most important, and should weigh heavily on publishers that have committed to the subscription model. What makes subscriptions work is an alignment between editorial and business model: the former is incentivized by quality and differentiation because the payoff is a customer with a high lifetime value; the New York Times put this succinctly in their 2020 Report:

We are, in the simplest terms, a subscription-first business. Our focus on subscribers sets us apart in crucial ways from many other media organizations. We are not trying to maximize clicks and sell low-margin advertising against them. We are not trying to win a pageviews arms race. We believe that the more sound business strategy for The Times is to provide journalism so strong that several million people around the world are willing to pay for it. Of course, this strategy is also deeply in tune with our longtime values. Our incentives point us toward journalistic excellence.

The proposed Apple News model, on the other hand, which pays out according to reader engagement, pushes in the opposite direction — the Facebook direction. The motivation is “to maximize clicks” and “win a pageviews arms race”, with some “time-spent” variables mixed in; sure, the driver isn’t low-margin advertising, but shifting the means of monetization doesn’t change the ends as far as incentives go.

The Cost of Apple News

It is absolutely worth noting what a great deal for consumers an Apple News subscription bundle would be: I totally get the idea of subscription fatigue, and having one place to get all of the best journalism would be amazing. That, though, doesn’t mean that Apple News wouldn’t be an Aggregator: that confirms it! Aggregators win because consumers prefer them, leaving publishers no choice but to go where the consumers are.

To that end, I am sure that a significant number of publications will sign up for Apple’s offering; clearly the company is confident enough to leak a date. And, frankly, many publications should: most publishers are already locked into the volume game when it comes to their editorial direction, and Apple News subscription payouts will be additive to the bottom line.

Publishers that have truly committed to subscriptions, though, should say no: not only will it be difficult to make up revenue that will be cannibalized lower per-customer payouts from Apple News, but more importantly a reversion to a model predicated on page views will hurt their business in the long run. This is especially the case if Apple News becomes a major revenue driver; yes, digital content can be distributed with zero marginal cost, but the incentive cost should not be discounted — it works directly against the quality imperative that is the critical factor in making the Aggregator-avoiding direct-to-consumer business model work.