As I noted in the introduction of The TikTok War, yesterday’s article was actually about two distinct trends; I’ll follow-up on them separately.

In 2017, John Garnaut, a former journalist in China turned speech writer for Australian Prime Minister Malcolm Turnbull, and China policy advisor, gave a speech to the Australian government entitled “Engineers of the Soul: Ideology in Xi Jinping’s China”; Bill Bishop published the text of the speech on Sinocism in 2019. It is very much worth your time, and I can certainly identify with his opening:

I’m here as someone who was born into the economics tribe and has been forced to gradually concede ground to the security camp. This retreat has taken place over the course of a decade, one story at a time, as I’ve had to accept that economic openness does not inevitably lead to political openness. Not when you have a political regime that is both capable and committed to ensuring it doesn’t happen. Politics isn’t everything but there’s no country on earth where it is more omnipresent, with the exception of North Korea. And there is no political system that is as tightly bound to ideology.

In the work I was doing upstairs in this building I went out of my way to remove ideology from my analysis of how China is impacting on Australia and our region. It was simply too alien and too difficult to digest. In order to make sense to time-poor leaders it was easier to “normalise” events, actions and concepts by framing them in more familiar terms. This approach of “normalising” China also served to sidestep painful normative debates about what China is, where it is going and what it wants. It was a way of avoiding a food fight about who is pro-or-anti China. Taking the “Communist Party” out of “China” was a way of de-activating the autoimmune response that can otherwise kill productive conversation.

This pragmatism has worked pretty well. We’ve taken the China conversation to a new level of sophistication over the past year or so. But by stripping out ideology we are giving up on building a framework which has explanatory and predictive value. At some point, given the reach that China has into Australia, we will have to make a serious attempt to read the ideological road map that frames the language, perceptions and decisions of Chinese leaders. If we are ever going to map the Communist Party genome then we need to read the ideological DNA.

This tracks my coverage of China on Stratechery. While I have been open about my hesitance in covering Chinese company financials due to the level of opacity involved (notably, the Trump administration is reportedly going to end the agreement that allowed U.S. oversight of Chinese auditors for companies listed on U.S. stock exchanges, largely because of a lack of compliance), China has always been interesting as a country that was truly mobile-first, and at massive scale. And, of course, it was a major market for Apple.

Over the last year, though, like Garnaut, I have felt compelled to be more outspoken about the impact of China’s politics on tech. First, in China, Leverage, and Values, I highlighted that China’s vision of the role of technology was fundamentally different than the West’s; in the China Cultural Clash, I warned that China wasn’t simply interested in being different, but in exporting those differences to the West. And finally, yesterday’s The TikTok War is very much a call to action on the part of the West, rooted above all in a recognition that this isn’t simply an economic battle, but an ideological one.

I will freely admit, as I have all along, that I come at these issues as a Westerner, as an American, and as a believer in liberalism. This is not about being anti-China; rather, it is about respecting China, and recognizing the Chinese Communist Party for the ideological foe that it is, which Garnaut’s essay details. He concludes:

The key point about Communist Party ideology — the unbroken thread that runs from Lenin through Stalin, Mao and Xi — is that the party is and always has defined itself as being in perpetual struggle with the “hostile” forces of Western liberalism…Mr Xi did not invent this ideological project but he has hugely reinvigorated it. For the first time since Mao we have a leader who talks and acts like he really means it…

Already, Xi has shown that the subversive promise of the internet can be inverted. In the space of five years, with the assistance of Big Data science and Artificial Intelligence, he has been bending the Internet from an instrument of democratization into a tool of omniscient control. The journey to Utopia is still in progress but first we must pass through a cyber-enabled dystopia in order to defeat the forces of counter-revolution. The audacity of this project is breathtaking. And so too are the implications.

The challenge for us is that Xi’s project of total ideological control does not stop at China’s borders. It is packaged to travel with Chinese students, tourists, migrants and especially money. It flows through the channels of the Chinese language internet, pushes into all the world’s major media and cultural spaces and generally keeps pace with and even anticipates China’s increasingly global interests. In my opinion, if you’re in the business of intelligence, defense or international relations; or trade, economic policy or market regulation; or arts, higher education or preserving the integrity of our democratic system — in other words, just about any substantial policy question whatsoever — then you will need a working knowledge of Marxism-Leninism-Mao Zedong Thought. And maybe, after the 19th Party Congress, you’ll need “Xi Jinping Thought” too.

(Tanner Greer, who I quoted in yesterday’s article, wrote two excellent blog posts explaining where he agreed and disagreed with Garnaut. The first explains why we should expect China to push its ideology out; the second explains why for many Chinese “totalitarian” is too strong a word — for now.)

There is one other point that is important to make: it is absolutely a valid distinction that Facebook is a U.S. company and TikTok is a Chinese one. To put in the plainest possible terms, Chinese social networks censor criticism of Chairman Xi, while U.S. social networks are boycotted for declining to censor President Trump; you can go to prison for mocking Xi, and you can rocket to stardom by mocking Trump — on TikTok, no less! Make no mistake, the U.S. is deeply flawed, but the differences in government control of information and ideas are real and stark, and it is dangerously cynical to suggest otherwise. (That noted, I have been pointing out Facebook’s latent political power and very real political impact since before Trump was elected).

I’m increasingly convinced that Facebook has an absolutely massive business opportunity on its hands: to capture, almost completely, the imminent wave of advertising dollars deserting TV for digital. To do so, though, will require an embrace of Facebook’s status as the “homepage of the Internet” (on mobile in particular), and an abdication of sorts of the social interactions that built the company.

This, in broad strokes, is another way of explaining ByteDance’s fundamental insight: people just want to be entertained, and while social networks are one way to generate content that entertains them, it is not the only way. Still, I can’t take a full victory lap for that 2015 article:

It’s worth considering, though, just how much users value what their friends have to say versus what professional media organizations produce. Again, as I noted above, Facebook made the 2013 decision to increase the value of newsworthy links for a reason, and in the time since, BuzzFeed in particular has proven that there is a consistent and repeatable way to not only reach a large number of people but to compel them to share content as well. Was Krugman wrong because he didn’t appreciate the relative worth people put on what folks in their network wanted to say, or because he didn’t appreciate that people in their network may not have much to say but a wealth of information to share?

What I got right is that your social network doesn’t generate enough compelling content, but, like Facebook, I assumed that the alternative was professional content makers. The key to TikTok, as I explained yesterday, is that it is not a social network at all; the better analogy is YouTube, and if you think of TikTok as being a mobile-first YouTube, the strategic opening is obvious.

What is interesting to point out is why it was inevitable that Facebook missed this: first, Facebook views itself first-and-foremost as a social network, so it is disinclined to see that as a liability. Second, that view was reinforced by the way in which Facebook took on Snapchat. The point of The Audacity of Copying Well is that Facebook leveraged Instagram’s social network to halt Snapchat’s growth, which only reinforced that the network was Facebook’s greatest asset, making the TikTok blindspot even larger.

Another way to look at the Facebook/Snapchat approach versus the YouTube/TikTok one is in terms of the Moat Map, a concept I coined in 2018. The concept, to be honest, isn’t completely flushed out, but I think this comparison point is helpful.

My first observation was that some platforms had commoditized suppliers, while others had differentiated ones:

If you put these two observations together, you get the Moat Map: 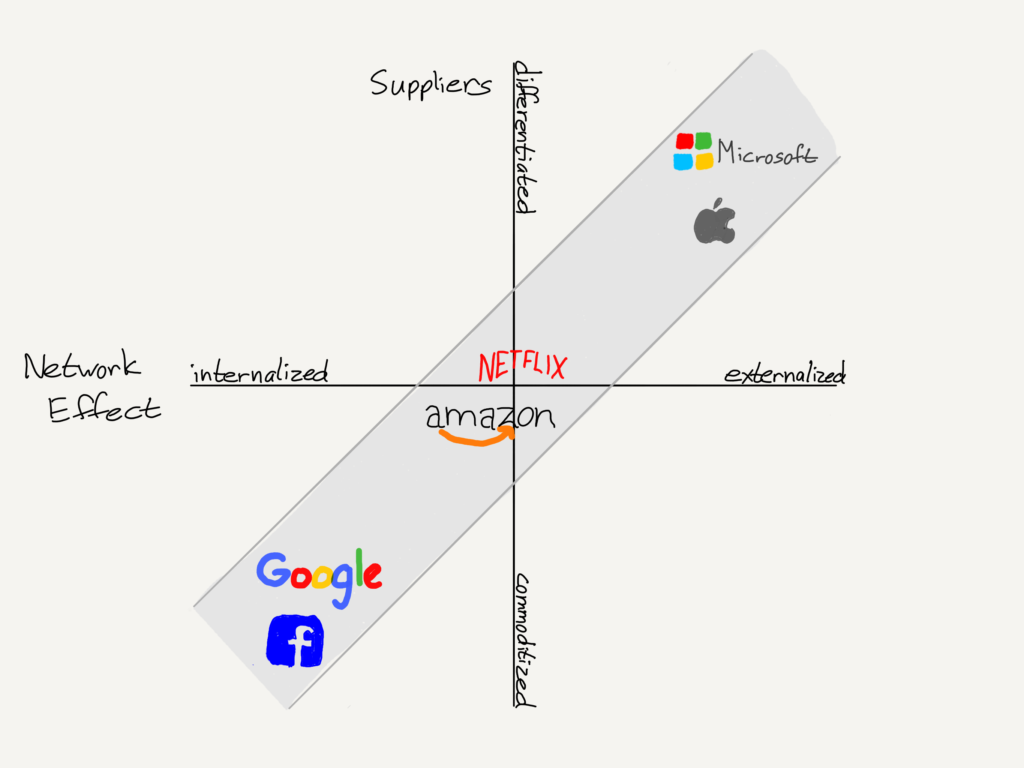 Again, this is not one of my more fully-fleshed out concepts, but you can see how YouTube and TikTok are more two-sided networks, which is to say that supply is more differentiated, which is to say that both platforms breed stars. Facebook and Snapchat, on the other hand, commoditize everything in service of the network.

What is interesting to consider is what this says about defensibility. Snapchat is actually a great example here: Instagram Stories dramatically slowed user growth, but it didn’t actually cost Snapchat its core user base. That’s pretty impressive! YouTube, meanwhile, makes it up in volume: its coverage is so broad that users are not going anywhere, even if stars are on other platforms. How TikTok fits, meanwhile, is still not clear: there are certainly stars, but there are also communities, and above all, there is the algorithm, the ultimate power, and the ultimate commoditizer.