High praise indeed, but don’t worry, I’m not going to write about sports. Rather, it’s the idea of comps that is interesting.

A comp for Apple, for example, could be Sony in the 1980s. Both are/were iconic brands, both a symbol of a time and place. Sony founded their business on the transistor radio, an underwhelming yet massively more accessible alternative to the status quo; Apple found success with the Apple II, vastly underpowered compared to a minicomputer, yet similarly cheaper and more accessible. Sony revolutionized televisions with the Trinitron; Apple revolutionized PCs with the Mac. And, ultimately, both became cultural touchstones through music, Sony with the Walkman, and Apple with the iPod.

Equally importantly, both had/have similar business models: vertical integration, with money made on hardware, and both had/have similar product-focused cultures. It’s not a perfect comparison, but no comp is. It’s just a heuristic, a way to make sense of the present and ideally predict the future.

Another obvious example is Google today and Microsoft fifteen years ago. Both have horizontal business models, both seek to commoditize the layers under them (Microsoft the hardware, Google the OS), and both are heavily engineering-driven.

So what about Amazon? What is their comp?

In fact, the answer seems obvious, even as it illuminates why so many struggle to wrap their head around the company: Amazon is the modern day Sears and Roebuck (their comp is not a traditional tech company).

Sears and Roebuck was founded by Richard Sears, a railroad station agent who came by a shipment of watches at a good price, and quickly discovered he could sell them – and a great many other things – to rural dwellers without easy access to big cities.

The first Sears catalog was published in 1888, and within 7 years the catalog was 532-pages, containing everything from sewing machines to bicycles; sales were growing just as quickly, doubling between 1893 and 1895.

Sears’ success was due to something very rare in business: a dominant strategy. Usually, strategy is about tradeoffs. Do you want to have high quality, or low prices? Do you want to iterate quickly, or create the big launch? Do you want to segment the market and deliver multiple offerings, or focus on one product and gain returns to scale?

A dominant strategy, on the other hand, is AND, not OR. High quality and low prices. Fast iteration and big launches. Segmented market and returns to scale.

This was the case with Sears. If you consider price and selection to be two of essential components of retail, well, Sears had an infinitely greater selection than general stores, and better prices as well. 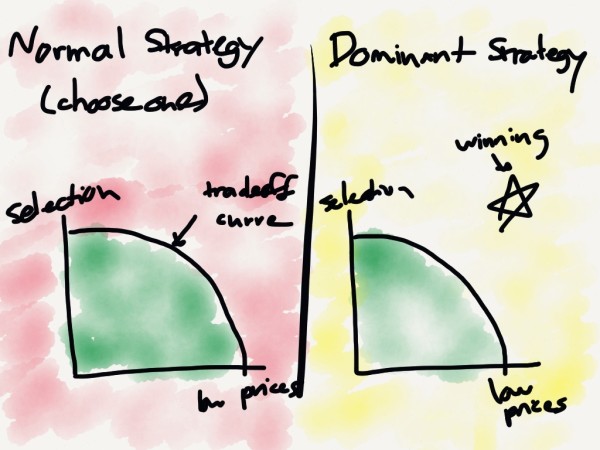 Of course you still had to wait for your order to arrive – at least general stores had convenience on their side!

And then Sears opened retail stores. The company became dominant in three dimensions, and profited handsomely for it. For decades Sears and Roebuck was one of the richest companies in the world.

Amazon has followed an extremely similar path. Jeff Bezos’ critical insight when he founded Amazon was that the Internet allowed a retailer to have both (effectively) infinite selection AND lower prices (because you didn’t need to maintain a limited-in-size-yet-expensive-due-to-location retail space). In other words, Amazon was founded on the premise of there being a dominant strategy: better selection AND better prices – the exact same as Sears.

And, just like Sears, Amazon has added convenience. No, they haven’t opened retail stores; instead they created the amazing Amazon Prime. Prime is the reason my family made 173 separate orders from Amazon in 2012: it’s so much more convenient to order toothpaste the moment you open the last tube than it is to make a trip to Target. And Amazon is pushing even further down this route, testing same-day delivery in multiple markets for everything from said toothpaste to TVs to tomatoes.

Amazon is dominant, and a run of success similar to the 90 years Sears spent on top looks to be very much in play. Looking backwards, investing in Sears in 1890 turned out better than investing in Sony in 1950; that, more than anything, explains the relative performance of Amazon and Apple in the stock market.