It has been years since Microsoft upstaged an Apple Keynote (such things usually run in the opposite direction), but that is exactly what happened yesterday with the former’s $26.2 billion purchase of LinkedIn overshadowing Apple’s impressive yet iterative announcements at their annual Worldwide Developer’s Conference (WWDC). And yet, despite the contrast in expectations (zero versus high) and reactions (“What?!?” versus “Makes Sense”) there is a certain symmetry to the news: both are doubling down on their strategies, and it’s debatable which is taking the most risk by doing so.

In its own small way perhaps the most surprising — and in many respects, encouraging — aspect of Microsoft’s purchase of LinkedIn was just how unexpected it was: a company with a notorious history of cutthroat boardroom politics not only pulled off the largest acquisition in its history without anyone knowing, it actually sat on the news regarding a signed letter of intent for a month! Granted, that meant limiting the information to an exceptionally small number of people, but there has been a lot of evidence over the past two years that Microsoft under CEO Satya Nadella has, at least at the highest levels of management, been more focused and aligned on where Microsoft needs to go than at any point under former CEO Steve Ballmer.

It was Steve Ballmer who led Microsoft’s previous largest acquisition, that of Nokia in 2013, a deal that from day one made no sense (and that was opposed by Nadella). It is that deal, though, that is perhaps the best place to start from when it comes to understanding this one.

I marveled last month at how adroitly Nadella had killed the Windows Phone business (or to put it more accurately, allowed Windows to figure out on their own that the platform had been dead from the beginning). The wind down of that business, though, and the ongoing shift of Windows to effectively “maintenance mode”, opens up room in Microsoft’s R&D budget — about 13% of revenue — for something new, so why not LinkedIn? Leaving aside the purchase price, LinkedIn slides right into the Windows Phone void when it comes to Microsoft’s investment in the future, with the benefit of being a business that has actual upside.

I do believe that upside is magnified significantly by Microsoft: should LinkedIn’s Sales Navigator, for example, sell in to 100% of the Microsoft Dynamics CRM user base, a good portion of this deal would be paid for; on the flipside, Dynamics now becomes a much more compelling offering in its ongoing competition with Salesforce (the most likely candidate for the rumored competitive bidder), Oracle, and SAP. And, of course, Microsoft’s Office products become that much more compelling with far deeper LinkedIn integration than was possible when they were two different companies (privacy concerns are much more easily solved when it’s the same company!).

I think, though, there is a deeper benefit that alters the trajectory of Microsoft’s productivity business in particular. I’ve written previously how Microsoft’s enterprise approach has been fundamentally upended by the cloud: when compatibility and ease-of-integration are no longer the controlling factors for IT buyers, Microsoft’s focus on lock-in and a good-enough user experience are simply not enough, and to the company’s credit both its Azure and Office 365 divisions have embraced a future that will be won on the user experience on all devices, not just Microsoft-controlled ones. Still, the question of who would own identity — previously the linchpin of Microsoft’s enterprise lock-in (thanks to Active Directory) — has been an open one.

What is potentially transformative about this deal is a future where Microsoft retains its focus on enterprise while shifting the locus of its business from companies to employees. I have written at length about the importance of owning the end user, but we the end users have multiple identities, one of which is our professional life, and that is a graph in which LinkedIn is nearly unchallenged. To put it another way, the “consumerization of IT” — a tagline favored by Ballmer — it not only about creating a compelling user experience in IT products but about treating enterprise users as, well, consumers: with LinkedIn Microsoft can form a direct relationship with its end users that goes far beyond the CIO and opens up a huge array of opportunities that not only were unavailable previously, but are also critical in a world where CIOs matter less than they ever have previously, and where employees change jobs constantly. Instead of starting from scratch with every new hire, it is Microsoft that is positioned to provide the glue that connects enterprise workers no matter where they are.

And, for what it’s worth, Microsoft got a deal: I think LinkedIn’s February stock slide was justified, but the fact remains that Microsoft is buying the social network for a price that would have been unthinkable six months ago, and the upside that justified the former stock price remains: LinkedIn knows more about its users than anyone outside of Facebook — and when it comes to our professional lives, they know more. This is the most valuable data in the world.

The most obvious criticism of this deal is the opportunity cost: what might that $26 billion have been spent on otherwise? Even with this deal Microsoft’s existential threat remains: why would a new company buy any of their products? This acquisition doesn’t solve that in a way a pairing of, say, Dropbox and Slack would (two tastes that would be better together, and who also aren’t selling), but then again, Microsoft has far more money than they do time: LinkedIn builds a bridge for their productivity business to a new world centered around end users, not corporations, and it may even give Microsoft’s inevitable compete products a head start. Imagine this: instead of simply moving Active Directory to the cloud, Microsoft is potentially making LinkedIn the central repository of identity for all business-based interactions: chat, email, and more, and it’s an identity that endures for an end user’s professional life, because it’s managed by the user, not by their transient employer. It’s genuinely exciting, and shocking though it may have been, I think that’s worth $26 billion.

More broadly, this has to be seen as the final blow to the notion that Windows is Microsoft’s focus; as late as 2014 I argued the company should split itself up, simply because the “Windows first” culture was so entrenched, but Nadella has done a remarkable job reorganizing and reorienting the company towards a future where Windows is one of many clients for Microsoft’s service offerings, and if it wasn’t clear to the rank-and-file yet, it surely must be now. Microsoft is doubling-down on the cloud and on productivity, and now there are 26 billion reasons to believe them.

Apple’s WWDC announcements, meanwhile, were perhaps most notable for what they didn’t include, including no mention of iMessage on Android, and no significant discussion about Siri beyond the rumored and sorely needed incremental improvements (and even there, somewhat limited: Siri’s API is only open to a subset of applications).

Instead the keynote was about enhancing and deepening the value that comes from living the full Apple lifestyle: now your Watch unlocks your Mac, and your desktop is available on your iPhone. You can pay for things in your Mac’s browser using the iPhone, and control your house via the Apple TV from your lock screen. And yes, Messages got a massive update that I am very excited about (more tomorrow as I review the keynote in-depth), but its features are only available if you’re messaging other iPhone users: pay up or get left out.

Just as notable were the new things that weren’t announced: Apple is allowing users to delete pre-installed apps, and while there is no news about defining new default apps, should Apple do so the company would be on the path towards making its hardware mastery even more compelling by virtue of enabling services companies like Google and Microsoft to enhance the experience of using an iPhone.

This enhancement, of course, theoretically weakens Apple in the long run, as it squanders the ability of the company to leverage its hardware advantage into a services lock-in, but given my conviction on the power of culture I’m not sure this is a bad thing; here Steve Jobs’ advice rings true:

I think if you do something and it turns out pretty good, then you should go do something else wonderful, not dwell on it for too long. Just figure out what’s next.

For Apple what is next should almost certainly be guided by what the company is the best at: integrating hardware and software to deliver a user experience so compelling that consumers continue to self-select into the company’s own orbit, not building infrastructure on top of platforms it doesn’t control.

That, though, is also what made me nervous about the company’s announcements. CEO Tim Cook emphasized at the beginning of the keynote, in his words, “why we do what we do at Apple.” 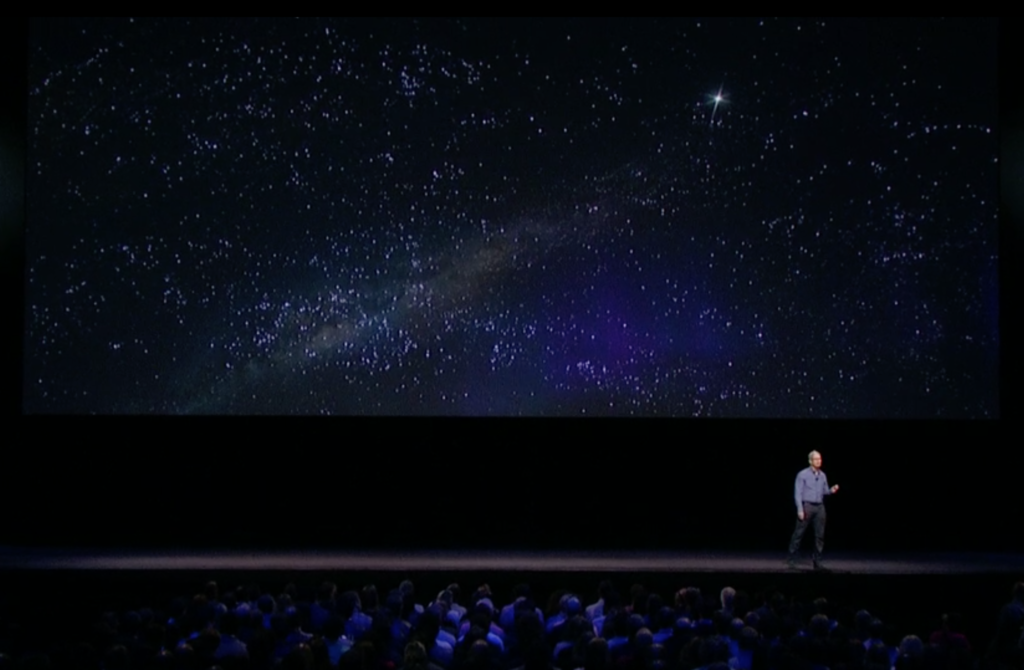 Our North Star has always been about improving people’s lives by creating great products that change the world.

Several of the product announcements, though, like enhancements to photos and Siri, seemed to care more about an absolutist view of privacy than about the best possible end user experience; make no mistake, I value privacy, but everything is a trade-off. At what point might Apple’s strenuous defense of privacy shift from a principled stand to a convenient reason to not be competitive with alternatives like Google photos or Alexa? Or, to put it another way, when does principle become an excuse for not being competitive on the user experience that has been Apple’s biggest differentiator for its entire existence?

Apple’s keynote was notable for its having doubled-down on what the company excels at: providing a better experience provided you pay Apple’s hardware margins. In this their announcement echoes Microsoft’s decision to double down on owning professional productivity and services. The difference, though, is in the timing: Microsoft is (finally) pivoting to the approach they should have adopted a decade ago, and while that has cost the company a lot of time and increased their risk, it is exciting to see them closer to the beginning than the end of their strategy. The question for Apple is where on that spectrum do they lie: for how long will a hardware-centric strategy drive growth, and just how much is Apple willing to change its culture to ensure it takes advantage of new opportunities and not simply preserve what it has?

Or maybe it doesn’t matter: odds are the biggest news from Monday will be Snapchat’s launch of an advertising API; the world goes on, value moves up the stack, and attention to the “story of the day” is all too often a trailing indicator.