I’ve written previously that the iPad was helping to unbundle the general-purpose PC:

From the Humpty Dumpty PC:

The iPad and other appliance-like devices have actually had the opposite effect [as compared to the iPhone] on computing. Many of the activities one used to do on a general-purpose personal computer are now done on machines better suited to the task at hand.

I think I got this precisely backwards.

If you start with the Mac (or PC – they’re interchangeable in this analysis), then the benefit of the iPad is all about its simplicity: touch and the limited nature of iOS make some computing activities easier and more approachable, especially for people like my mom. A Mac (or PC), meanwhile, can do everything an iPad can do and more (although it must bear the cost of complexity): 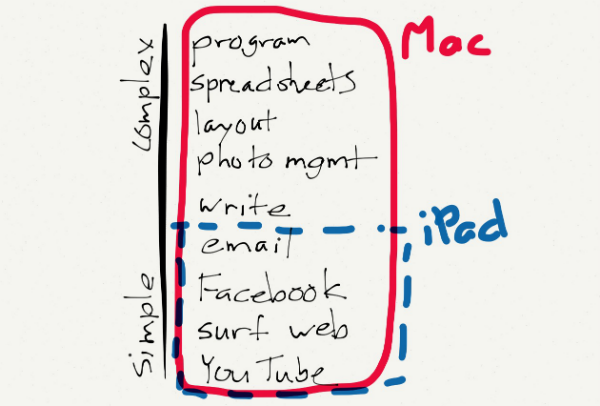 The problem with this thinking is the focus on “computing.” The things we humans wish to do are so much more varied: sing, play, dance, even, I suppose, make spreadsheets. It is a spectrum, of which traditional “compute” activities are only a small part:

What makes the iPad so magical is that its simplicity – a piece of glass that becomes whatever app you choose to run – allows it to serve a much broader range of potential human activity than your typical Mac or PC.

iPads are used for traditional computer activities, but they’re also used for gaming, for music-making, for drawing, even, apparently,1 for sumo wrestling. What is interesting, though, is that for almost all of these activities, the iPad is not the best possible tool.

A dedicated device like a console will, at least according to some measures of performance, deliver a superior gaming experience (and a gaming PC, even better). But a console can only play games, and it is complex (and, again, a gaming PC even moreso). An iPad is simple, and it does other things as well.

An actual instrument is a superior music experience, but said instrument can only do one thing, and there is nothing simple about it. An iPad is infinitely more approachable, and it does other things as well.

It’s the exact same role the iPad plays with regards to the Mac or PC. A Mac or PC is a superior experience for traditional computing activities, at least according to traditional measurements like speed or efficiency, but an iPad is simpler and more approachable, and it does other things as well.

(This, of course, is why Macs aren’t going away. In fact, as Phil Schiller noted at the end of this great Macworld piece marking the Mac’s 30-year anniversary, the iPad has freed the Mac to focus even more on power users going forward.)

Ultimately, it is the iPad that is in fact general purpose. It does lots of things in an approachable way, albeit not as well as something that is built specifically for the task at hand. The Mac or PC, on the other hand, is a specialized device, best compared to the grand piano in the living room:2 unrivaled in the hands of a master, and increasingly ignored by everyone else.