PCs just suffered their worse quarter ever. From the WSJ:

World-wide PC shipments fell 10% last year, research firms Gartner Inc. and IDC said Thursday, the worst-ever sales slump for the industry. Both companies have been tracking personal computer sales since the 1980s. Computer makers have been hurt as consumers and businesses spend more time on smartphones and tablets, and are slower to replace aging PCs.

Here are the last 10 years of PC Sales from IDC (thanks to Charles Arthur, who wrote a great column today about PC OEMs, for the full set of numbers): 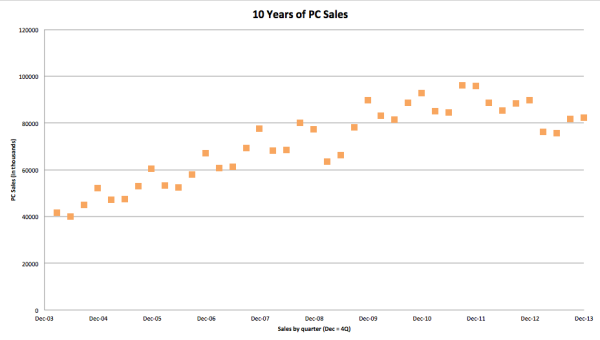 The WSJ – and prevailing wisdom – blames two factors for the decline of PCs: PCs have become “good enough,” lengthening the replacement cycle, and more and more time is being spent on tablets and other appliance-like devices.

However, I don’t think these factors are independent; it’s not just that tablets occupy more of a user’s time, but that by doing so they make any performance issues on one’s PC less pressing simply because you use it less. To put it another way, users are likely to have a higher standard for their primary computing device than they are a secondary one; as PCs become secondary devices for more and more people the standard for “good enough” becomes lower and lower.

Looking at year-over-year growth certainly suggests that tablets are the bigger factor – note the step decrease in growth in 2010, the year the iPad was released:1 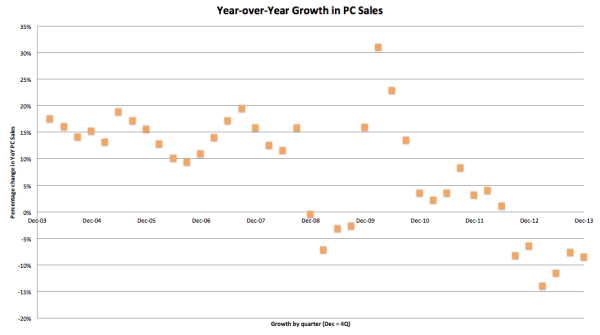 This was particularly worrisome for Microsoft; the only way that Microsoft makes money (in the consumer market) is through users buying new computers and the associated licenses (this is why Bing’s failure was so critical; by failing to build profitable online services, Microsoft has no way of monetizing consumers over time). This means that people using Windows are in effect worthless to Microsoft; they need people to buy Windows, which usually means buying a new computer.

This was the context for Windows 8, which was meant to address both of the problems facing PCs:

However, the exact opposite happened. Look again at the year-over-year growth chart: there is the big change I alluded to in 2010, and another big change in 2012, when Windows 8 came out. It seems clear that Windows 8 made things worse.

I laid out the reason why in Chromebooks and the Cost of Complexity:

In other words, instead of alleviating the problems facing PCs – no reason to buy – Windows 8’s increased complexity added a reason not to buy. That was certainly the case in my family: in early 2013, when my father asked me for advice on a Windows computer,2 I found myself advising him to seek out Windows 7.3 Were he to have had a suitable computer, I likely would have advised him to do nothing at all.

It’s difficult to see where Microsoft goes from here; contrary to what you might expect, there is still minimal overlap between Windows 8 and Windows Phone, meaning apps made for one are incompatible with the other.4 Abandoning either means effectively starting from zero in that respective form factor – and pissing off a lot of partners. Yet there’s little question in my mind that the touch environment is hastening the decline of PCs suited for the Windows desktop, even as the desktop ruins what is honestly a rather delightful tablet experience.

Microsoft’s trump card remains Office,5 a product with power that remains under-appreciated by most in Silicon Valley (e.g. my dad’s job). However, the complexities of Windows are rapidly dragging Office down; one of the most critical decisions facing the next CEO6 is whether or not to unburden Office from the Windows strategy tax and leave Windows to figure it out on its own.