For a company famed for its engineering culture, you wouldn’t expect a video at Google’s annual I/O developer conference to have such emotional resonance. And yet, just watch (I have included the context around the video in question, which starts at the 2:33 mark):

“I liked that very much.” 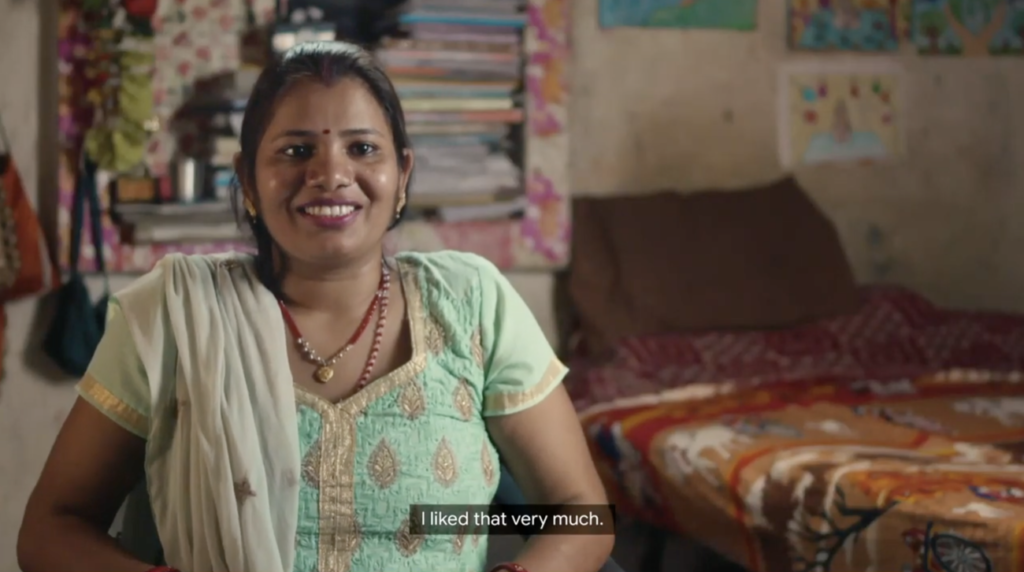 This was the most direct statement of what was a clear theme from Google’s entire keynote:
“Technology, particularly Google’s technology, is a good thing, and we are going to remind you why you like it.”

As he opened the keynote, CEO Sundar Pichai, as he always does, repeated Google’s mission statements: 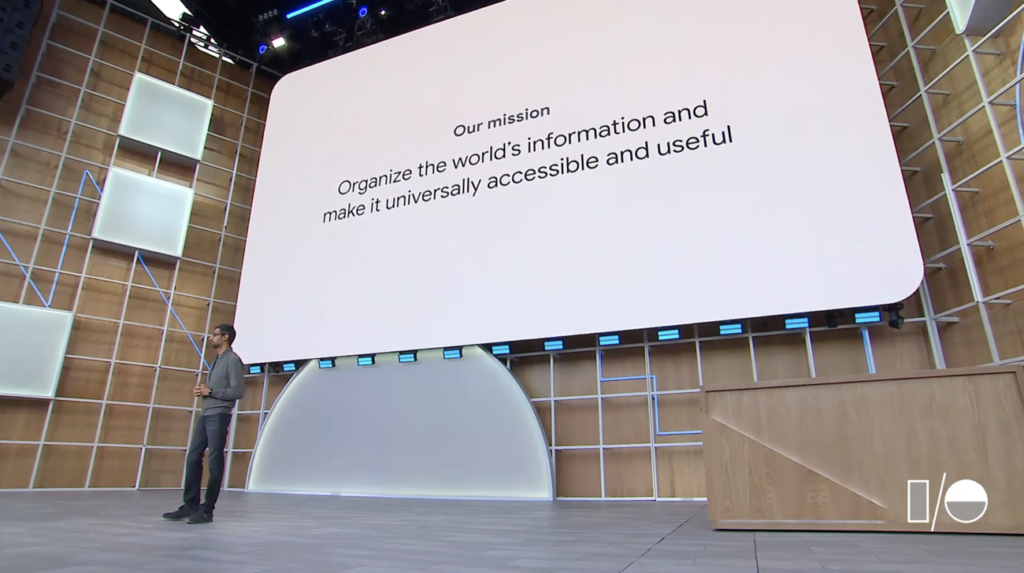 It all begins with our mission to organize the world’s information and make it universally accessible and useful, and today, our mission feels as relevant as ever.

Pichai, though, quickly pivoted to something rather different than simply organizing and presenting information:

The way we approach it is constantly evolving. We are moving from a company that helps you find answers to a company that helps you get things done…We want our products to work harder for you in the context of your job, your home, and your life, and they all share a single goal: to be helpful, so we can be there for you in moments big and small over the course of your day.

In short, the mission statement may be the same, but what that means for Google and its products has shifted:

Our goal is to build a more helpful Google for everyone. And when we say helpful, we mean giving you the tools to increase your knowledge, success, health, and happiness. We feel so privileged to be developing products for billions of users, and with that scale comes a deep sense of responsibility to create things that improve people’s lives. By focusing on these fundamental attributes, we can empower individuals and benefit society as a whole.

This set the stage for the rest of the keynote, including the video above: Google spent most of the keynote demonstrating — both with actual products, and a whole bunch of vaporware — how Google could take a much more proactive role in its users’ lives in ways they ought appreciate.

To be sure, not all of the demos were of unassailably positive use cases like helping an illiterate person navigate the world; take, for example, this demonstration of Duplex for the Web:

With the caveat that this is one of the pieces of vaporware I referenced earlier (Duplex, it should be noted, did finally launch several months after last year’s Google I/O), the demonstration is very impressive. What is worth noting, though, is the degree to which the demo relies on Google’s having access to your data; to that end, perhaps the most striking takeaway is that Google didn’t bother hiding this fact: 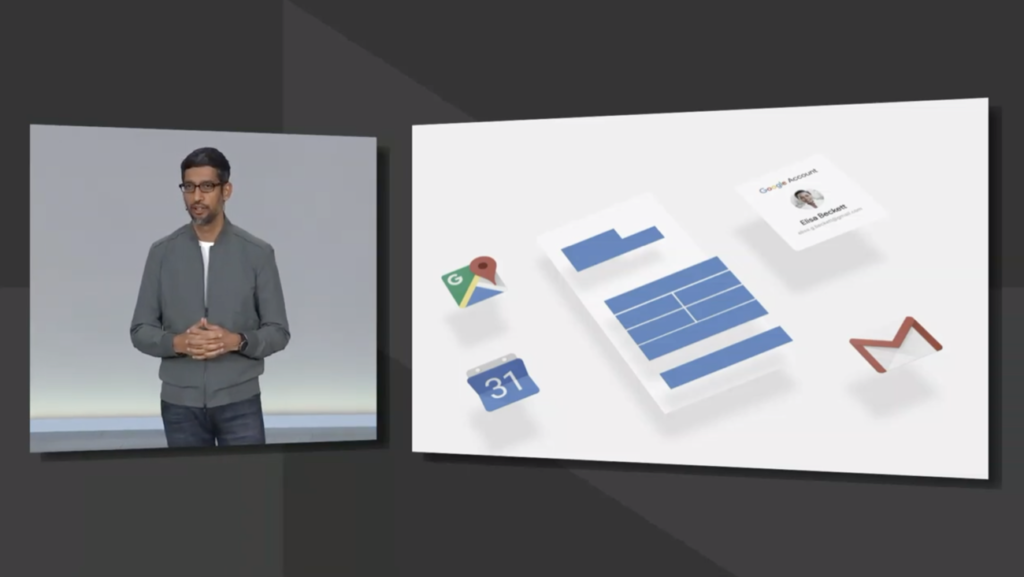 Notice that Aparna Chennapragada, the Vice President of Google’s AR, VR, and Vision-based Products whose video I opened with, makes the same point:

What you are seeing here is text-to-speech, computer vision, the power of translate, and 20 years of language understanding from search, all coming together.

To put it more succinctly: “Yes, we collect a lot of data. But that data makes amazing things possible.”

There was one more thing Chennapragada said at the end of her presentation:

The power to read is the power to buy a train ticket, to shop in a store, to follow the news. It’s the power to get things done, so we want to make this feature accessible to as many people as possible.

This is another feather in Google’s cap: it really does serve everyone in the way a company like Apple does not. Pichai made this point as well:

So far, we have talked about building a more helpful Google. It is equally important to us it for everyone. “For everyone” is a core philosophy for us at Google. That’s why from the earliest days Search works the same whether you’re a professor at Stanford or a student in rural Indonesia. It’s why we build affordable laptops for classrooms everywhere. And it’s why we care about the experience on low-cost phones in countries where users are just starting to come on-line, with the same passion as we do with premium phones.

What was unmentioned is that this is very much a Strategy Credit. Google spends billions of dollars on research and development and global-scaling infrastructure in order to deliver superior products to, first and foremost, users on premium phones (who have a huge amount of overlap with the set of customers most attractive to advertisers). That expenditure, though, is a fixed cost, while serving a marginal user is effectively free; it follows, then, that the best way to leverage those costs is to serve as many people as possible, even if the revenue from doing so is quite meager, at least for now.

To be clear, to say that something is a Strategy Credit is not a bad thing: it is simply an observation that doing the “right thing” requires no trade-offs when it comes to a company’s core business model; I originally created the term to explain why Apple could commit to not collecting data in a way that a company like Google could not.

Even so, it is striking how Google leaned into its core business model during the keynote: while Facebook likes to talk about connecting everyone, the company mostly tries to have its privacy cake and eat it too, that is, talk a lot about privacy and major moves it claims it is making in that direction, while actually changing nothing about its core business (or acknowledging that those moves are for competitive reasons).

Google, on the other hand, didn’t just admit it collects data, it highlighted how that collection makes Google more helpful. Google didn’t just admit that its goal is to be the Aggregator of information for every customer on earth, it bragged about that fact. And Google certainly didn’t engage in any self-effacing comments about how technology could be used for both good and bad: the entire keynote was arguing that technology is not only good, it is going to get better, and Google will lead the way.

There should be, to be sure, concerns about Google believing their own hype: many of the problems with YouTube, for example, stem from The Pollyannish Assumption that treats technology as an inherent good instead of an amoral force that makes everything — both positive outcomes and negative ones — easier and more efficient to achieve.

At the same time, from a purely strategic perspective, the positive message makes sense. Presuming that everything about technology is bad is just as mistaken as the opposite perspective, and the fact of the matter is that lots of people like Google products, and reminding them of that fact is to Google’s long-term benefit.

Moreover, a world of assistants and machine-learning based products is very much to Google’s advantage: the argument to not simply tolerate Google’s collection of data, but to actually give them more, is less about some lame case about better-targeted ads but about making actually useful products better. The better-targeted ads are a Strategy Credit!

It certainly appears that Google is pressing its advantage: after several years of including iPhones in Google I/O demos and/or alluding to products coming out on iOS — a welcome correction to The Android Detour — the only mention of iPhones was in a camera comparison to Google’s Pixel phone.1 Notably, Pixel’s headline feature — its camera — is very Google-like; Sabrina Ellis, Vice President of Product Management, said while introducing the $399 Pixel 3a:

Delivering premium features with high performance on a phone at this price point has been a huge engineering challenge, and I’m really proud of what our team has been able to accomplish with Pixel 3a…What Pixel is really known for is its incredible camera. With software optimizations we found a way to bring our exclusive camera features and our industry-leading image quality into Pixel 3a. So photos look stunning in any light. What other smartphone cameras try to do with expensive hardware, we can deliver with software and AI, including high-end computational photography.

While phones are certainly not a zero marginal cost item, the point is that Google applies overwhelming computer resources that can be leveraged through software instead of premium hardware, lowering the price of a phone, thus allowing it to be sold more broadly (better leveraging Google’s investment).

At the same time, while many of today’s trends are in Google’s favor, the Pixel is a reminder that the company still has significant challenges: Google has struggled to sell Pixels not because it hasn’t invested in a quality phone, but because it hasn’t invested in marketing and distribution. To that end, what was even more notable than the Pixel 3a price point is the fact it will be available on more than one U.S. carrier for the first time; unfortunately for Google, that is only one country, and there remain the massive investments in marketing necessary to become a major smartphone player.

More importantly, while Google Assistant continues to impress — putting everything on device promises a major breakthrough in speed, a major limiting factor for Assistants today — it is not at all clear what Google’s business model is. It is hard to imagine anything as profitable as search ads, which benefit not only from precise targeting — the user explicitly says what they want! — but also an auction format that leverages the user to pick winners, and incentivizes those winners to overpay for the chance of forming an ongoing relationship with that user.

Indeed, this was both the promise and pitfall of Google’s overall presentation: organizing the world’s information was (relatively) easy when that information was widely available, and it was easy to monetize. Everything was aligned. The future, though, is a lot messier: getting information is more difficult, presenting that information is more challenging, and making money is very much an open question. Just because Google is better positioned in this race than anyone else doesn’t matter quite as much when the race is harder, even as the prize is less lucrative, while an increasing number of spectators are cheering for failure. Might as well bring cheerleaders!